Langley Township prepared for snow and ice on the community’s roads by holding a snow plow rodeo on Wednesday.

Drivers had to navigate a number of obstacles on the Township’s Operations Centre work yard, including a narrow curving course between pylons, a “tire push” in which they had to use the plow to put a tire lying on its side onto a target, and a game of soccer, in which they tried to knock a ball through one of two goals.

They also had to try to parallel park their full-sized dump trucks, complete with plows, in a relatively small space.

The purpose of Wednesday’s events is to help train drivers and other staff for the season of snow and ice, said Brian Edey, the Township’s roads operations manager.

The rodeo was one of just seven sessions that were held for groups of 12 to 14 staff members of the course of the day.

Other events included Plowing 101, operator responsibilities, defensive driving, and equipment overviews focused on tandem plows and the brine system. Drivers are reviewing everything from maintenance to how to load up salt.

While most of the people taking part were Township staffers, another group of about 30 people came out from various other local municipalities to watch the preparations and pick up tips for their own communities, said Edey.

Langley has seen some rough winters in recent years, with heavier than expected snow and ice in a few.

“So far, so good, no snow yet,” said Edey about this season.

The overall prediction this year is for cold and wet, which hopefully means that any snow that does fall will melt relatively quickly, Edey said.

That said, the Township has been getting ready for other possible weather conditions.

A new storage bin has been built, which gives the Township capacity to hold 6,000 tons of salt.

To put that into perspective, a typical winter sees the Township use 4,000 to 6,000 tons of salt on local roads.

“I think we’re in good shape on that aspect,” said Edey.

There are also restocking contracts in place in case the winter turns out to be very bad and supplies need to be replenished before spring.

READ MORE: How much does your city spend per person on snow removal? 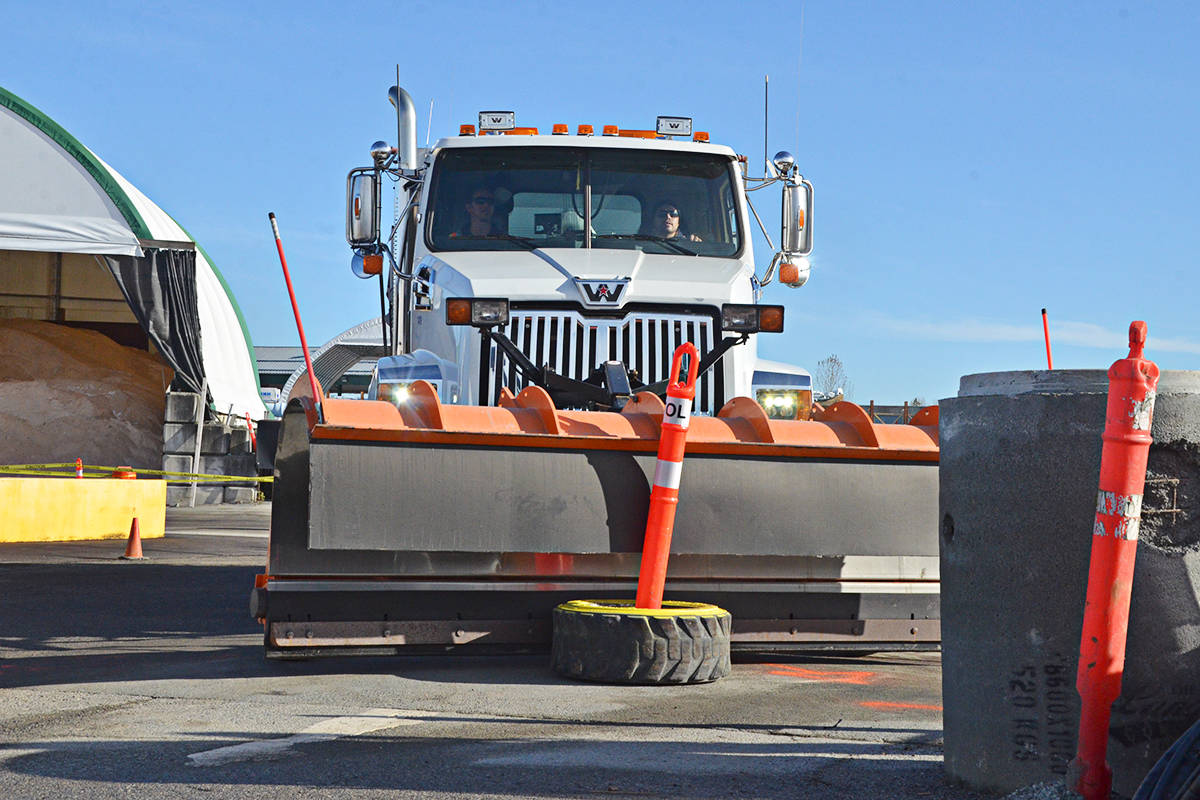 A driver aims for the target in the tire push segment of the snow plow rodeo held by Langley Township on Wednesday. (Matthew Claxton/Langley Advance Times)

Aldergrove cadets march on BC Place at half-time for veterans