“Street lights and some restoration work remains [to fill in the holes where the utility poles used to be] ,” Ruhl told the Langley Advance Times.

Coun. Eric Woodward, who was president of the Fort Langley BIA at the time the undergrounding was proposed, called it “fabulous.”

Woodward called it “a great deal for the taxpayer” because it is being funded two-thirds by Fort Langley businesses over 20 years.

Eliminating the tangle of wires was not without controversy.

Approved in 2012, the plan to bury utility poles and wires in Fort Langley’s commercial core passed by a narrow 51.5 per cent of owners of property in the Local Area Service covered by the petition.

It was opposed by the Langley Heritage Society, which argued the wires may have been unsightly but they have never posed a hazard.

Other critics objected to the street-level transformer boxes.

An unsigned internal memo from the Township engineering division to council said the idea of burying the new boxes was raised by municipal staff with BC Hydro, which rejected the notion.

“BC Hydro advised that they will not allow the undergrounding of their transformer infrastructure,” the memo said.

At the time it was announced, the project was projected to cost the benefiting property owners $3 million, and Township taxpayers $1 million 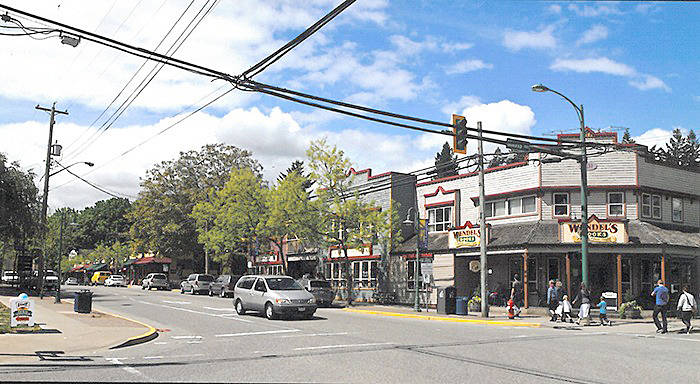 A ‘before’ picture of the Fort Langley core with the power lines. (File photo)

B.C. owner of horse that died of heart attack wants drivers to slow down

9 killed in Ohio in second U.S. mass shooting within 24 hours