Two great-grandparents from Aldergrove, Robert and Joan Dyson, would like anyone concerned about getting immunized for COVID-19 to know it is really no big deal.

There is hardly any waiting, and it doesn’t hurt a bit, Robert, 89, and Joan, 87, told the Langley Advance Times on Wednesday, March 24, the day after they got their shots.

They reported only a slight soreness from the needles.

“I’m a little tender in my left arm,” Joan described, “when I reach out.”

Robert reported much the same.

“It’s a little bit swollen, but it doesn’t hurt,” he told the Langley Advance Times.

Both admitted to being to being “a little apprehensive” after seeing some of the images of people getting their shots.

“It looked so large,” she laughed.

Robert was concerned abut the schedule, wondering if they would have to wait a long time.

John is immunized and is looking forward to getting back to work. He’s 92. Watch here to find out what he plans to do.#BCimmUNITY #SeniorsFirst pic.twitter.com/1E1LDvbCu4

When the Fraser Health Agency (FHA) started accepting bookings for people in their age group, their daughter Regena made the appointment for them at the immunization clinic held in the parking lot of Kwantlen Polytechnic University in Langley City.

Regena used the online booking at the FHA website to make the appointments.

They arrived a little early for their 10:30 a.m. appointment on Tuesday, March 23, and both said it couldn’t have gone any better.

“The people had it all set up pretty good.,” Robert noted.

They didn’t even have to get out of the car.

Robert got his shot first, after he pulled up in his car and quickly removed one jacket sleeve to reveal the short-sleeved t shirt he was wearing for the occasion.

Everything went tickety-boo,” he commented.

Then it was Joan’s turn. The needle, she was pleased to report, was tiny, and the people who administered it were pleasant.

“Everybody was so polite,” she remarked.

They’ve been told they will get their follow-up booster shots in about three months.

“They’ll give us a call, they said,” Robert reported.

As of Wednesday, March 24, 582,634 doses of Pfizer-BioNTech, Moderna and AstraZeneca-SII COVID-19 vaccines have been administered in B.C., 87,180 of which were second doses.

Vaccine appointment bookings were open for people 76 or older, and Indigenous people over 55.

In the near future, immunizations will start taking place at the Langley Events Centre (LEC), one of several new sites announced Tuesday by the FHA.

Dale Saip, senior vice president of the Vancouver Giants, said the organization “is proud to be working with our partners at the Langley Event Centre in support of the vaccination efforts. Our management team and facility staff look forward to assisting the Fraser Health Authority health professionals to the benefit of our community.”

Clinics in Burnaby, New Westminster, and Surrey are also in the works. 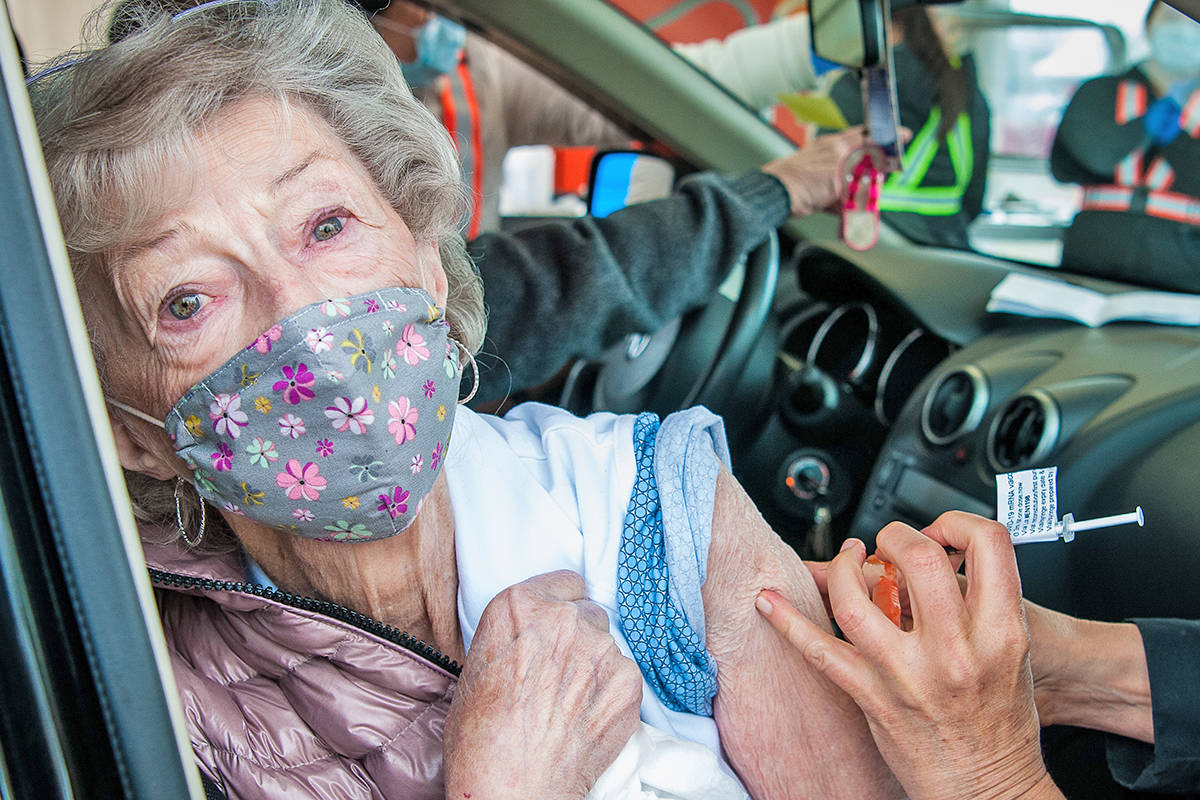