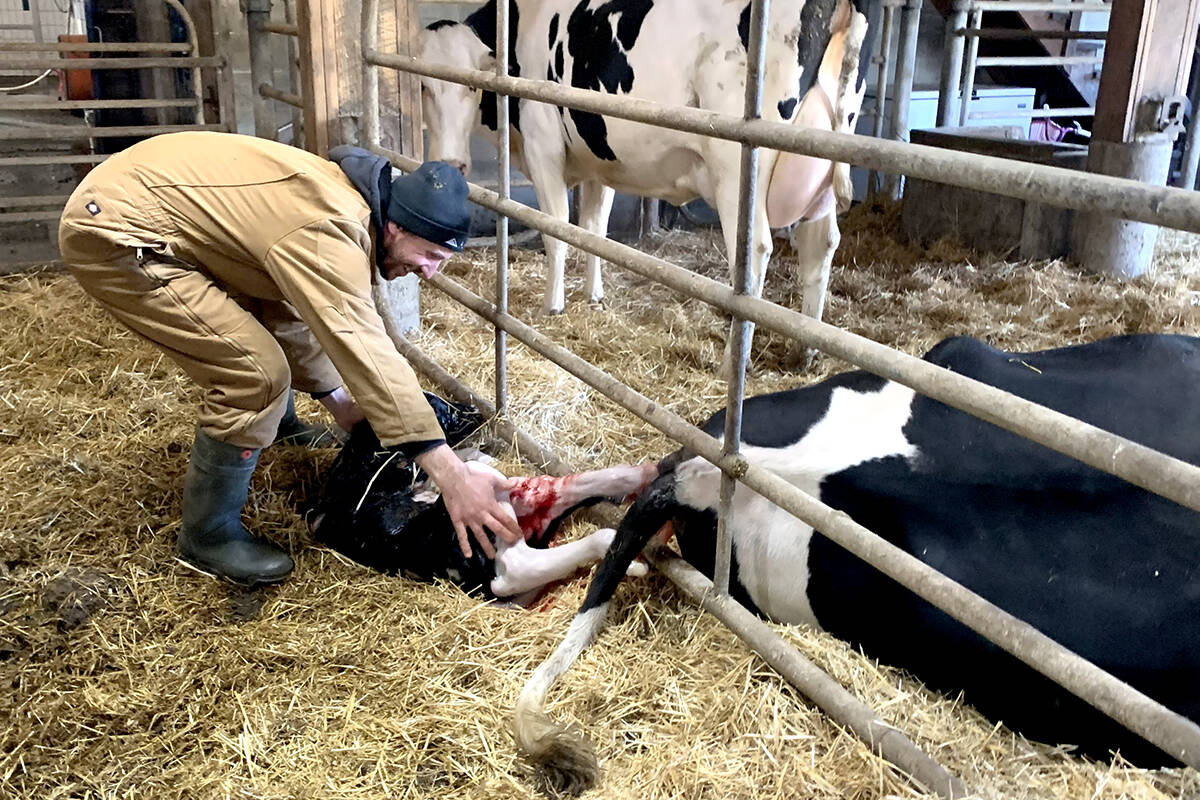 One of the dairy cows that was rescued during the flooding of Abbotsford’s Sumas Prairie birthed her own calf on Nov. 8, 2022 at Phillip Graham’s dairy farm. (Jessica Peters/Abbotsford News) 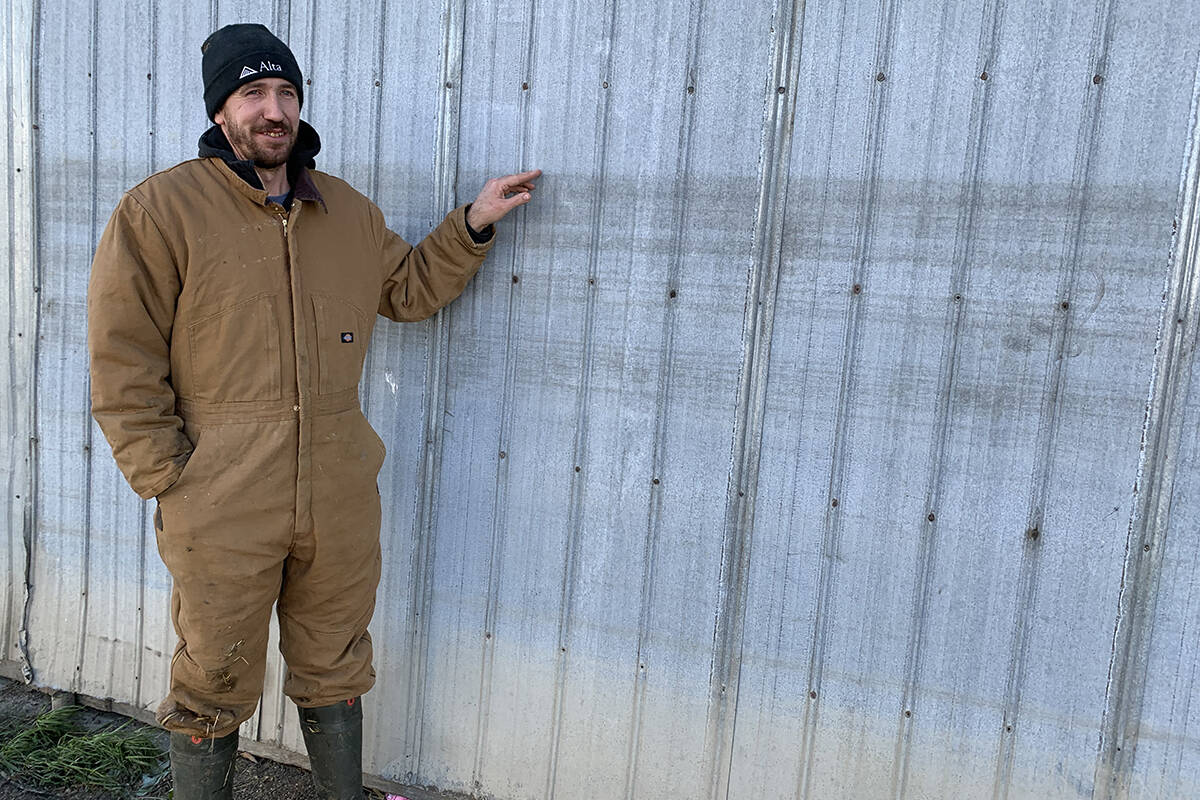 Phillip Graham shows the water marks on an outbuilding at his Sumas Prairie dairy farm, one year after the flooding that affected more than 1000 Abbotsford farms and households. (Jessica Peters/Abbotsford News) 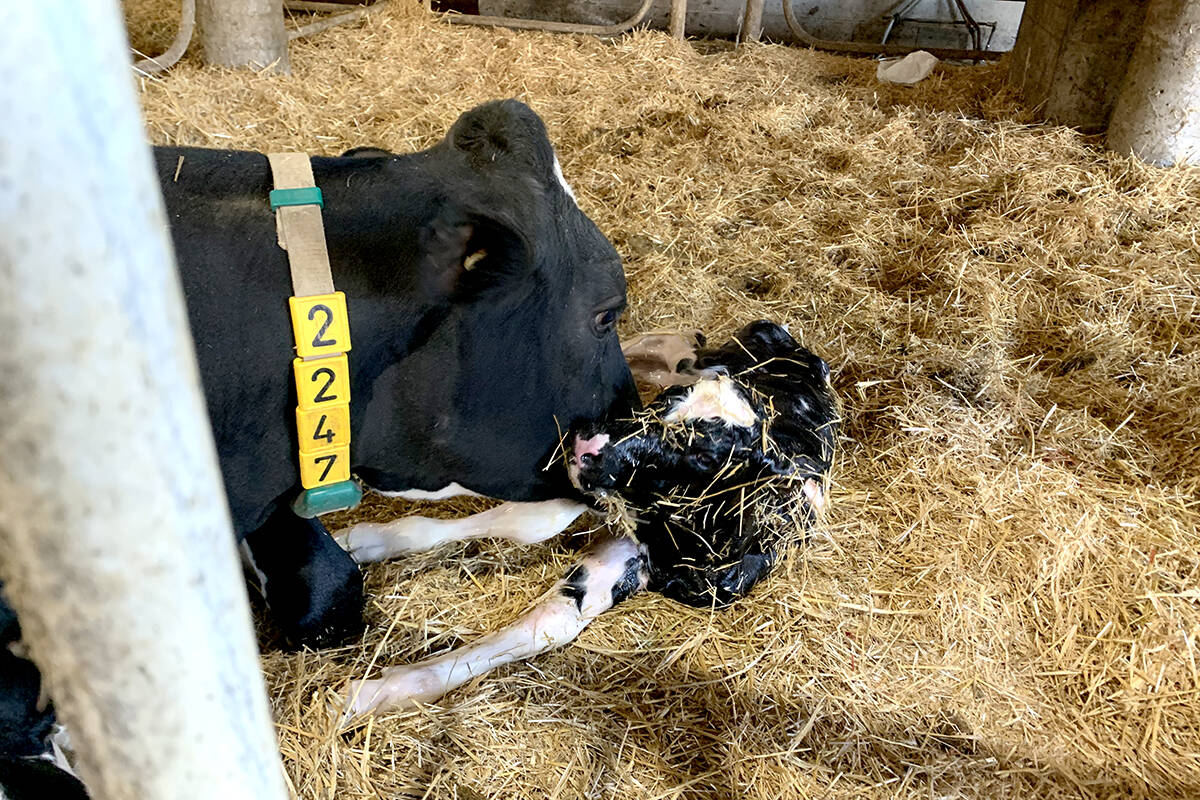 A dairy cow that was rescued from the flooding in November 2021 tends to her brand new calf at Phillip Graham’s dairy farm in Abbotsford, on Nov. 8. (Jessica Peters/Abbotsford News) 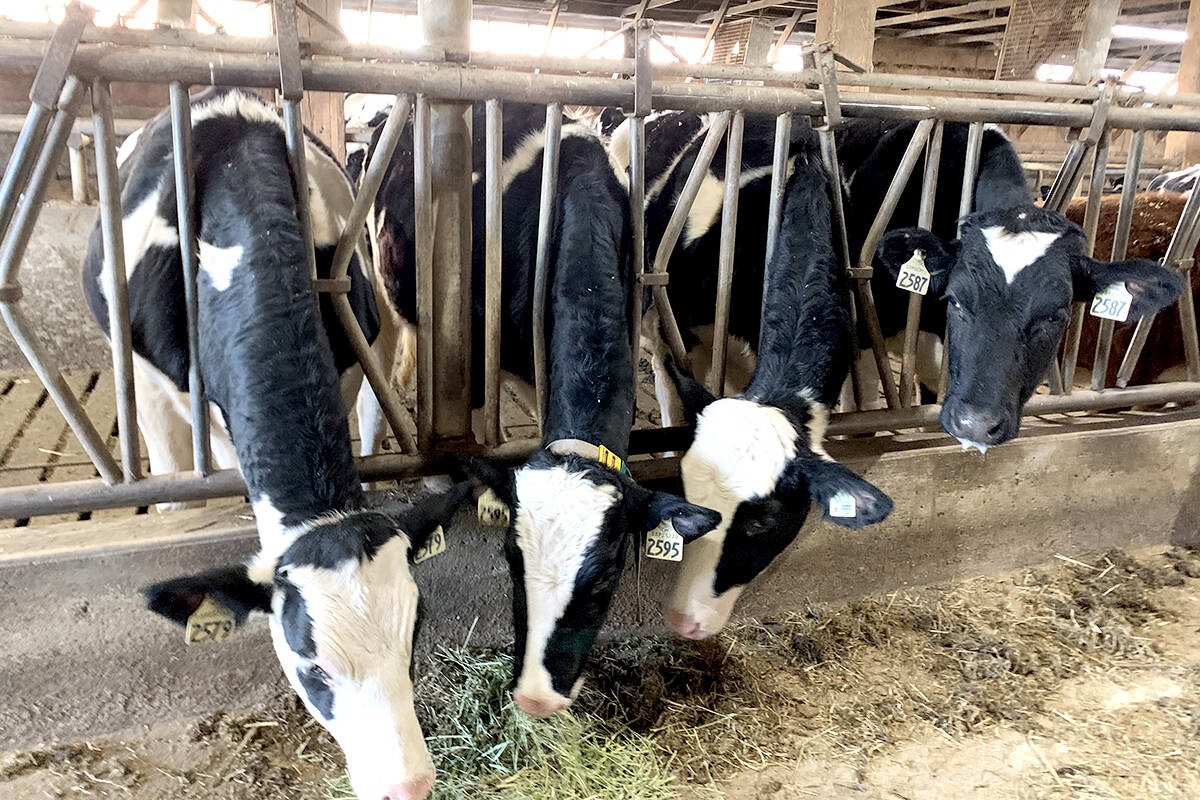 A few of the cows who were transported by boat from the heifer barn to safety after a dike breach near Phillip Graham’s dairy farm in Abbotsford. (Jessica Peters/Abbotsford News) 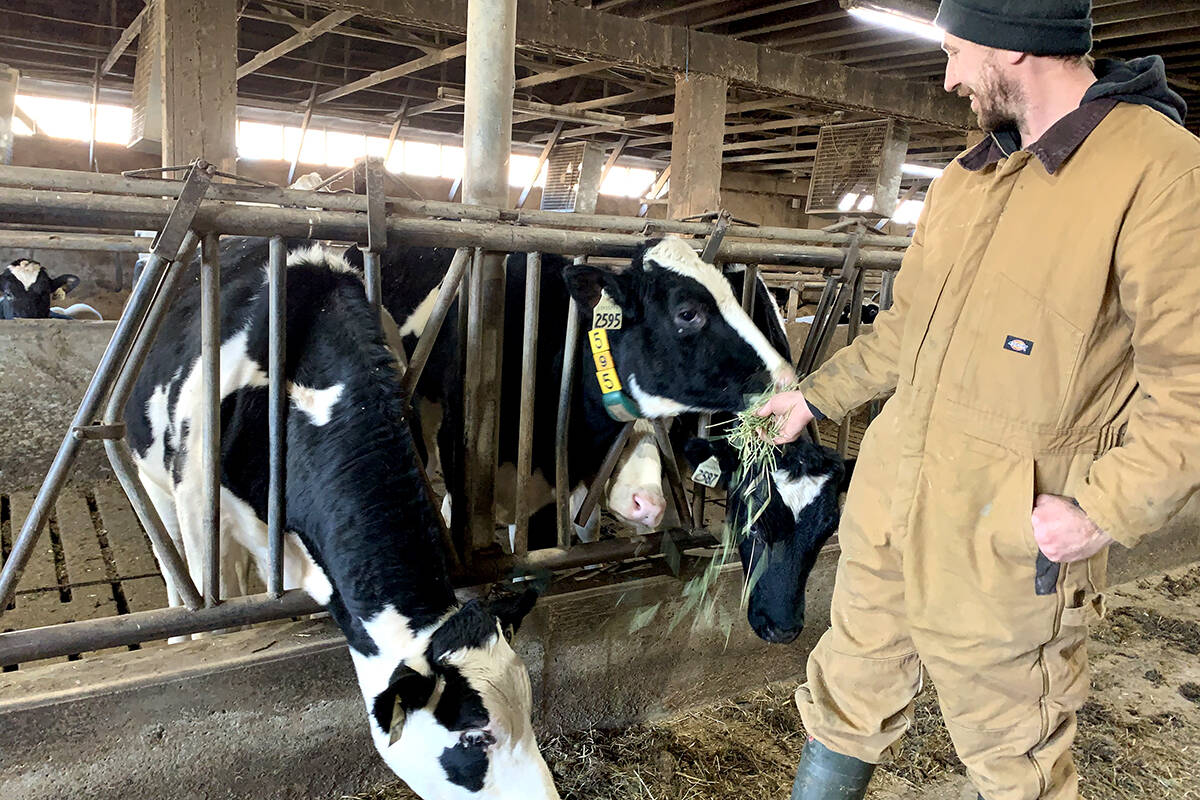 Phillip Graham spends a minute with some of the heifers at his dairy barn who were just brand new calves during the flood and were rescued by boat and taken to Chilliwack farms. (Jessica Peters/Abbotsford News)

Phillip Graham recalls wanting to “save everything” on his Sumas Prairie dairy farm in the days before it flooded.

But when the main dike breached within a stone’s throw of his land, he saw a wave of water coming toward him. He had already moved 240 cows from his 500-plus herd at that point and, in that moment, he knew choices needed to be made quickly.

He, along with one worker and a couple who had become stranded, moved the calves to the heifer barn, which is on a bit higher ground. Water had been filling up under the barn, and it would eventually be filled with several feet of water – he shows the water marks along the side of a barn, and the top line is near his shoulder.

Thankfully, by the Thursday of the floods (Nov. 18), they were able to get a small jet boat to the farm and start rescuing the calves. Just a few at a time were moved to a trailer on a road, where they were trucked to farms in Chilliwack with open arms. Volunteers and veterinarians were ready with warm towels and hair dryers.

“When they left, they were a few weeks old,” he said. “They were really small.”

Some of them almost didn’t make it.

But one year later, those rescued cows are birthing a new generation of calves. On a blustery cold November morning, in the safe cover of the heifer barn, an interview with Phillips about flood recovery was interrupted by a very familiar farm sound.

Just a few feet away, one of the rescued cows was calmly, quickly birthing a calf of her own.

Graham hopped into action and helped pull out the calf and drag it to its mom’s head, where she quickly began bathing it. They don’t always need help, Graham explained, but this one was born up against a stall door so he wanted to give them a hand.

The birth was over in just a minute or two and the farmer quickly checked over the calf.

The birth of a calf is always a special moment at a farm, but these dairy cows have already been through so much that it’s hard not to see the miracle.

Graham wasn’t alone that day. Farmers across the Sumas Prairie were moving hell and high water to get their animals to safety, using every method possible despite worried warnings from officials like the RCMP and the BC SPCA.

At the peak of the flooding, more than 1,100 farms were under evacuation order or alert, and 150 square kilometres of farmland was swamped. More than 6,000 dairy cows were temporarily moved to different farms to keep them safe.

Outside Graham’s heifer barn on Nov. 8, 2022, a winter wind was whipping over the prairie and the sun was shining. But on rainy days, Graham and other farmers are taken back to the days of flooding: the preparation and worry, the constant monitoring of the dikes and Sumas River, the instant floodwater when the dike breached, and the weeks of cleanup that followed.

It took a month to get the farm cleaned up enough to bring the Graham dairy herd home again and even longer to get the Grahams home.

And while the Disaster Financial Assistance program has yet to work out for Graham, like others, he said it was the initial outpouring of volunteer help that really got them on the road to recovery.

If he had to list them all it would take pages, he said, but he notes that local churches were extremely helpful, along with a large group of about 50 hunters and a group of students from Yale secondary.

At one point, there were about 100 volunteers on his farm, and he watched in awe as they shoveled mud and fixed things quickly and efficiently.

He and his neighbours do worry about where the next breach site could be, the next time a big rain fills the dike system or if the Sumas River swells to high levels again.

“We found the weakest link,” he said. “But it’s the rest that worries me.”

Lana Popham, minister of agriculture, toured some of the area’s farms on Nov. 8. She told media that most dairy and poultry farmers are now operating “back to normal” and the majority of annual field crops were planted as usual, but the sector is still “keeping its fingers crossed” for better weather this year.

In the meantime, life goes on at the Graham dairy farm, new calves and all.

For more, see The Abbotsford News’ special section Stronger Together. The Flood: One Year Later.