The second pro-inclusivity rally of this school year proved a learning opportunity for proponents and opponents Tuesday evening.

A group of people were in front of the Langley School District board office prior to the Tuesday evening board meeting to make a public display of their support for inclusivity and support of the Sexual Orientation and Gender Identity 123 (SOGI) resource in local public schools.

The issue was on the meeting agenda but in the form of identical letters from anti-SOGI advocates Kari Simpson and Theresa Carnduff of Culture Guard Canada. School board chairman Rob McFarlane said the board has decided that people wanting to voice opinions on SOGI can make written submissions to the district but not have time at the board meetings.

“This is both unlawful and discriminatory,” the letters said of the board’s decision.

The two said they would instead post their submissions on the internet.

A handful of SOGI opponents with signs set up on the corner on the east side of 222nd Street, some in Soldiers of Odin (SoO) shirts.

Mom Rachael Wagner and her family were at the rally even though they live in Surrey where they say the school and teachers for their five-year-old have been very accepting of his gender explorations.

He wears dresses about half the time “so it’s important to me that he’s included,” she said.

The mother of three supports SOGI because she believes children should grow up supported if they do not fit into traditional gender definitions.

“I’m tired of being quiet about my beliefs,” Wagner said.

Teacher Angela Cowling and Austin Lee are the Gay/Straight Alliance teachers at H.D. Stafford Middle School and attended the rally to support local young people because there are serious implications for young people struggling with these issues.

“What SOGI is, in the grand scheme of things, is an anti-suicide program,” she said in discussions with some of the anti SOGI people at the rally.

The Langley Advance asked some in the anti-SOGI group if any of them had children in the local district and would be willing to talk about the issues. A man and woman said they would but would not identify themselves over concerns about being attacked for being against SOGI.

Cody Greffard has two children in the Surrey school district but wanted to come to the Langley rally to voice his opinion on SOGI.

He’s not a full member of Soldiers of Odin Delta chapter, but has been with the group for more than four months. He says it’s not affiliated with the original right-wing SoO founded in Finland.

For him, the issues were the lack of public say on SOGI and parental rights to teach their children about inclusivity and tolerance.

“It should be voted on,” he said. “Even if it’s sometimes the wrong decision, it should be based on the majority.”

He and some of the others SOGI opponents spent time talking with the pro-SOGI members.

“It’s about the rights of the parents,” he told the Advance.

He disagrees with sexual orientation and gender identity issues being raised as early as kindergarten.

“I think sexual education should probably be in the later grades,” he said.

The Langley RCMP were on scene asking both sides to stand on grass medians and not the sidewalks. 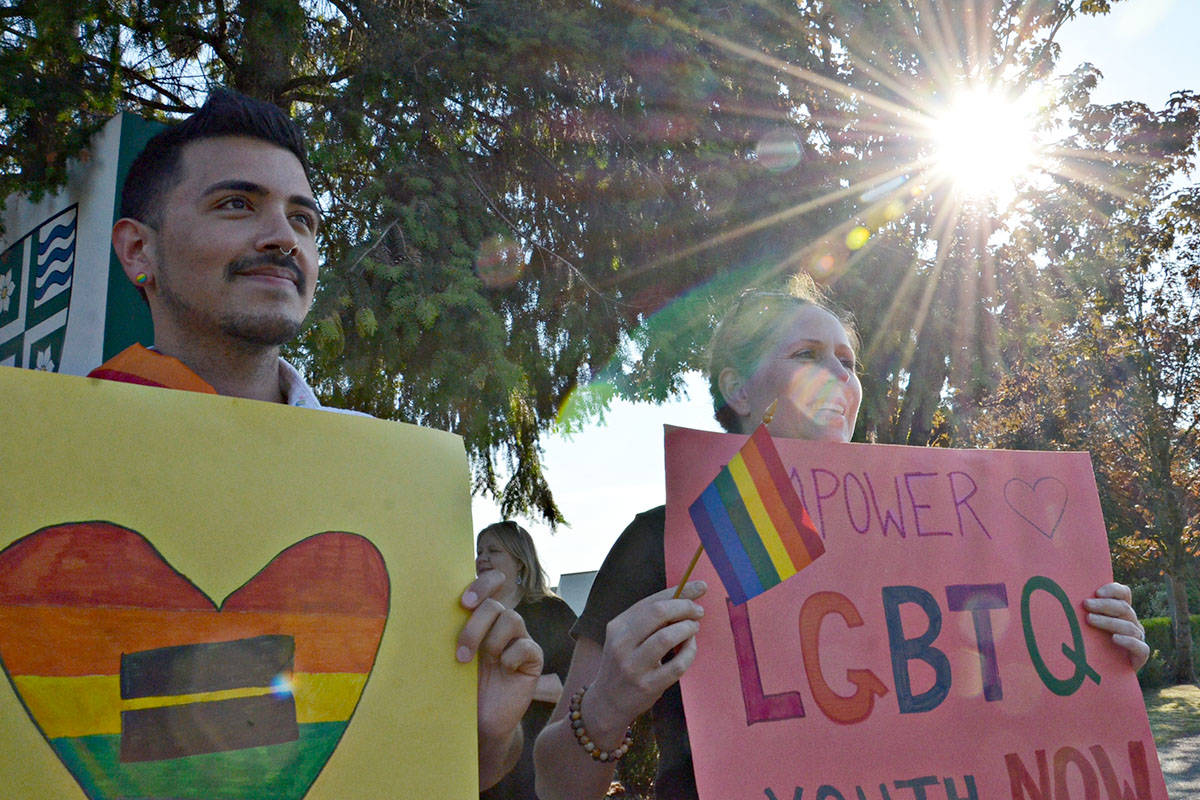 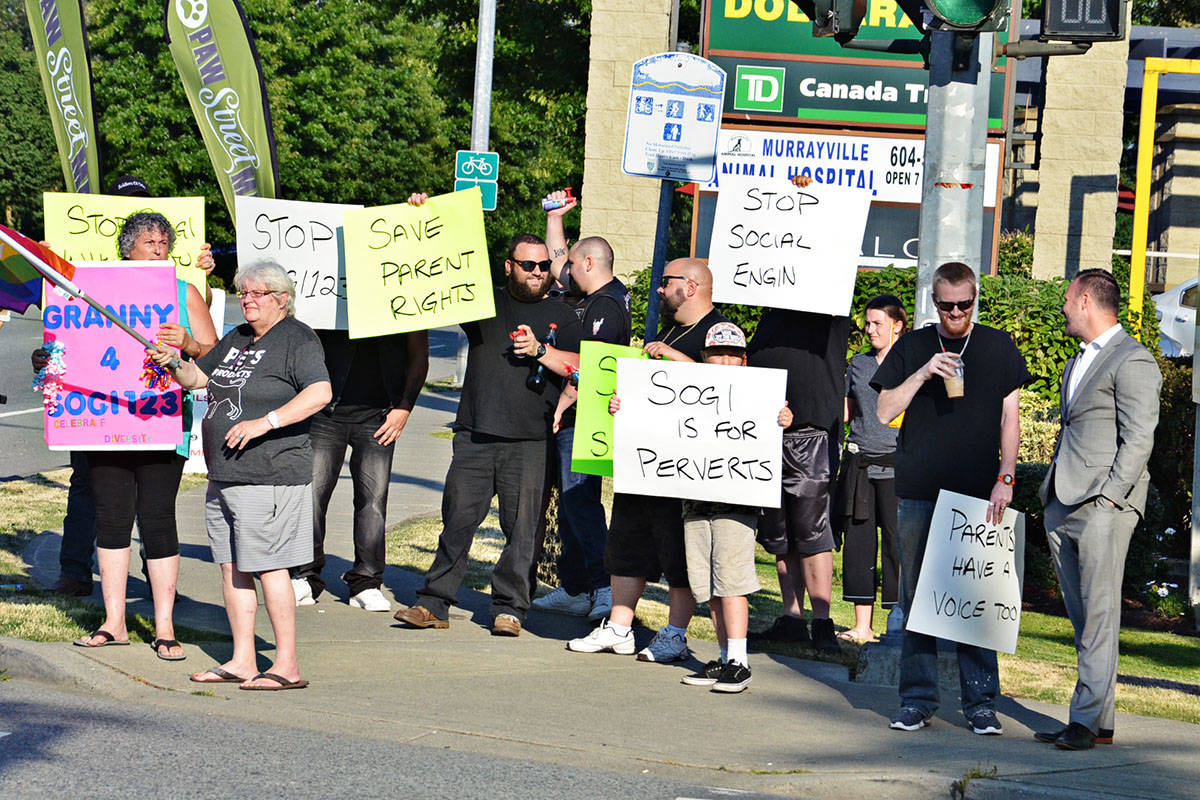 People for and against SOGI 123 met on the street corners near the Langley School District office before the monthly board meeting where the issue was expected to be on the agenda. (Heather Colpitts/Langley Advance) 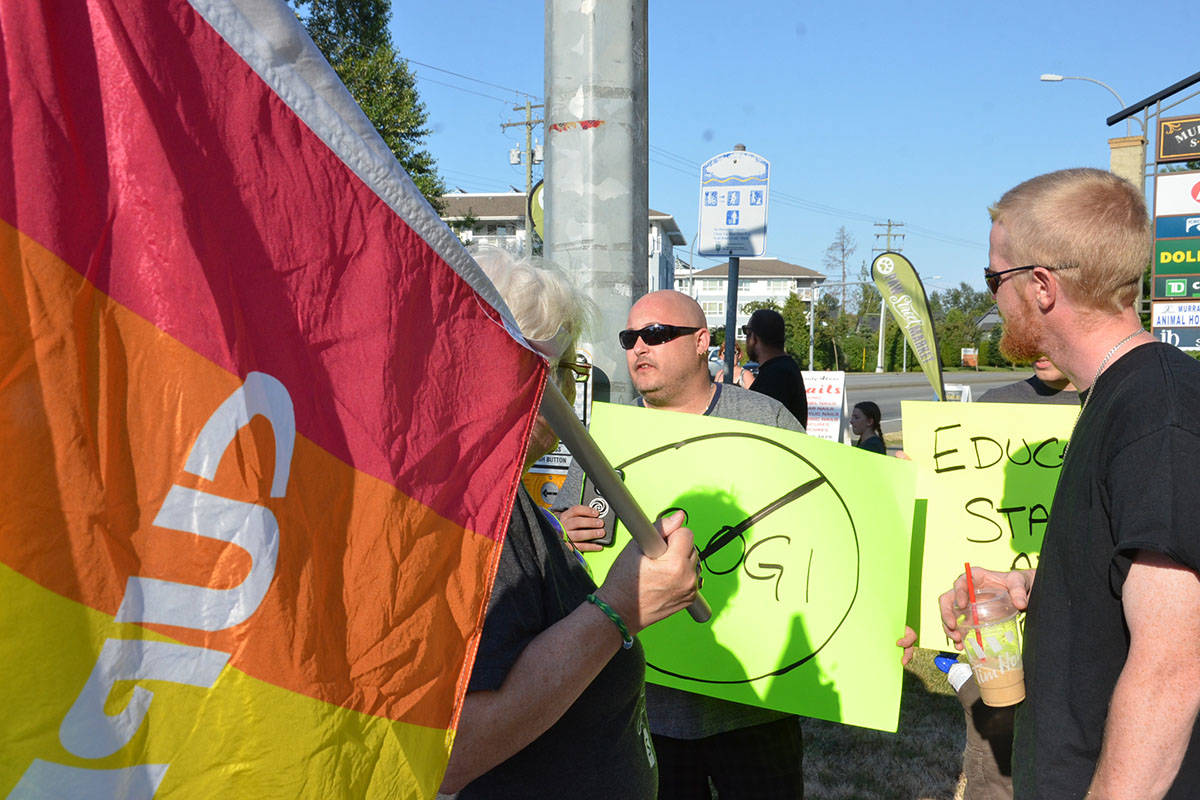 Dave Jensen and Cody Greffard say they oppose SOGI because it infringes on parents rights and was brought in with no public input. They spend time talking to pro-SOGI people at the rally before Tuesday’s school board meeting. (Heather Colpitts/Langley Advance) 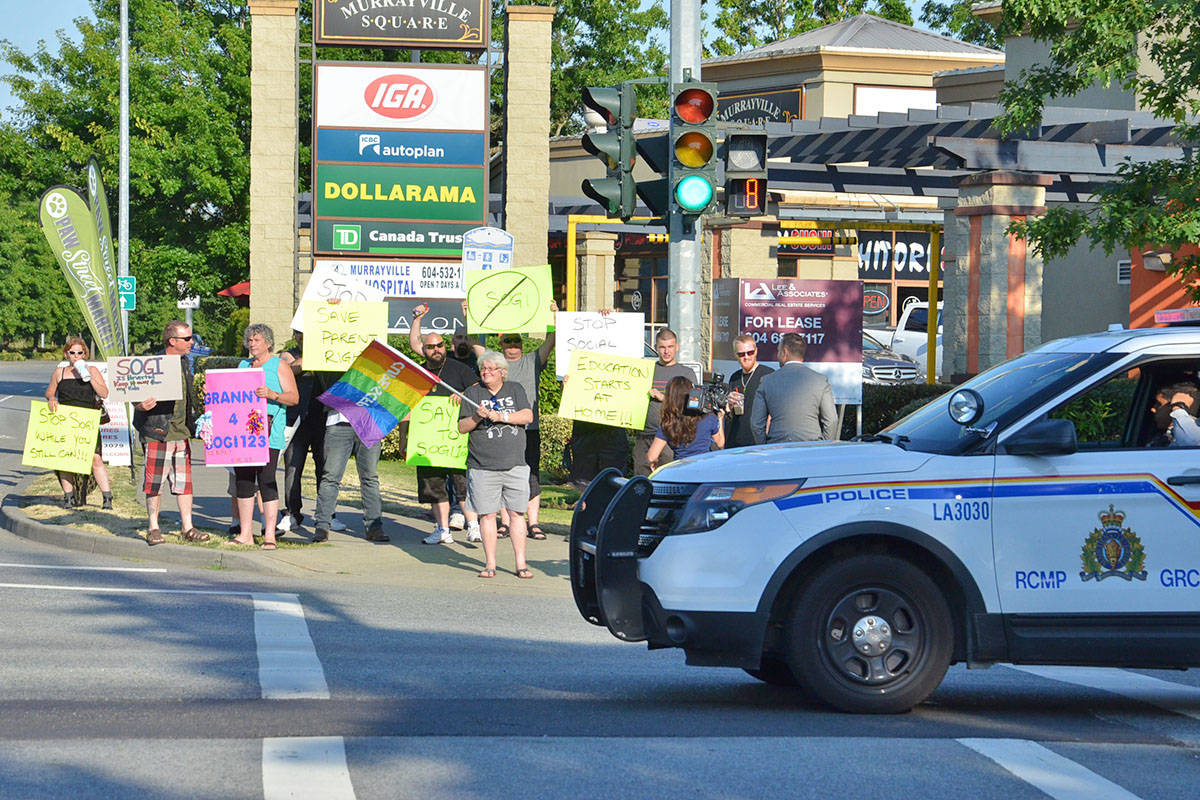 Members of the RCMP were on hand. They asked both sides to keep the sidewalks clear for the public at the peaceful demonstrations. (Heather Colpitts/Langley Advance)

Fake attempted abduction not funny to residents of Langley neighbourhood