With the colours of the rainbow displayed in their clothing and on placards — dozens of parents, grandparents, teachers, community members and young people rallied outside the Langley School District office to show their support for LGBTQ youth.

With signs reading, ‘#Love Wins’ and “Love is every colour in the rainbow,” the rally is intended to support inclusive education, which includes the new SOGI (Sexual Orientation and Gender Identity) curriculum mandated across B.C.

With more than 100 people turning out with flags and signs, the crowd was greeted most of the rally with honks from passing vehicles along Fraser Highway, including a loud honk of support from Township firefighters in their fire truck.

Langley parent and rally organizer Stacey Wakelin put the event together to show Langley’s LGBTQ youth that the community supports and loves them and is willing to fight for their right to be safe in their own schools.

“It’s an important day because we will be standing up in support of our school district, educators, students and families … Other groups would like you to believe we are the minority and that is not true,” said Wakelin before the rally.

Wakelin created the Facebook group Langley Parents For Inclusivity, which now has almost 700 members. She is scheduled to appear as a delegation at the school board meeting which starts at 7 p.m. on Tuesday.

She is followed by Langley student Mac Dykeman, who is presenting to trustees, “Why SOGI matters.”

Parents have been vocal on both sides of the new SOGI curriculum.

The group is concerned that some people have been spreading misleading and harmful information about a policy that aims to help all students feel safe and accepted.

Langley resident Kari Simpson, one of the founders of a conservative group called Culture Guard has been outspoken against SOGI education and wants to see it abolished from the school curriculum. In a letter to the Times, Simpson equated the SOGI curriculum to ‘child abuse.’

President of the Vancouver chapter of PFLAG (Parents, Family, and Friends of LGBTQ people) Colin McKenna was planning to attend the rally and shared his response to Simpson’s views. McKenna attended Simonds Elementary and then Aldergrove Secondary in the 1980s.

It was a time when homosexuality was not discussed in schools.

“There were those in society that would speak out about the ‘evils’ of LGBTQ people, particularly during the height of the AIDS crisis. We were told we were mentally ill; we were told were were unwelcome in most religious circles; we were told that we were unnatural, a danger to children.”

In this letter to Langley trustees, McKenna asked the board to “resist the voices of hate in the community that seek to put people like me back in the closet, stand strong for the transgender children who are at significantly high risk of suicide,” McKenna writes.

McKenna is the boy in the yellow shirt on the left that has his name on it. McKenna said Ms. Dixon was a champion to him because she let him be him. 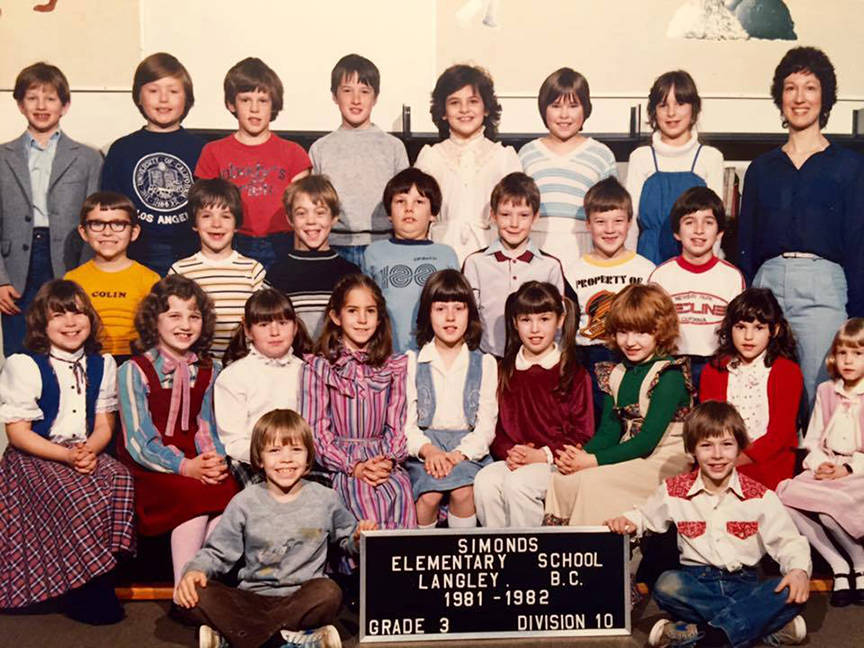 Dozens of people demonstrated outside the Langley School District offices to show support for LGBTQ youth. Dan Ferguson Langley Times This is Colin McKenna’s Grade 3 class photo. He is on the left in the yellow shirt that reads ‘Colin.’ He was teased for wearing that shirt but he called his teacher Joan Dixon a ‘champion’ for letting him be him. He is now the president of PFLAG, Parents, Families Friends of LGBTQ people. He has written a letter to Langley school board urging them to stay the course with SOGI curriculum. Submitted photo

HPV vaccine to be made available to Grade 6 boys in B.C.