Lauren Andersen was lugging a wreath that was almost as tall as she is Saturday morning.

As the seven-year-old walked past a long row of flags that lined the two driveways leading to the cenotaph at the Murrayville cemetery at 21405 44 Ave., her mother explained the family has been coming there on Remembrance Day for the last four years, to quietly celebrate the memory of Canada fallen soldiers.

This year, they had a lot more company.

A crowd of more than 300 people attended the very first formal Remembrance Day ceremony at the Murrayville cemetery.

The cenotaph, which was restored by the Township of Langley earlier this year, is a twin to the Fort Langley monument.

Both were erected in 1921 to honour local soldiers who lost their lives in the First World World, and have since been dedicated to soldiers from the Second World War as well.

The concrete pedestal stairs that made up the Murrayville cenotaph base, supported the granite structure, and served as a place where people can lay commemorative wreaths, was crumbling, cracking, and breaking off at the corners.

The Township applied for a federal grant from Veterans Affairs Canada through their Commemorative Partnership Program to replicate and replace the base.

A specialized company that has extensive skill and experience working with monuments shored up and braced the cenotaph with plywood, removed the old base and poured new concrete stairs poured all the way around.

The project was completed at the end of July.

The master of ceremonies at the Murrayville event, Rosemary Genberg, was delighted by the turnout.

“I want to thank you all for coming.”

Genberg has also attended the cenotaph in the past for informal Remembrance Day gatherings.

She has a personal connection to the monument as her grandfather, who fought in the First World War, is buried in the Murrayville Cemetery.

“This is the first formal Remembrance Day ceremony held here (at) the Murrayville cenotaph since it was erected in 1921,” Genberg said.

“A few community residents and friends have decided to organize a simple but hopefully meaningful ceremony,” she said, adding they hope to make it an annual event.

More than 240 flags lined the walkways through the cemetery to the cenotaph.

Fred Dalkeith read his poem “The Parade Ground Beneath Our Feet” which reads, in part:

The event also took a moment to express sympathy for the family, friends and fellow officers of Abbotsford Const. John Davidson, who was killed in the line of duty on Monday.

Despite the threatening grey clouds, the rain held off until the end, with a few drops beginning to spatter people as they left the cemetery.

“The timing was perfect,” one woman said.

The Murrayville event was one of four Remembrance Day services in the Langleys.

At the Fort Langley Cemetery, at 23105 St. Andrews Ave. there was a parade, led by a piper and colour party.

The parade made its way toward the cenotaph through the cemetery, passing by the graves of nearly 300 veterans who are buried there.

Master of Ceremonies Andy Schildhorn listed the names of six young men from Langley who fell in the battle of Passchendaele on the 100th anniversary of the end of the battle, saying “their names are inscribed on the (Fort Langley) cenotaph, and they are very much on our minds today.”

Schildhorn also referred to the fallen Abbotsford officer, saying “we also honour constable John Davidson, who gave his life in the service of our community.”

“As year follows years, we assemble here to honour those heroic men and women who made the supreme sacrifice to ensure that we, who survive, and generations to come, might live in peace and be free to pursue, within the bounds of decency, law and order, a way of life each one of us may choose,” he said.

“Many others have died since their active day of service to their country, and today we remember and honour them too.”

In his prayer, Rev. Fred Fulford gave “thanks for all those who bravely went into battle (and) faced death that we might enjoy freedom and peace.”

“Be with those who are now waging war against terrorism and injustice in the world,” he said.

RCMP Constable Nicola Park, read the prayer “For the fallen” by Lawrence Binyon, which famously states “they shall grow not old, as we that are left grow old. Age shall not weary them, nor the years condemn. At the going down of the sun, and in the morning. we will remember them.”

In Langley City, at the Douglas Park cenotaph, at 20399 Douglas Cres., the annual ceremony began with a procession led by the air cadets pipe band, veterans, armed forces, first responders, and members of the Brownies, Guides and Scouts groups.

In Aldergrove , at the Aldergrove Legion at 26607 Fraser Highway, there was a parade from Old Yale Road at 268 Street, down Fraser Highway to the Legion. The ceremony included hymns, poems, messages, laying of wreaths and a flypast by the Fraser Blues. Immediately after the ceremony. 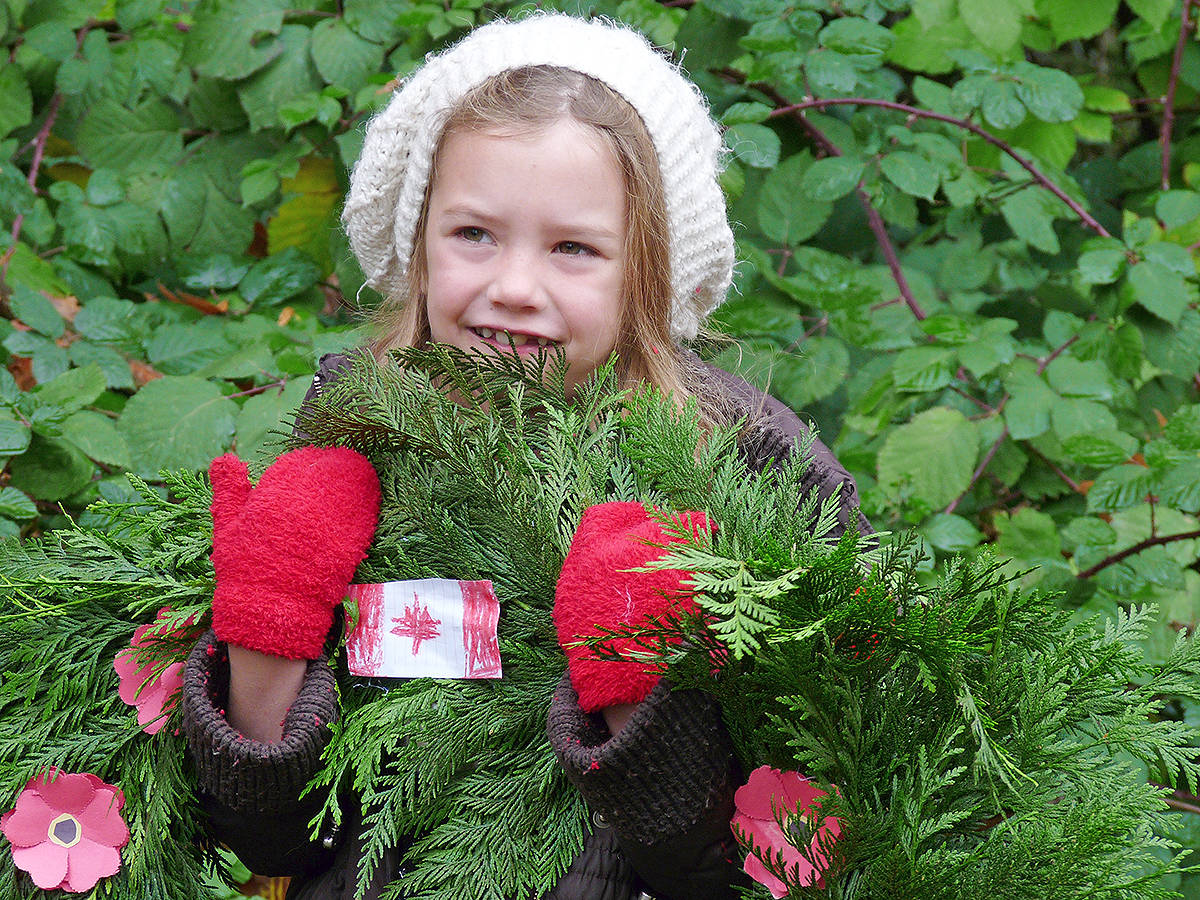 Lauren Anderson, 7, carried a wreath that was almost as tall as her to the Murrayville Remembrance Day ceremony. It was the fourth year she and her family have attended the cenotaph. Dan Ferguson Langley Times 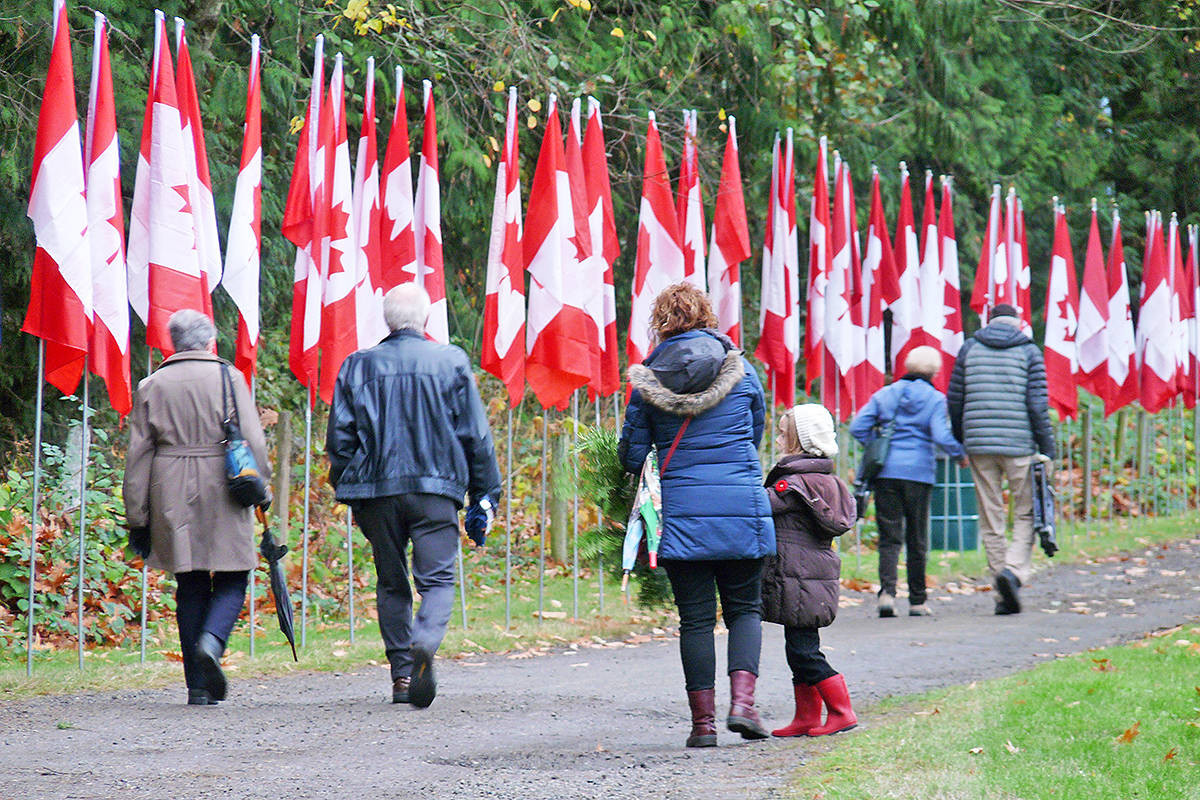 More than 240 flags lined the driveways that lead to the Murrayville cenotaph. Dan Ferguson Langley Times 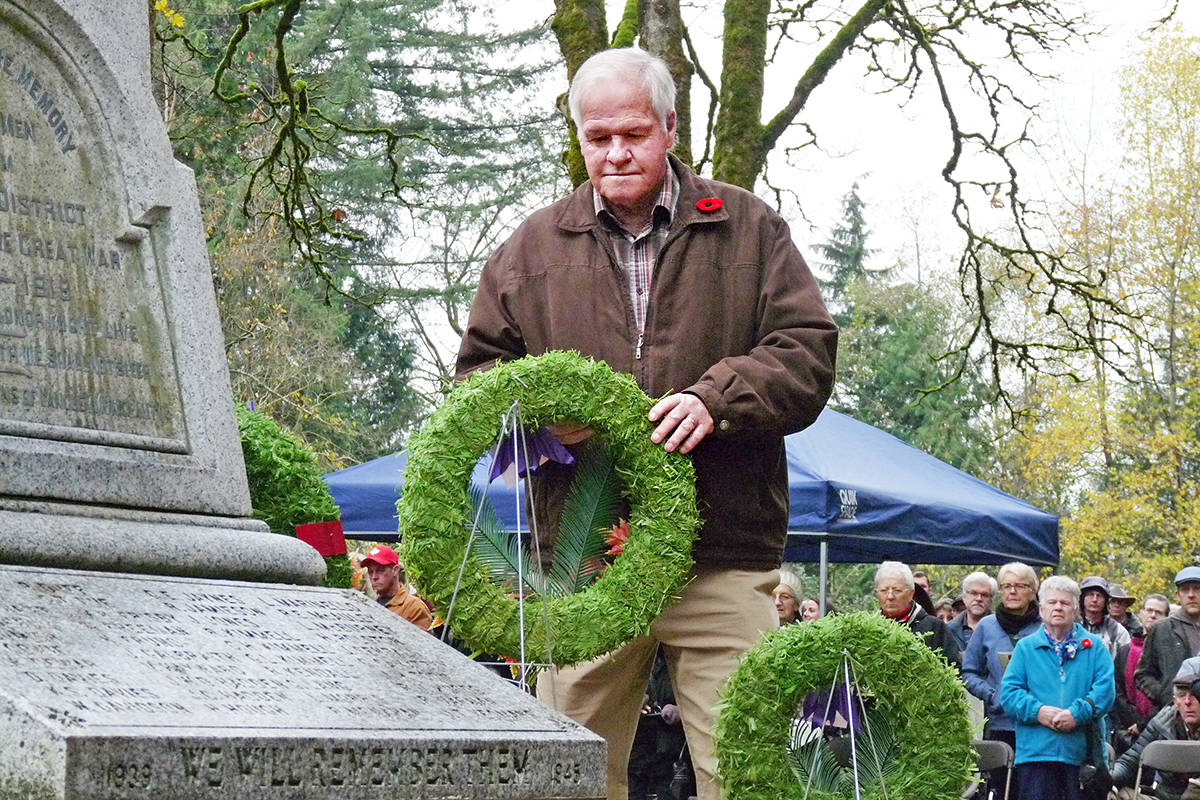 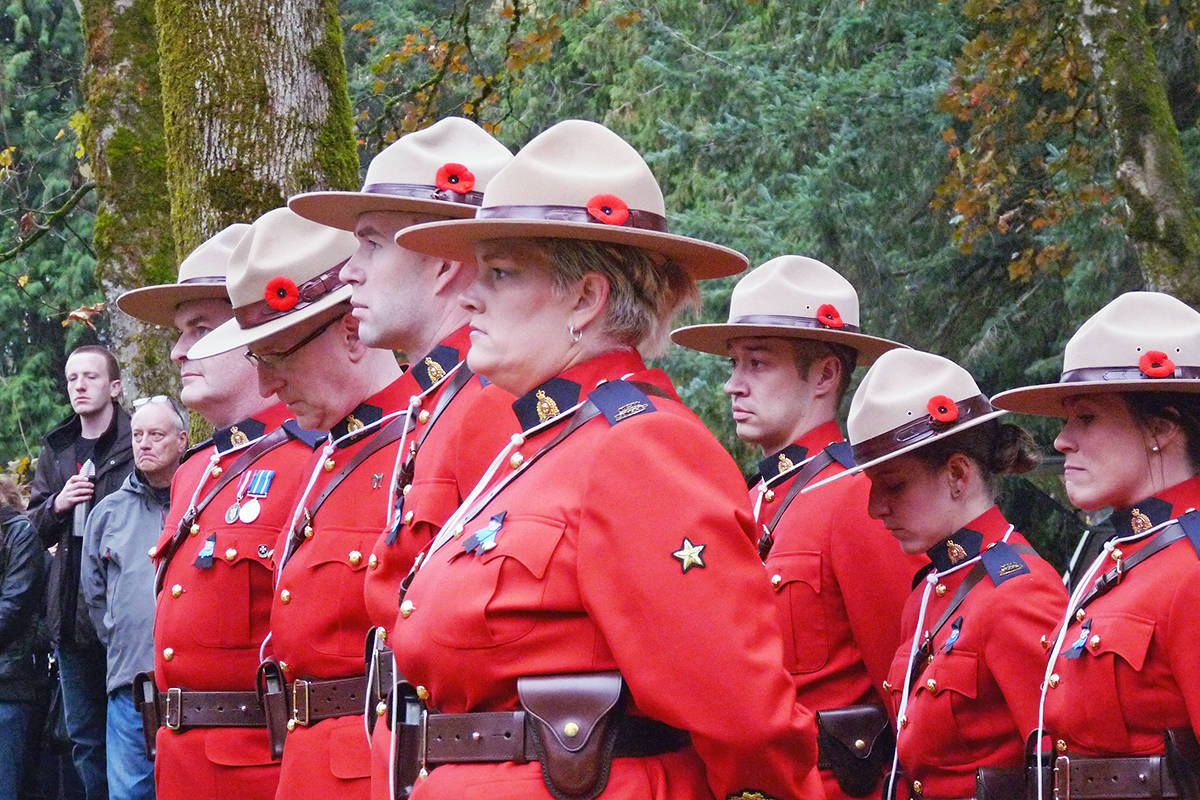 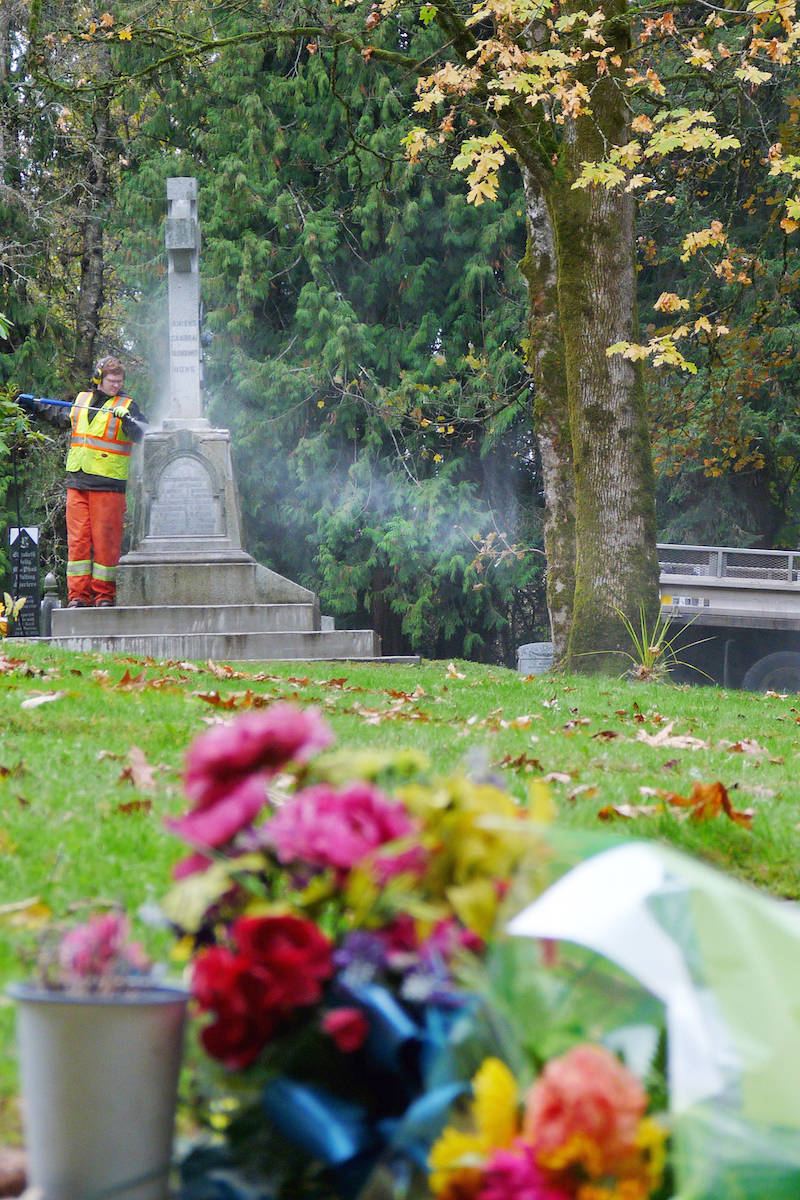 A Township of Langley employee cleans the cenotaph at the Murrayville cemetery in advance of Remembrance Day. Dan Ferguson Langley Times