A walk in Golden Ears Provincial Park in Maple Ridge on this past weekend turned into a very bad day for Dax, a five-month-old Lagotto Romagnolo dog from Langley, after he consumed some cannabis remnants.

Pet owners Valerie Ryan and Mathew Ryan had driven north from their home in Langley’s Willowbrook neighbourhood for an outing with their dog on Saturday, March 27.

They hiked as far as the camping area at Half Moon Beach on the East Canyon Trail when Dax suddenly became ill.

A type of dog originally bred to hunt for truffles, Dax was nosing around some rocks shortly before it happened.

“We noticed him starting to wobble,” Valerie told the Langley Advance Times.

On the way back, Dax began to have trouble walking.

“His legs were hardly holding him up,” Valerie recalled.

“He also started to become fearful of other dogs on the trail, which is not like him at all.”

They had to pick him up and carry him out, something Dax normally doesn’t like – another indicator that something was wrong.

His head kept wobbling on the drive home and after arriving, he wet himself.

“He’d go to scratch his head and fall over.”

It took seven to eight hours for him to stand up straight.

“If he had ingested more, it would have lasted way longer, so we got lucky,” Valerie said.

She personally knows of at least three other dogs that have taken sick from consuming cannabis discards, including Dax’s brother Ollie, whose owner had to rush him to the vet for an IV and overnight stay that cost $900.

One local vet told her they are seeing as many as two cases a night of dogs suffering toxic cannabis reactions.

In response, the freelance graphic designer has created a poster to raise awareness with cannabis consumers and dog owners.

“Here’s something to bark about,” it warns, and advises dog owners to beware of discarded cannabis roaches, joint butts, and edibles in public parks and on trails – warning that even “very small amounts of ingested cannabis can cause great harm to dogs.”

She is planning to have some printed and laminated versions run off to put up in walking trail parking lots.

“Please, please pick up or fully incinerate your roaches, even if you’re out in the woods,” Valerie urged.

As of Monday, Dax was back to normal.

“He is back to being a scoundrel,” a relieved Valerie reported.

“[I’ve] never been so happy about him pushing boundaries and trying to steal my breakfast.” 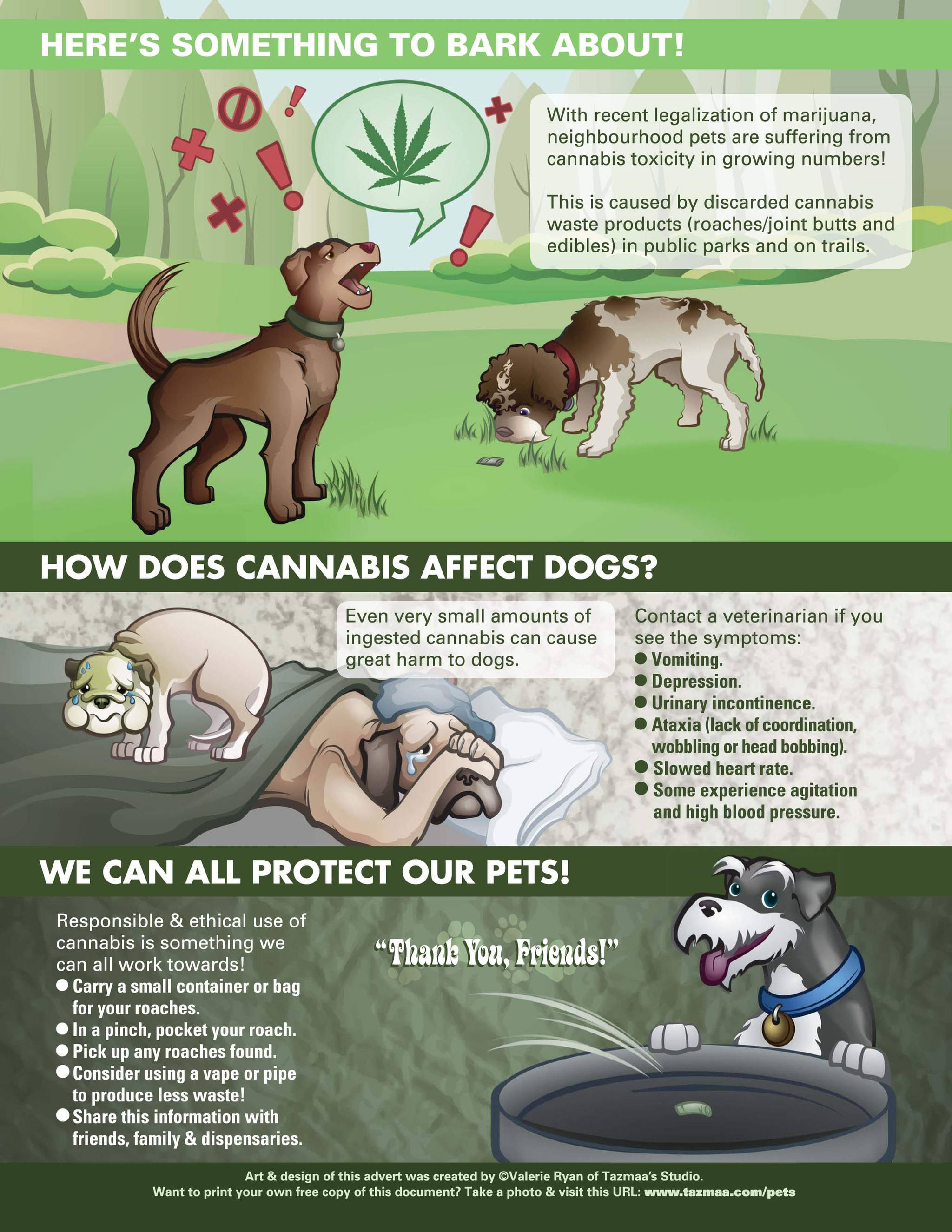