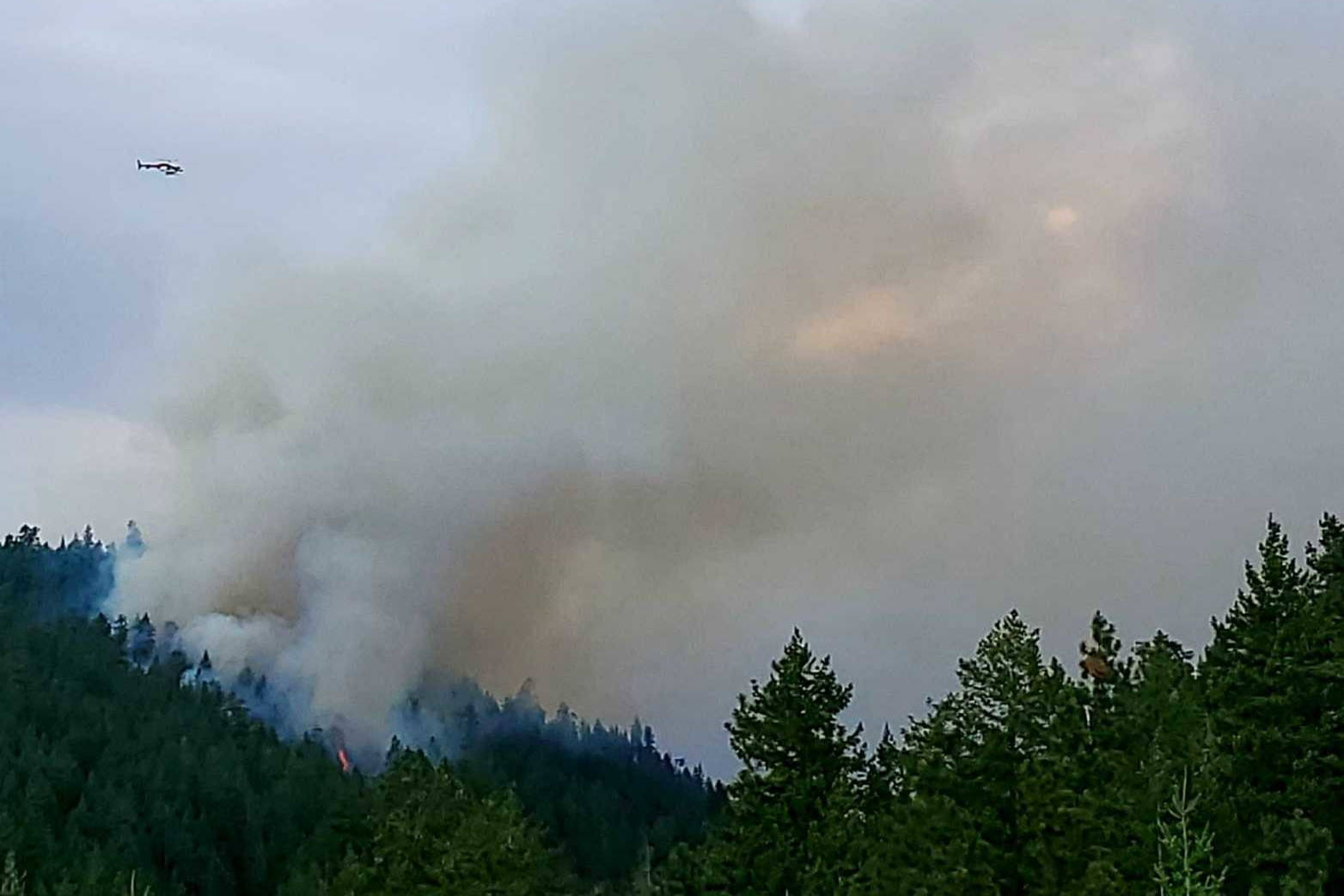 Smoke and a helicopter visible near Peachland on Sunday, Aug. 15. (Kerry Hutter photo) 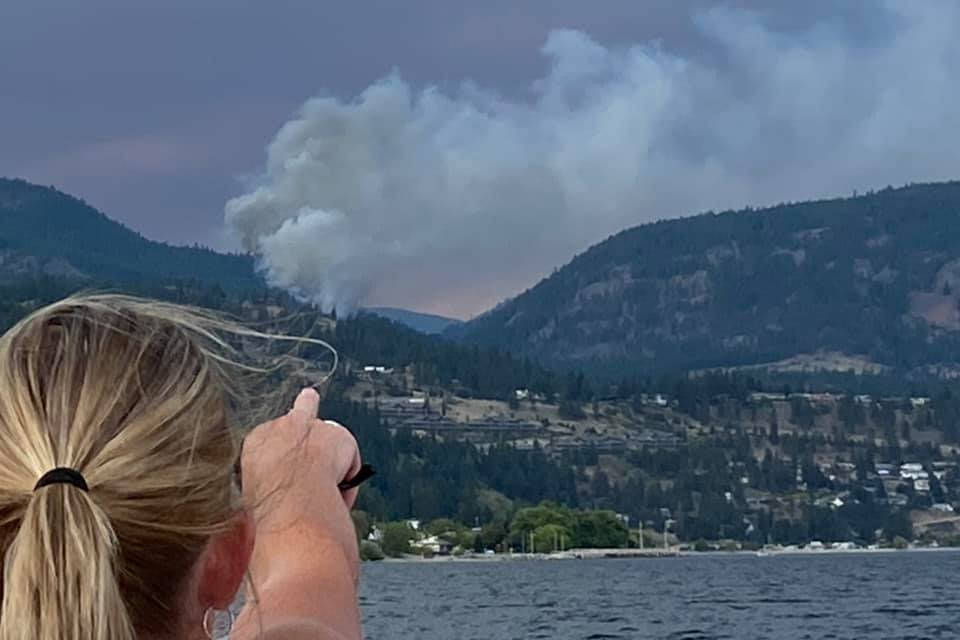 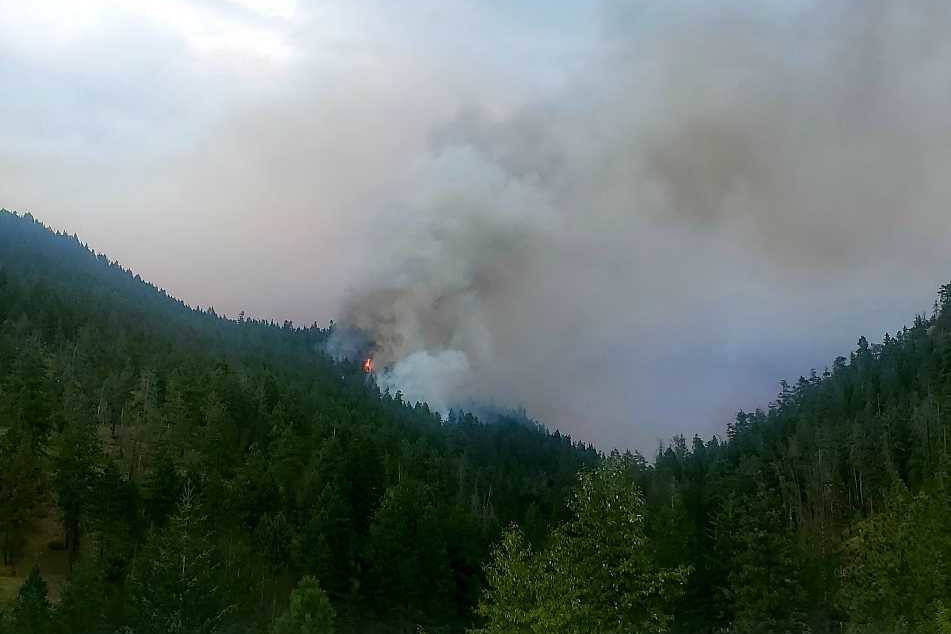 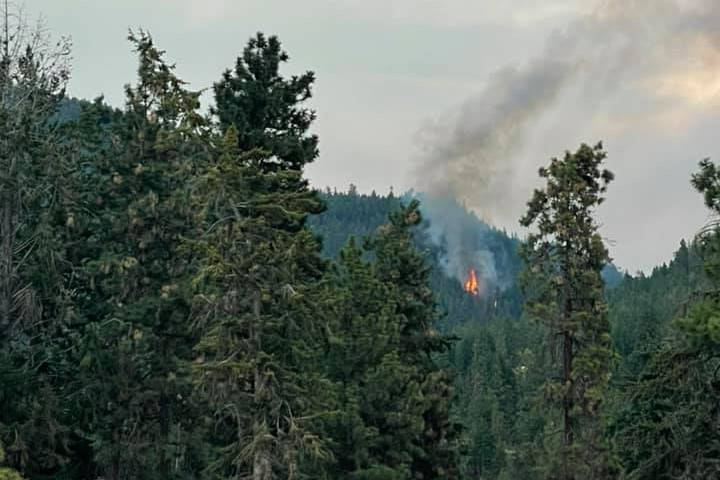 The Emergency Support Services reception centre for the Mount Law fire has been relocated to Mount Boucherie Secondary School at 2751 Cameron Road in West Kelowna.

The Mount Law wildfire, currently burning at an estimated 200 hectares near West Kelowna, is suspected to be human-caused, according to the BC Wildfire Service.

The blaze, threatening several homes in West Kelowna’s Glenrosa neighbourhood, has been declared a fire of note and is suspected to be human-caused.

Several homes in Glenrosa have been ordered evacuated and the entire neighbourhood is on evacuation alert.

The evacuation order has been expanded to include all properties east of Gates Road to Glenrosa Road.

Crews will remain on site overnight.

All of Glenrosa are under evacuation alert as the Mount Law wildfire continues to show aggressive behaviour.

Residents in the area are advised to be ready to leave their home at a moment’s notice and should be prepared to leave their home for an extended period of time. Make arrangements for pets and pack essential items such as documents and medication, said Central Okanagan Emergency Services.

An evacuation order has been issued for properties in the immediate area of the fire.

The Central Okanagan Emergency Operations Centre has been activated to support BC Wildfire Service crews fighting the fire. A state of local emergency has been declared for West Kelowna. Central Okanagan Search and Rescue is currently involved with the evacuation.

Properties on evacuation order are:

All residents under evacuation order should leave their properties immediately and register with Emergency Support Services (ESS). An ESS reception centre for evacuated residents specific to the wildfire has been set up at Jim Lind Arena located at 2760 Cameron Road, West Kelowna.

The wildfire near Peachland is now estimated to be eight hectares in size, said BC Wildfire Service.

Westbound lanes between Highway 97 and Brenda Mine Road have also been closed. Crews are on scene and Drive BC is urging motorists to expect delays.

The fire is just off the Okanagan Connector and heavy smoke and flames are visible in the area. There are currently 11 personnel, four helicopters, four skimmers, heavy equipment and a water tender. BC Wildfire Service, West Kelowna Fire Department and RCMP are currently at the scene.

Another wildfire has ignited on Sunday evening near Peachland.

The fire is just off the Okanagan Connector and heavy smoke and flames are visible in the area.

BC Wildfire Service information officer Charlene Mortensen said the fire was discovered around 5 p.m. and the West Kelowna Fire Department is on scene alongside wildfire crews.

Currently, a single helicopter is bucketing water to the blaze.

More information is expected to be released in the coming hours regarding the size of the blaze.

Do you have something to add to this story, or something else we should report on? Email: michael.rodriguez@kelownacapnews.com

In Our View: Truth comes before reconciliation