Incidents of wire theft are on the rise in Langley City, with 19 incidents reported so far this year.

There were six in the last six weeks alone at a variety of locations including sites along Fraser Highway and Salt Lane in the downtown core.

The thieves are are going after street lights and junction boxes, ripping out wires and causing expensive damage.

As of this week, the City has spent over $22,000 on wire-theft-related issues in 2018, almost double the amount budgeted, engineering operations manager Kyle Simpson said.

There are safety risks for both staff and the thieves, Simpson said.

“For the most part, staff have the ability to eliminate the risk by turning the power off at the location where they need to make repairs (but) the thieves don’t, and they run a high risk of being electrocuted.”

Residents are being encouraged to report any suspicious activity that they might come across, especially outside of standard business hours.

“If you see someone pulling wire from a street light or electrical junction box and they do not appear to be a City employee or contractor, please report the incident (to police)” Simpson said.

The City is switching from copper wires to aluminium wires, stamped “City of Langley” in a bid to discourage thefts.

The surge in wire theft comes after several years of relative peace.

The problem peaked in 2011, one of the worst years for wire theft, when the City spent over $180,000 on wire theft-related issues, a year when the municipality had budgeted $10,900 for repairs.

“After 2012 we started to see a steady decline in wire theft,” Simpson said.

“We were still dealing with some issues but nothing as significant as 2011.

Some analysts have suggested the increase is partly due to increased demand for copper created by the rising popularity of electric vehicles, which need four to five times more copper than gasoline-powered vehicles.

The Township of Langley has not seen a spike in wire theft.

One recorded incident since last December in the Township cost $608 to repair.

The Township has deployed a number of anti-theft design measures that make it harder for thieves to get at wires inside utility poles.

There has been a rash of incidents reported in other B.C. communities.

Earlier this month, RCMP arrested three people for causing approximately $100,000 worth of damage at the old Catalyst Paper mill near Campbell River while attempting to steal copper wire.

In January, Nanaimo RCMP were investigating thefts of approximately $100,000 worth of copper electrical wire.

Hydro spokesperson Karla Louwers called it “an extremely dangerous crime that not only exposes the perpetrators, but our employees, customers as well as the general public to significant risk.”

Louwers went on to say B.C. Hydro loses about $1 million due to metal theft annually.

“Each incident has the potential to create lengthy service delays and can incur replacement costs of several thousand dollars up to $50,000,” a joint statement said.

In January, a wire theft in the area of Blanca Street and West 7th Avenue in Vancouver left live trolley wires hanging low over a sidewalk.

The number of wire thefts plummeted in B.C. after the provincial government passed a anti-metal theft law in in 2012 that requires licenced metal dealers and recyclers to keep records of the type of metal they buy and to record the identities of the people they buy it from.

They must also report their purchases to police.

Sellers of certain types of metal have to show a driver’s licence or B.C. Identification Card.

In the first year after the law took effect, the number of wire thefts from BC Hydro dropped 46 per cent.

Telus reported a similar substantial and sustained drop, as did the Township and City.

All credited the new law, along with the adoption of anti-theft measures to make it harder for thieves.

The latest Langley City wire theft incidents have been reported to police. 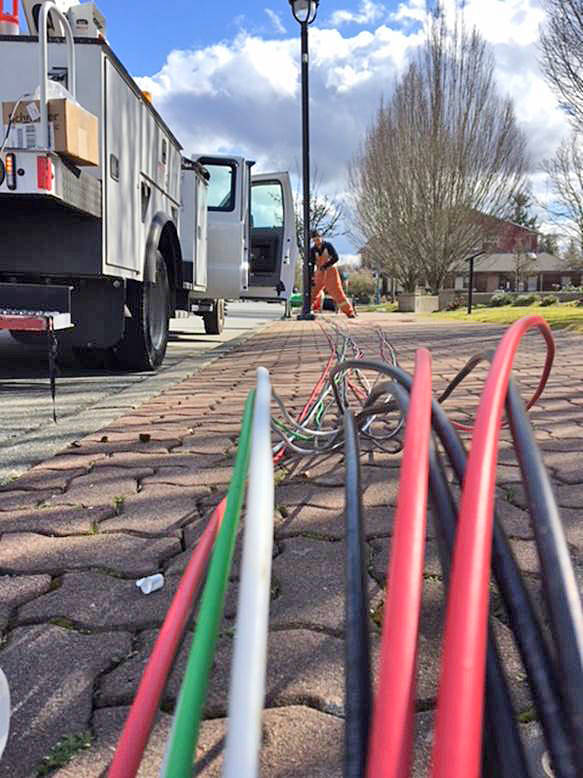 There has been a rash of wire thefts in the City in the last month and a half, possibly the result of rising copper prices. Photo by Cliff Empey 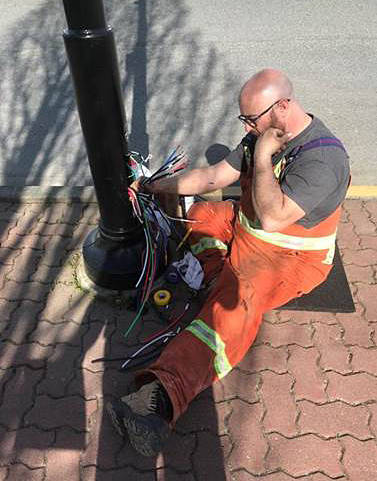 Free parking not in the cards for Fraser Valley hospitals