A memorial to one of three people who died at the scene of a suspicious Langley house fire described him as a much-liked co-worker.

According to a neighbour, a group of people from the man’s place of work, Rogers Sugar, left more than a dozen bouquets, along with tribute messages, and a photo, on the temporary fencing around the house in the 19600 block of Wakefield Drive, which was gutted by fire on Saturday, June 13.

Three people died and the fire is being investigated as a homicide.

“You will be very missed. R.I.P. Francesco. Your Rogers Sugar Family,” one message read.

A photograph surrounded by flowers showed a man with a dog.

“It was a pleasure meeting you and having the chance to work with you,” another message read.

“May you rest peacefully,” another message said.

“Thinking of you,” said another.

Hanging on the temporary fencing was a work shirt with the name “Francesco” embroidered along with the Rogers Sugar logo.

According to the article, Francesco was found outside the house, while the bodies of two women, one of them his partner, were found inside.

The couple had no children, the article said, but Francesco’s partner had a son from a previous relationship.

Earlier, one next-door neighbour had told the Langley Advance Times the residents of the house were two working parents and what she believed were two near-adult children.

The couple was described as friendly, tenants who took good care of their rented house.

A friend posted an online tribute in the form of a message that, translated, read “I would like to make you understand how much I loved you and how important you were to me. You were a brother, a friend, the only person I was indebted to. You were a guide to me.”

Forensic experts have finished their examination of the house, but it remains behind temporary fencing with a security guard on duty.

Last week, Integrated Homicide Investigation Team (IHIT) Sgt. Frank Jang said investigators were awaiting the result of autopsies on all three deceased individuals to determine whether two of the three will be considered homicides.

Until the cause of death has been determined, “we can’t conclusively say” if the two were also victims of homicide, Jang told the Langley Advance Times.

One person, a man, who was discovered in the back yard of the house, had injuries that were “consistent with” homicide, police have said.

The other two were found in the debris of the fire-damaged house and had to be left there until it was considered safe to retrieve them. 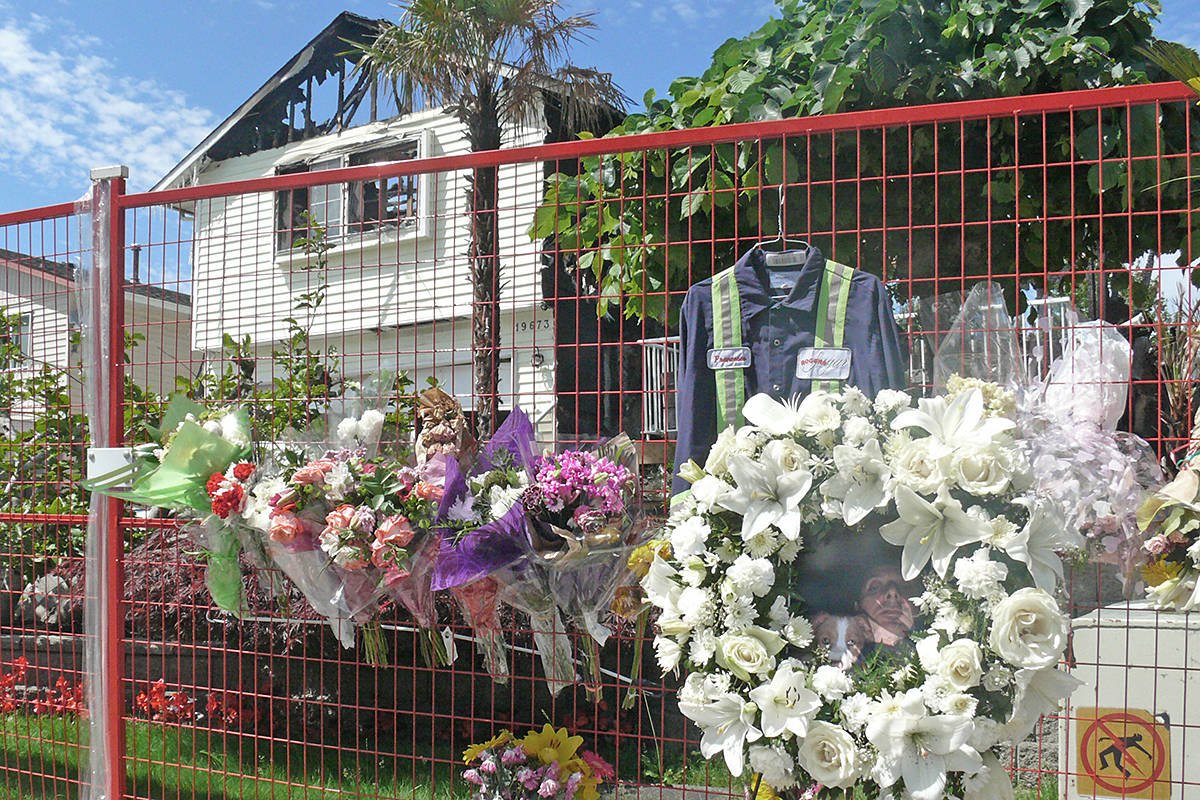 A flower-bedecked memorial to one of three people who died at the scene of a suspicious house fire in Langley stands outside the burnt-out house in the 19600 block of Wakefield Drive on Monday, June 29, 2020. (Dan Ferguson/Langley Advance Times)