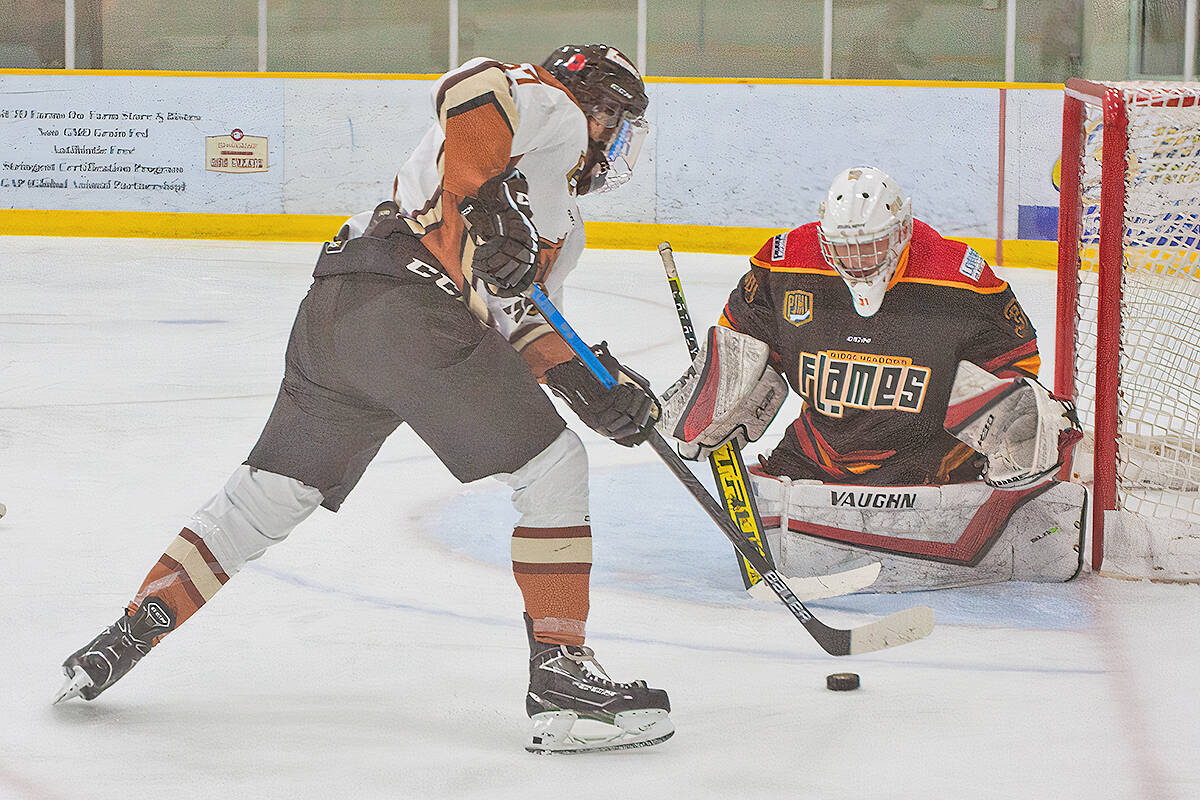 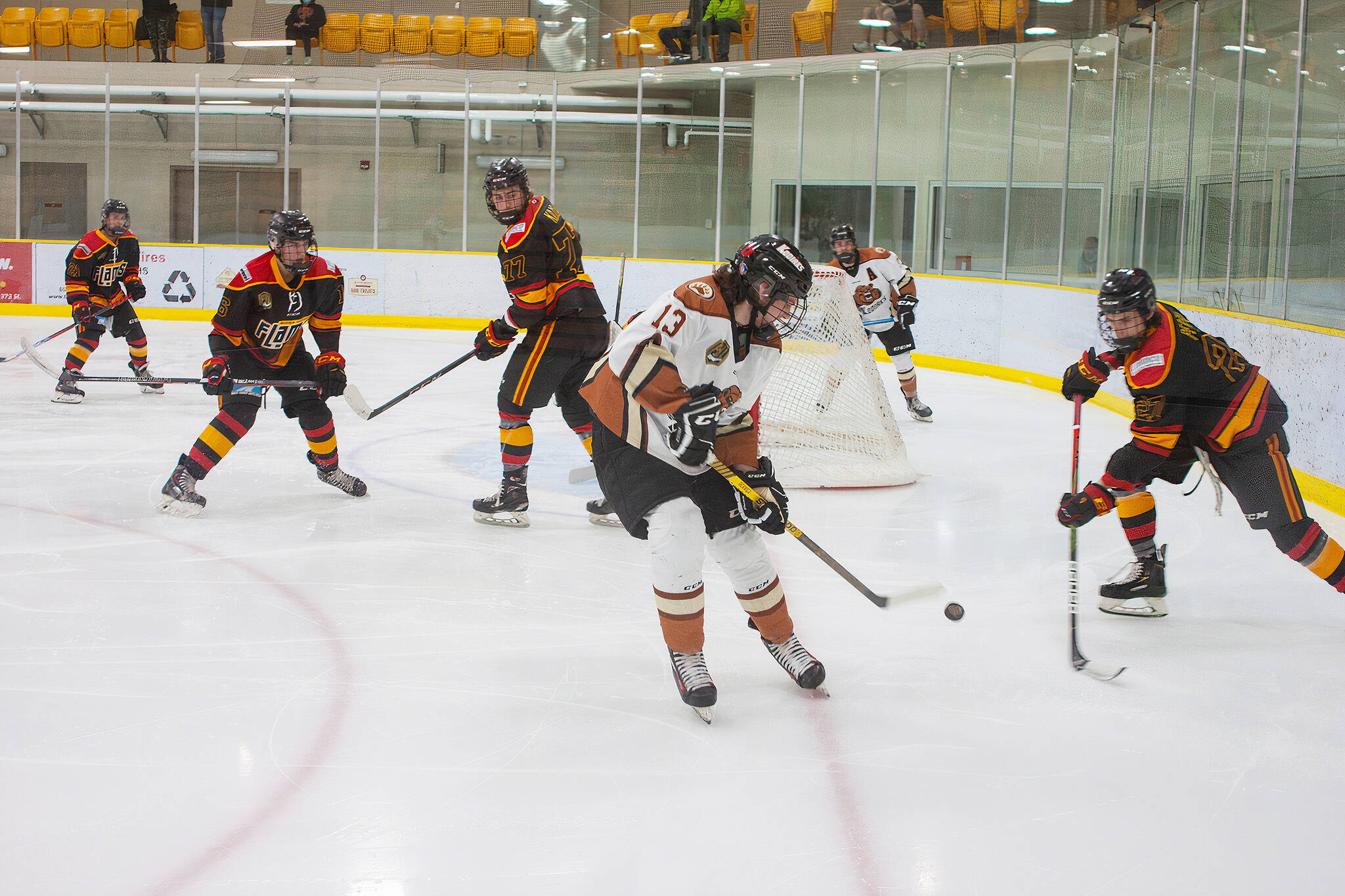 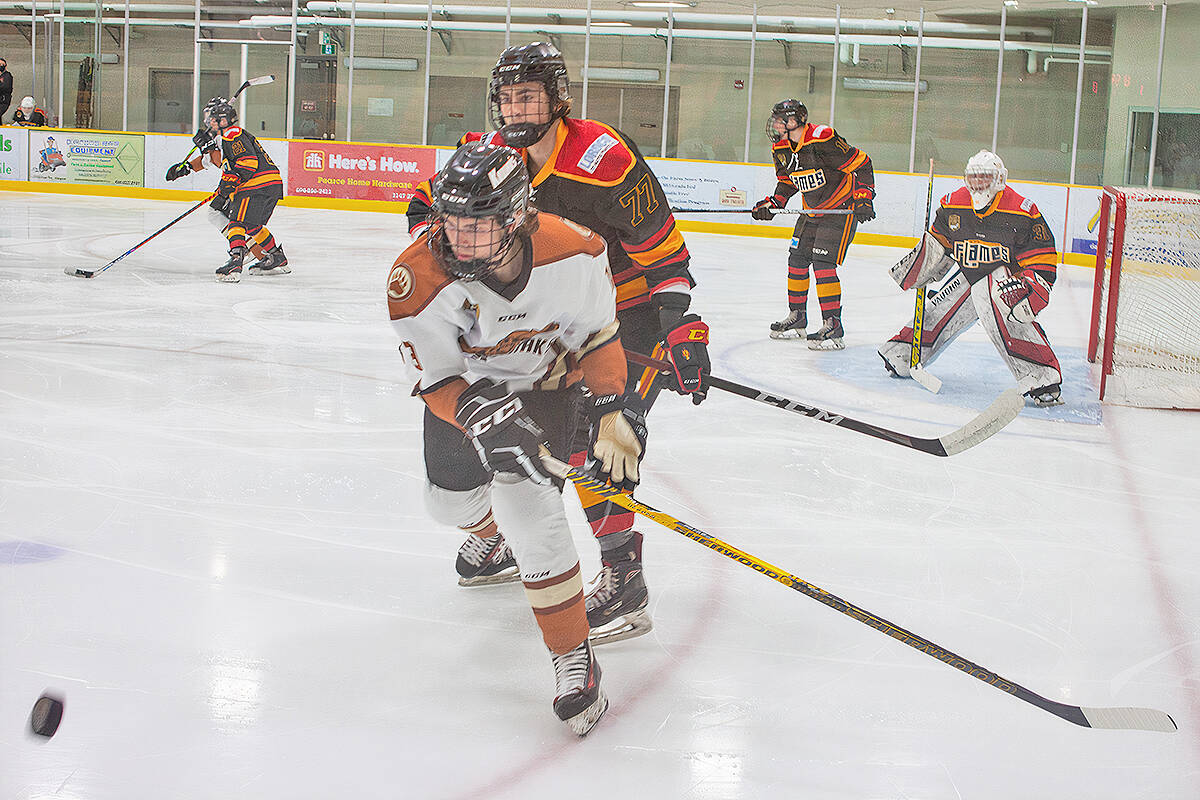 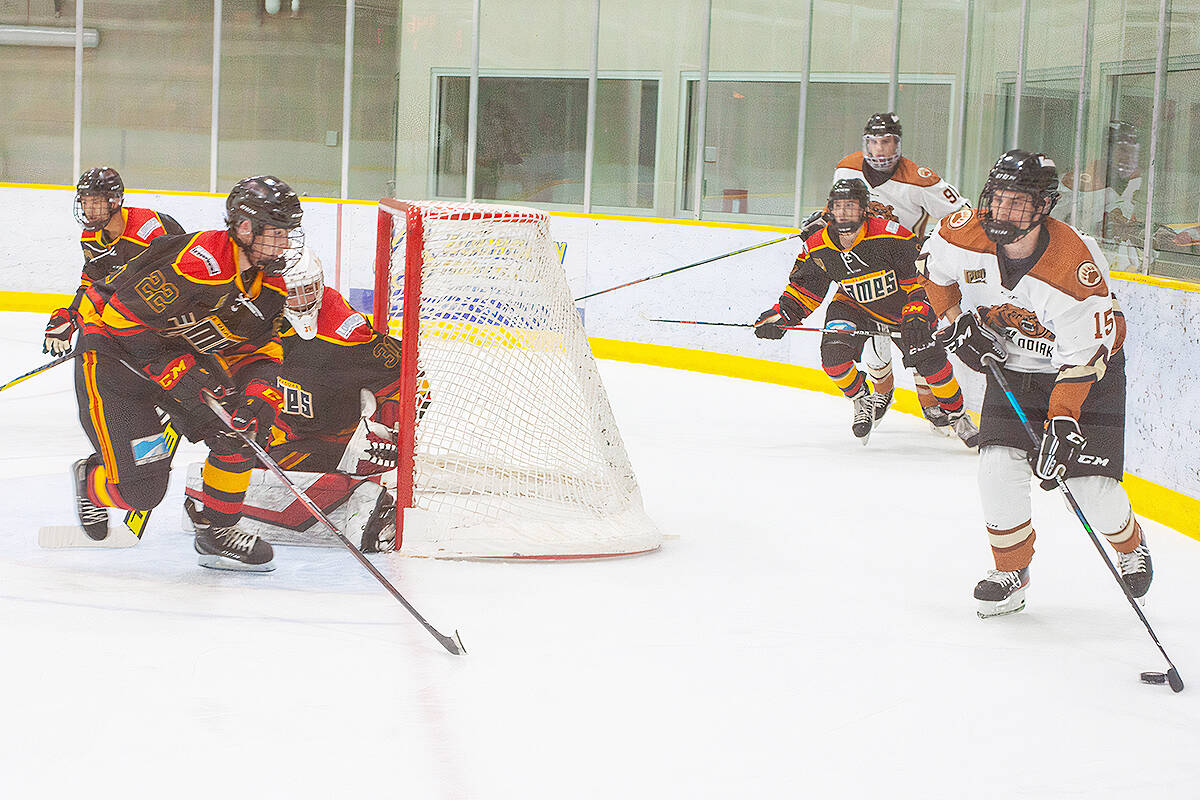 Aldergrove Kodiaks Mason Brown was in position behind the net Nov. 3 as his team downed Ridge Meadows Flames 3-2 at Aldergrove Credit Union Community Arena. The Nov. 3 game was the Kodiaks’ second win in a row over Ridge Meadows. (Kurt Langmann/Special to Langley Advance Times) 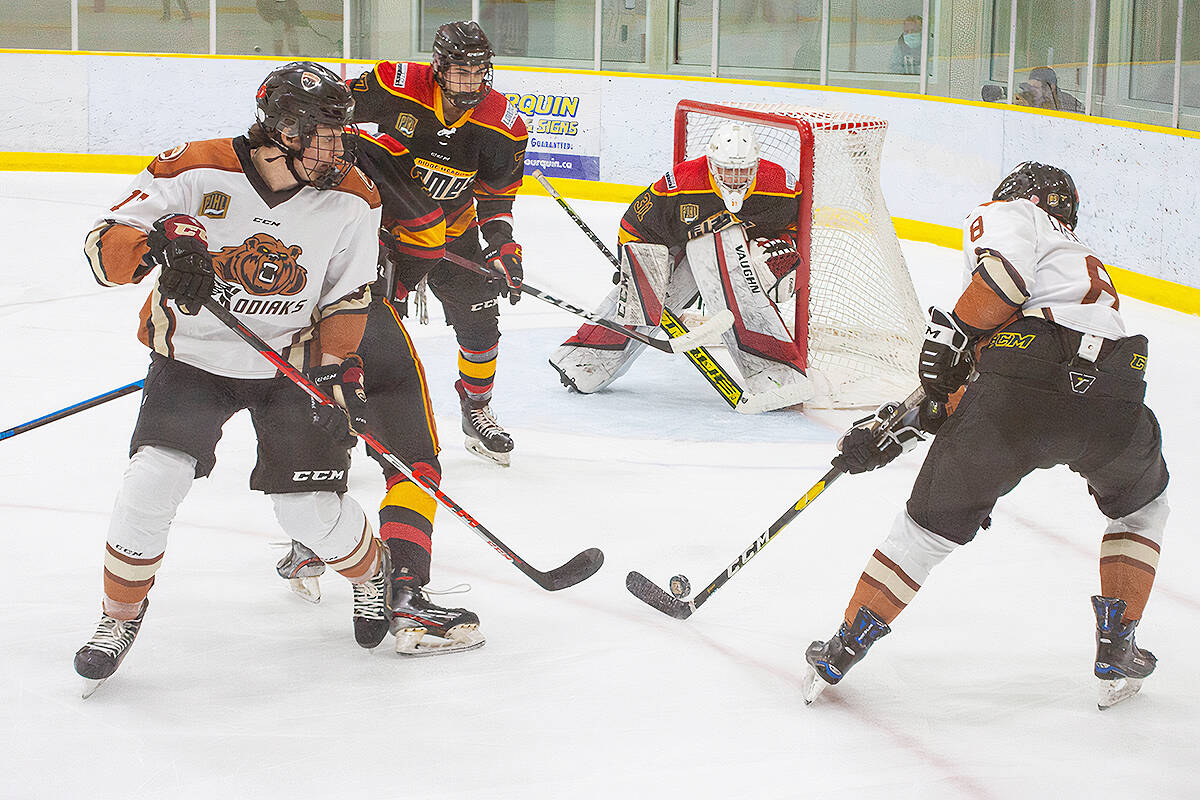 Aldergrove Kodiaks were off to a good start in November, with back-to back wins, beginning with a 3-2 victory over Ridge Meadows Flames at Aldergrove Credit Union Community Arena on Wednesday, Nov. 3.

Kodiaks were first to strike in a back-and-forth scoring battle.

Kodiaks forward Trevor Baron had the first goal of the game at 0:25 with an assist by Mason Brown and Taylor Chiu, then Jordan Kujala replied for the Flames at 5:52.

Lewis Nikkel then moved Aldergrove ahead at 9:00 with an assist from Carson Preston and Kale Taylor, then Ryan Denney tied it up for Ridge Meadows at 14.12.

In the second period, Taylor put Aldergrove ahead at 18:58 with an assist by Preston.

That was the winning goal, with both Kodiaks and Flames battling out a scoreless third period.

Kodiaks Mark Paton and Carson Preston were first and second stars of the game.

It was the Flames’ second straight loss against the Kodiaks, following a 5-4 overtime defeat by the Aldergrove team on Friday, Oct. 29 in Maple Ridge. 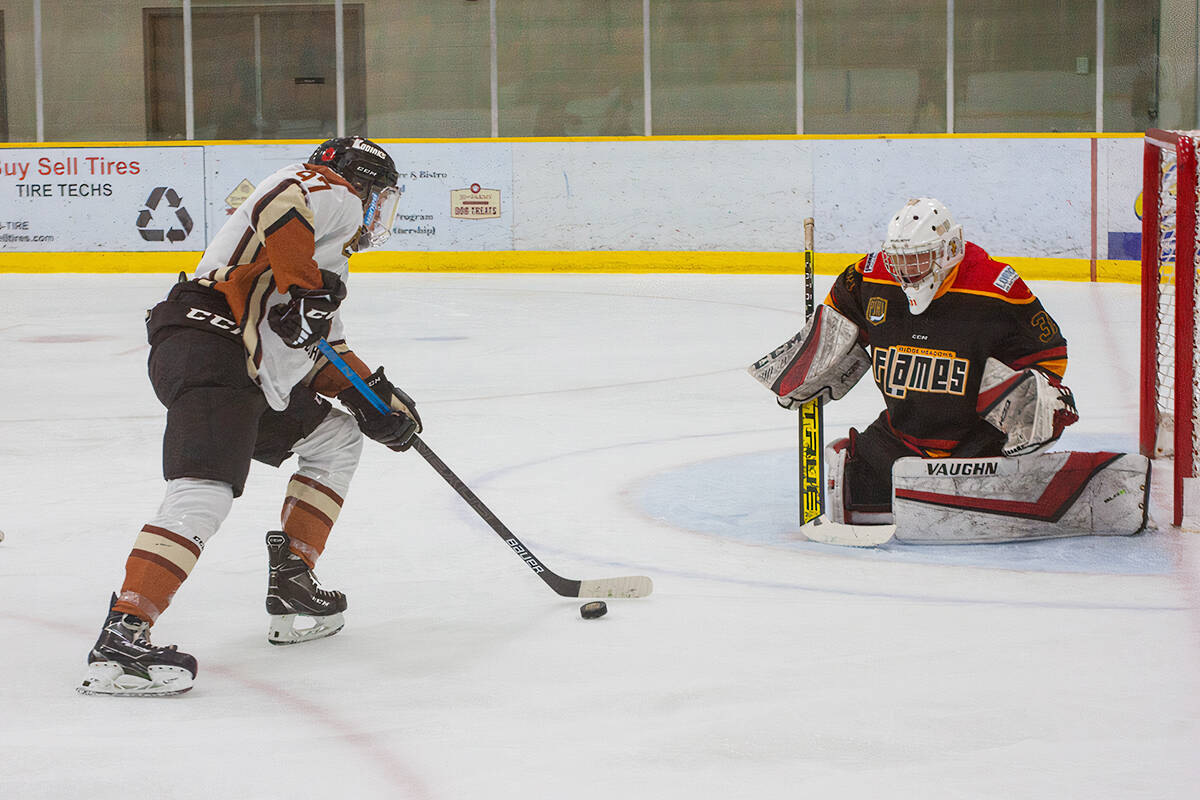 Kodiaks were first to score, with an unassisted Taylor Chiu getting past Grandview netminder Shayan Kermany at 6:22 in the first.

Luke Cox responded for Grandview at 9:41.

In the second, Ryan Sullivan put Kodiaks ahead at 4:11, with an assist from Carson Preston and Lewis Nikkel.

Aaron Mark evened things up for the Steelers with an unassisted short-handed goal at 18:08

In the third period, it was all Aldergrove, with scoring by Carson Preston on the power play, with assists from Cameron Northard and Noah Iacutone, then Lewis Nikkel with Kale Taylor and Carson Preston got the insurance goal and finally, late in the game, Taylor Chiu scored on an empty net after the Steelers pulled their netminder

Preston, Nikkel and Chiu were named first, second, and third stars of the game.

READ ALSO: Aldergrove Kodiaks wrap up October with a win

Kodiaks were ranked fifth in the PJHL Harold Brittain conference, while crosstown rivals Langley Trappers are second, close behind the Flames.

Hayden Yahn scored the game winner at 16.39 of the third, with Brendan O’Grady and Jamie Hylands assisting.

Bosnjak was named third star of the game. Teammate Hayden Yahn was first.

Trappers then suffered a 4-1 defeat at the hands of North Vancouver 4-1 at Harry Jerome arena on Nov. 6 with Brendan O’Grady, assisted by Evan Clare, posting the only Trappers goal.