From their head coach on down, the Vancouver Giants’ collective mood was sour Friday night as they processed a 5-2 loss to a visiting Kelowna Rockets team that was missing a handful of marquee players.

“They had a deflated roster and us losing 5-2 to them… we didn’t play well at all,” said Giants defenceman Bowen Byram.

A healthy Giants team with a full roster and with home ice advantage to open the playoffs on the line, couldn’t find a way to beat the Rockets, who, granted, are one of the best teams in the WHL with a B.C. Division-leading 42-22-5-2 record.

“Big time disappointment — big time,” Giants head coach Jason McKee grumbled. “Our game was not very good tonight. We knew what was on the line and we didn’t respond, didn’t execute. It was not a good night for the Vancouver Giants.”

“We’ve been good all year and unfortunately tonight, there wasn’t a lot to like in our game. It goes to prove that you’ve got to play the game the right way. You’ve got to respect the game and if you don’t, you’re not going to win.”

“It was a tough game in a way of, we made plays where we shouldn’t have, and they capitalized on their opportunities and their chances, and I think we gave them the game,” said Giants leading scorer Ty Ronning, who scored his 61st of the campaign in a losing cause. “We didn’t execute our plays and they ended up in the back of our net. We slacked and we need to regroup and be ready for playoffs.”

In the Giants’ final regular season game on home ice, the Rockets scored three times in the opening frame and cruised to victory in front of a near full house of 4,624 fans.

The loss erased any hopes the Giants had of having home ice advantage when they open the playoffs next weekend against the Victoria Royals, who also lost to Everett on Friday night.

Strictly from the numbers on the scoreboard after 20 minutes, the opening period was a bit of a tire fire for the Giants, even though they had outshot the Rockets 17-10.

A pair of goals by Kelowna’s Carsen Twarynski and a single off the stick of Gordie Ballhorn, on a rebound after Giants goalie Trent Miner made a fine save, put the Giants in a three-donut hole.

“We’ve got to be able to rebound from that and claw our way back into the game,” Byram said.

The Giants rallied and owned the positional play in the second period, despite having to kill off a five-on-three power play.

Ronning gave the hosts some life at the 8:40 mark of the middle frame when he swung around the net and wristed a low, hard shot that fooled Salmond on the far side.

But any life the G-Men had was life was drained just past the midway point of the third period, when Kelowna’s Kyle Topping one-timed a beautiful cross-crease feed from Liam Kindree.

The Giants potted the final goal after some excellent work behind the net from Jared Dmytriw, who sped behind the net, dug the puck out of a pile, and centered it right on the stick of Brayden Watts, who snapped a shot over the shoulder of Rockets netminder Brodan Salmond.

With Miner pulled for the extra attacker, Topping blocked a point shot and proceeded to swoop the puck into an empty Giants goal with 1:25 to play to empty out the LEC.

The Giants and Rockets play again tomorrow night (March 17) to finish the regular season. Both teams will be looking for a strong effort to gain momentum heading into the playoffs.

Giants fans had a reason to be in a festive mood, regardless of how the game shook out.

The G-Men are playoff-bound for the first time in four years, and they had their first chance to see WHL hockey at the LEC after a nearly two-week absence.

After their last home game, a 6-1 loss to Everett on March 4, the Giants played their next five on the road, going 3-2 in that span. 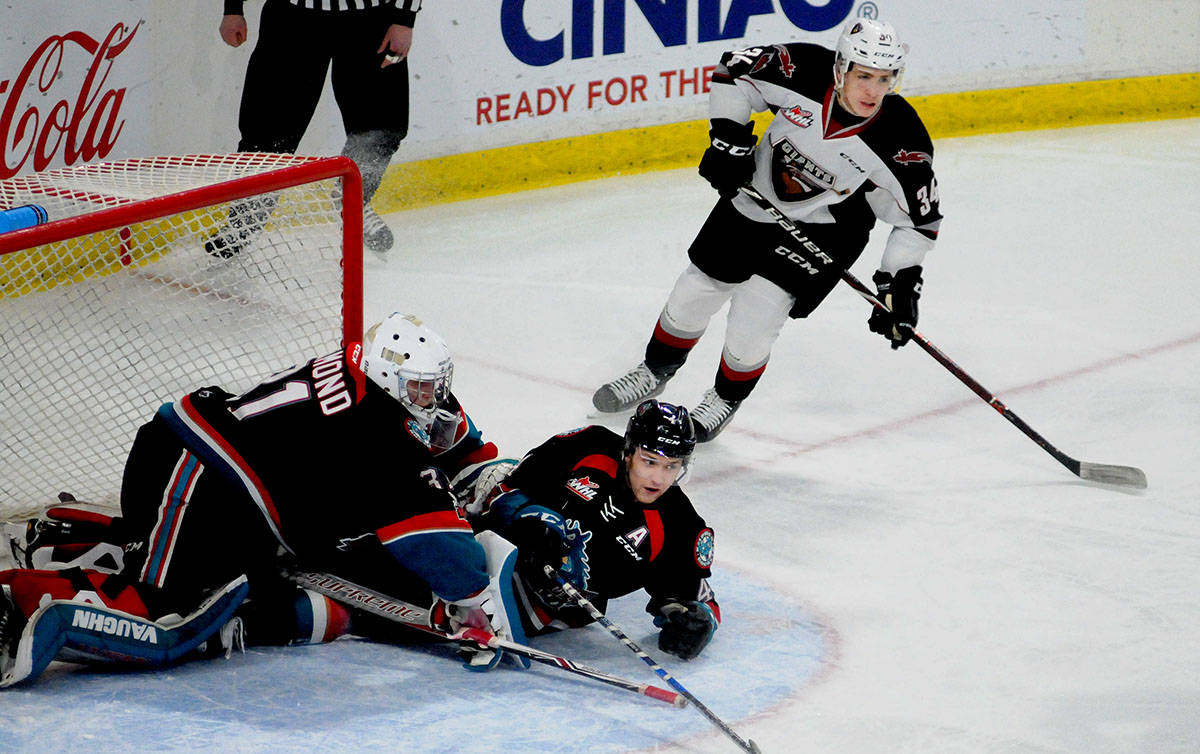 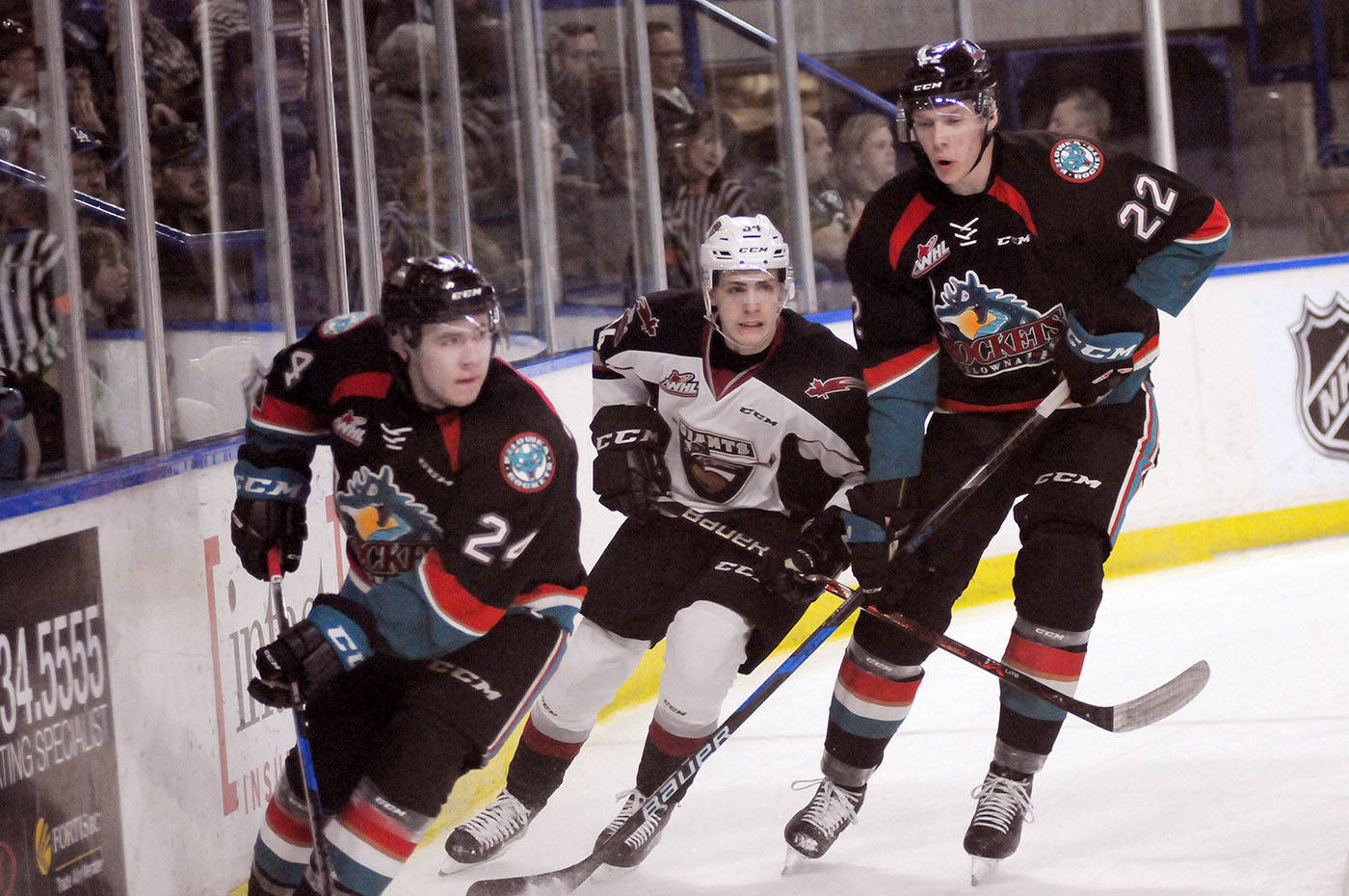 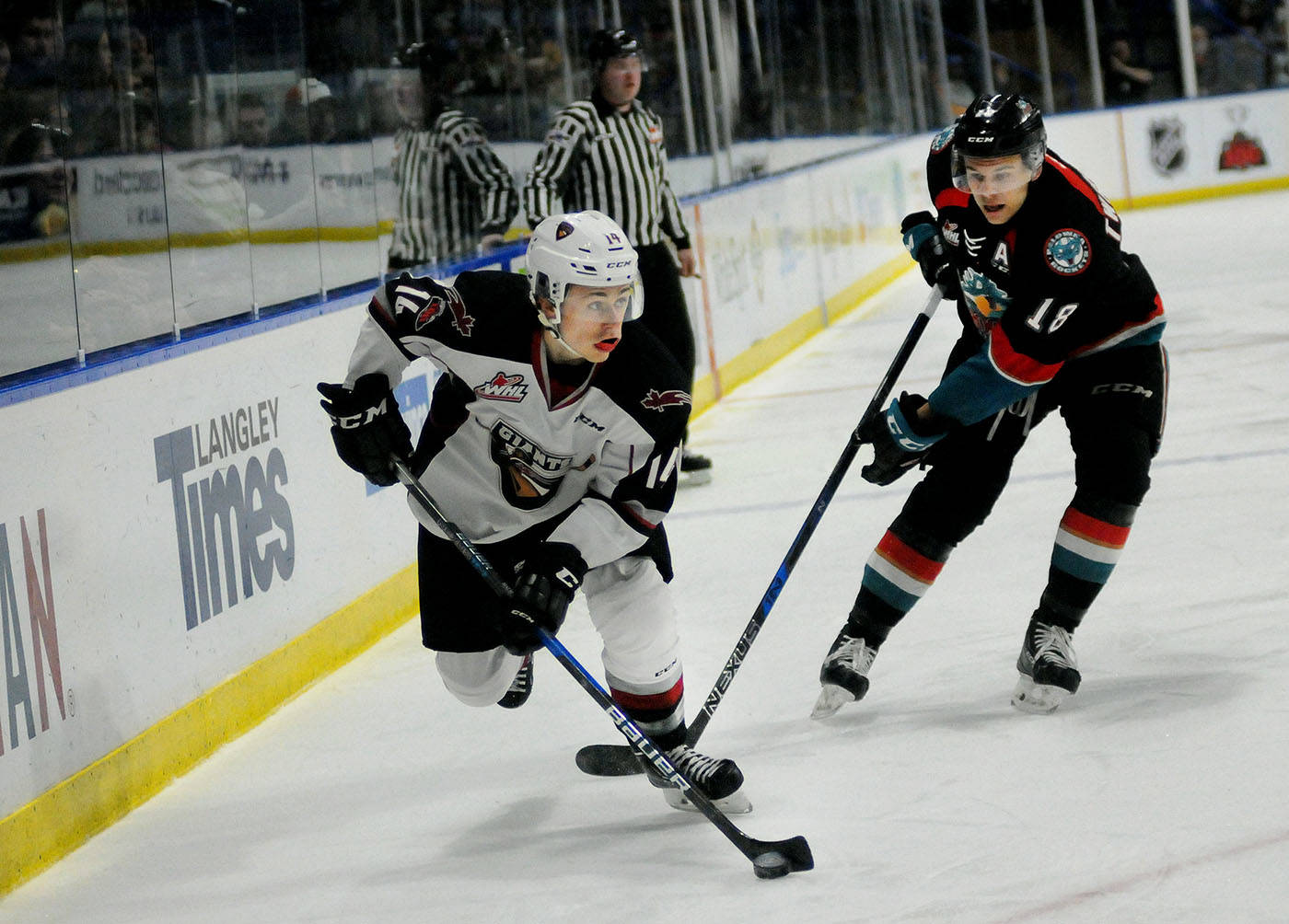 Vancouver Giants centre James Malm moves the puck along the board as Kelowna Rockets left winger Carson Twarynski moves in to check him Friday at the Langley Events Centre. Troy Landreville Black Press 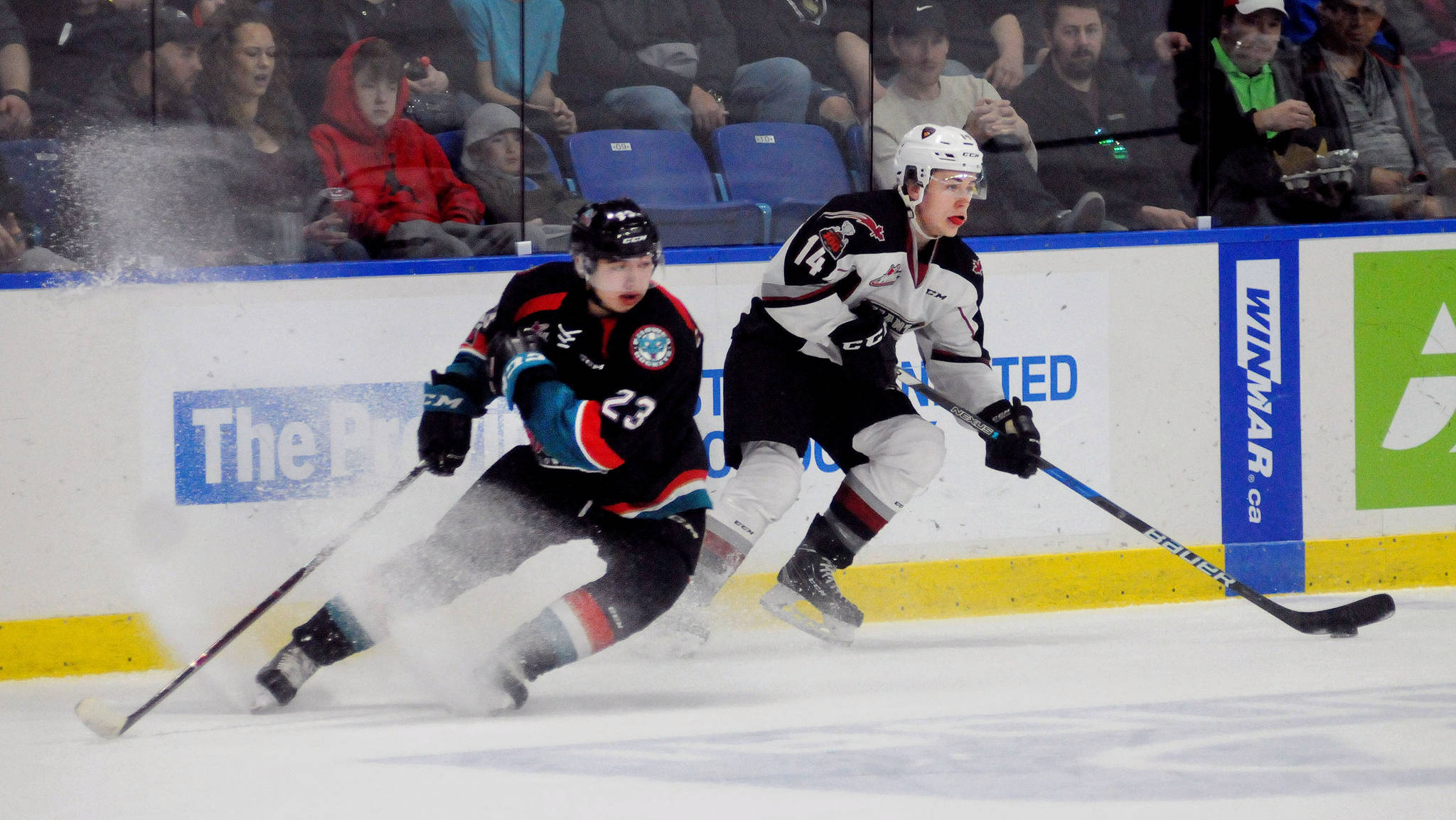 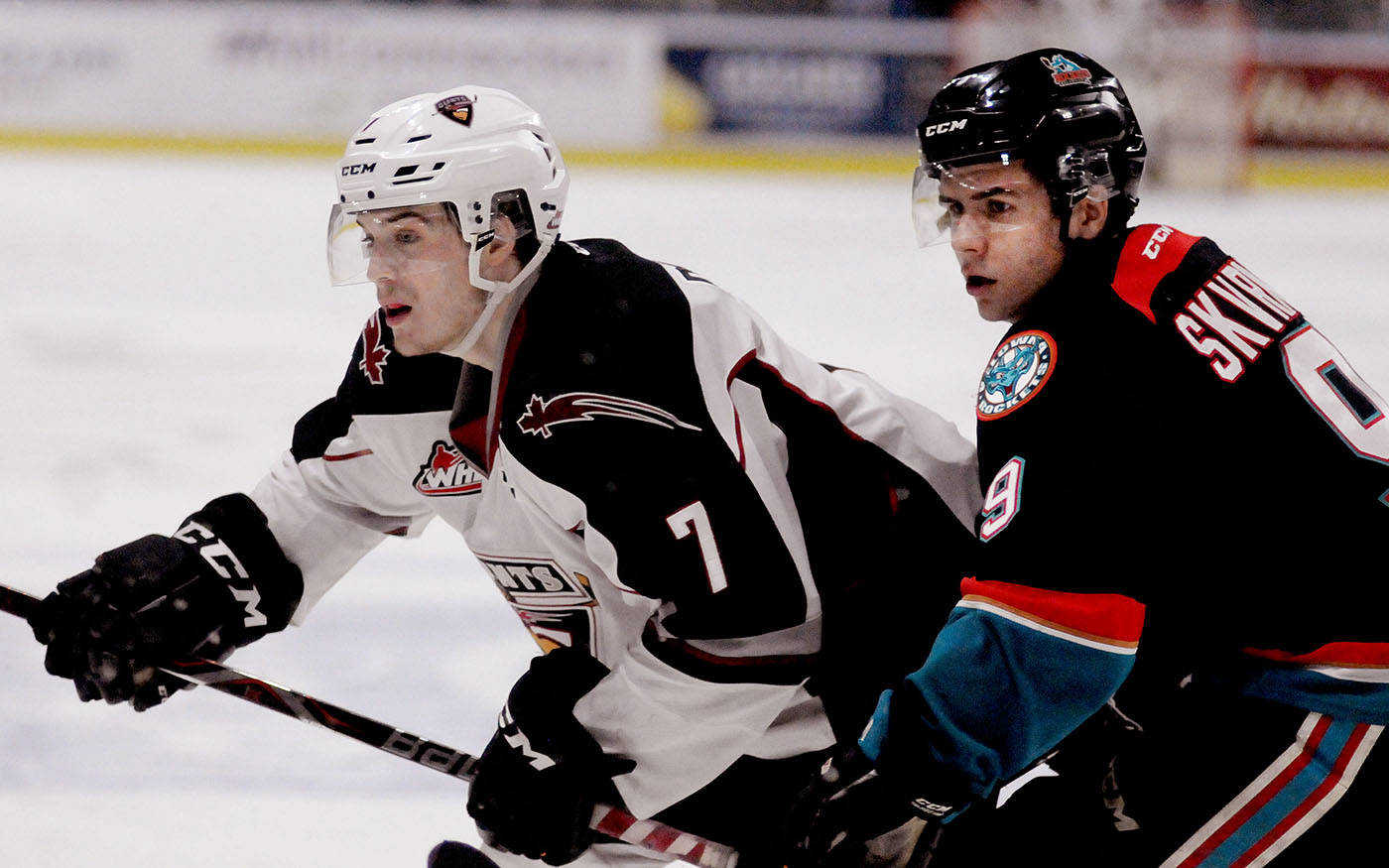 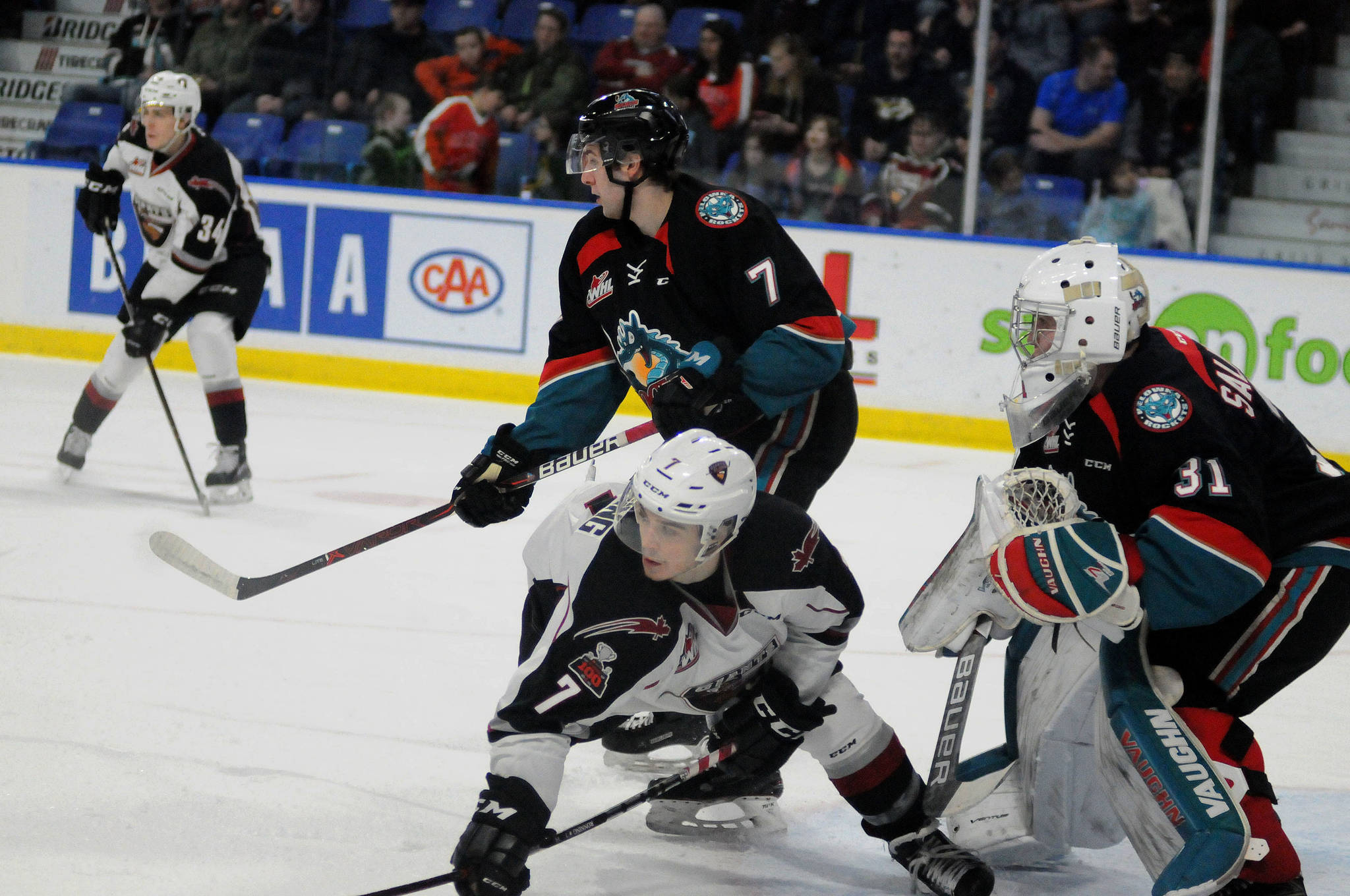 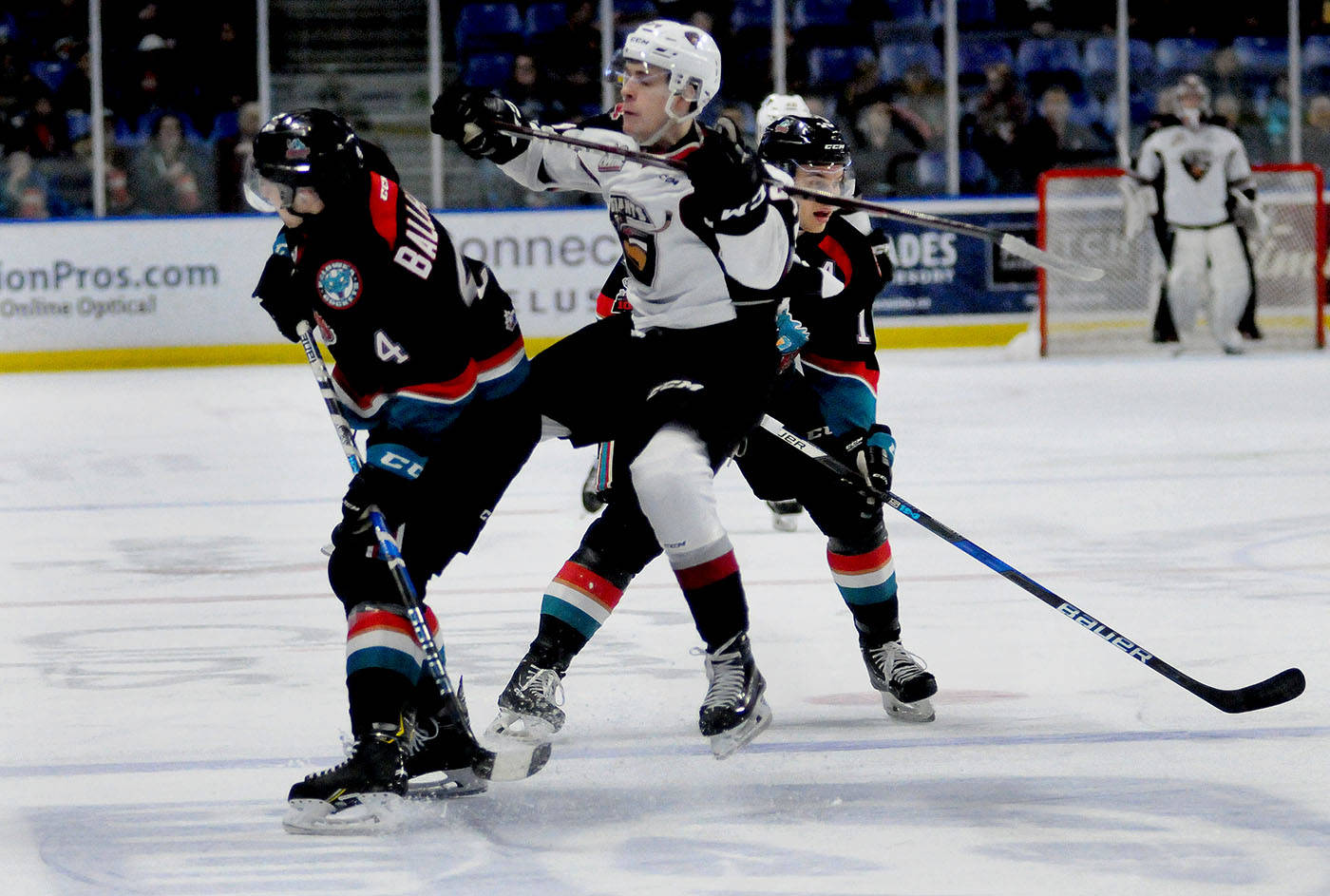