A pair of champions will be decided on Friday while four other teams will battle to see who plays in the other bracket final at the 2022 Tsumura Basketball Invitational tournament.

Friday’s semi-final round will see Kelowna against Burnaby South (3:30 p.m.) in one contest while Oak Bay faces Vancouver College in the other (5 p.m.). Both games are on centre court.

Kelowna Owls coach Harry Parmar did not like the process, but he will take the result after his team outlasted the St. Patrick Celtics 101-96 in overtime.

“We played a scrappy game. I don’t think we played a thinking man’s game today. But that will change as the season progresses – that is why the scores are so high. If we do what we want to do, the scores will be in the 60s, not like this,” said Kelowna coach Harry Parmar.

“But anytime you can gut out a win, you are happy,” he added, while also giving a nod to their opponent.

Kelowna led by as many as a dozen points in the second quarter but had trouble contain St. Patrick scoring sensation Irish Coquia, who scored 54 points. This comes less than 24 hours after Coquia posted a 44-point performance in the team’s opening round win.

However, Coquia would foul out in overtime and the Celtics could not rally after falling behind when Nash Semeniuk put the Owls in the lead for good with an and-1 with 2:16 to play. St. Patrick had scored the first basket of overtime, but it was one of only two field goals they converted in the extra period.

Semeniuk the Owls with 27 points while 6-11 forward Will Keyes scored 21. For the Celtics, Joey Panghulan and Kaden Carrion each scored 17.

With the shot clock winding down and his team holding a one-possession lead, Brady Lau drained a 3-pointer to put the Burnaby South Rebels ahead 66-61. And that bucket proved decisive as the Rebels held off the Enver Creek Cougars 66-65.

of the quarter-final matchup, finally overtaking their Surrey opponent with a 10-0 run bridging the third and fourth quarters for a 56-47 advantage. The Cougars did have one more run in them with a 9-0 spurt of their own to tie the score but could not overtake Burnaby South down the stretch.

Rebels coach Mike Bell called it a sloppy victory, but one his team will learn from.

It wasn’t the play the coaches drew up, but it got the job done. Coming out of a timeout and trailing by a point in overtime, Vancouver College’s Mikyle Malabuyoc’s lay-up put the Fighting Irish ahead for good, as they held off the Fleetwood Park Dragons 78-77.

“They didn’t actually run the play we decided on; it didn’t work out (but) we had said whatever happens, you have to attack,” said VC coach Mer Marghetti.

The Dragons opened the five-minute overtime period with a pair of buckets to go up 74-70, before the Irish scored the next 5 points to re-take the lead. From there, it was free throws as Fleetwood Park sank 3 foul shots to Vancouver College’s 1, setting the stage for Malabuyoc’s heroics, which was his second chance to play hero. With time winding down in regulation, he has stolen the ball and raced down the court only to have his lay-up at the buzzer swatted away by the Dragons’ Aaron Uppal.

The Oak Bays put on an offensive show, scoring 58 points in the first half alone as they routed the Sir Winston Churchill Bulldogs 99-56. Ten different Bays players scored at least 2 points with Griffin Arnatt leading the way with 22. For the Bulldogs, Jackson Bryson scored 16 and Luka Subotic had 10.

The Lord Byng Grey Ghosts made a second-half push, but the Spectrum Thunder held them off for the 61-57 victory. The Grey Ghosts would cut it down to a 1-point game in the fourth quarter but could get no closer.

“Their zone at the end definitely gave us some trouble. And our centre (Tyler Felt) having 4 fouls was tough. We had to put him in with 8 minutes left and tell him don’t get one,” said Spectrum coach Tyler Verde. “But we had some good guard play and Justin (Hinrichsen) carried us; he hit that bank 3 at the end, which was huge.”

Hinrichsen led all scorers in the game with 20 points while Felt chipped in with 16. Lord Byng’s Marko Radic led his team with 19.

The North Delta Huskies built an early lead on their way to a 78-52 win over the Steveston-London Sharks. The Huskies’ Harvir Hothi scored all 20 of his points in the first half while Krishian Jeet had 15. The Sharks’ Roop Jaswal led this team with 14.

It will be an all-Langley affair in the Draw 3 final with Langley Christian going up against R.E. Mountain. (Centre Court, 10:30am).

The Langley Christian Lightning took the words of head coach Brodan Thiel and delivered on his pre-game message.

“I just told them, make sure we are the hammer and not the nail; make sure we are bringing the intensity and taking it to the them and they responded really well,” said LCS coach Brodan Thiel following his team’s 82-46 semi-final win over the Burnaby Central Wildcats.

The Lightning scored the game’s first dozen points and led 21-8 after a quarter and 41-17 at the half to cruise to their victory.

“Great first half. Seventeen points at the half – you can’t ask for anything more out of the guys.”

Braeden Wagar led LCS with 19 points and Carter vanderWaarde had 14. For the Wildcats, Bilal Alemzai had 15 points.

The Lightning now prepare for the championship final of Draw 3, where they will face the R.E. Mountain Eagles.

“As every round goes on, we need to increase our play and understand the competition is getting tougher and tougher, and the boys stepped up today to that challenge,” Thiel said.

A 2-point game at the half, the R.E. Mountain Eagles outscored the Credo Christian Kodiaks 27-17 with those extra 10 points turning out to be the final margin of victory in a 74-64 win.

“Credo is a tough, scrappy team so we had to match their intensity. I think the first half we struggled with that, but then in the second half, we put on a press and were able to step up our game, both physically and intensity wise.,” said Eagles coach Kirk Weiss.

There is no cost to attend the games, which will also be streamed for free at www.tfsetv.ca 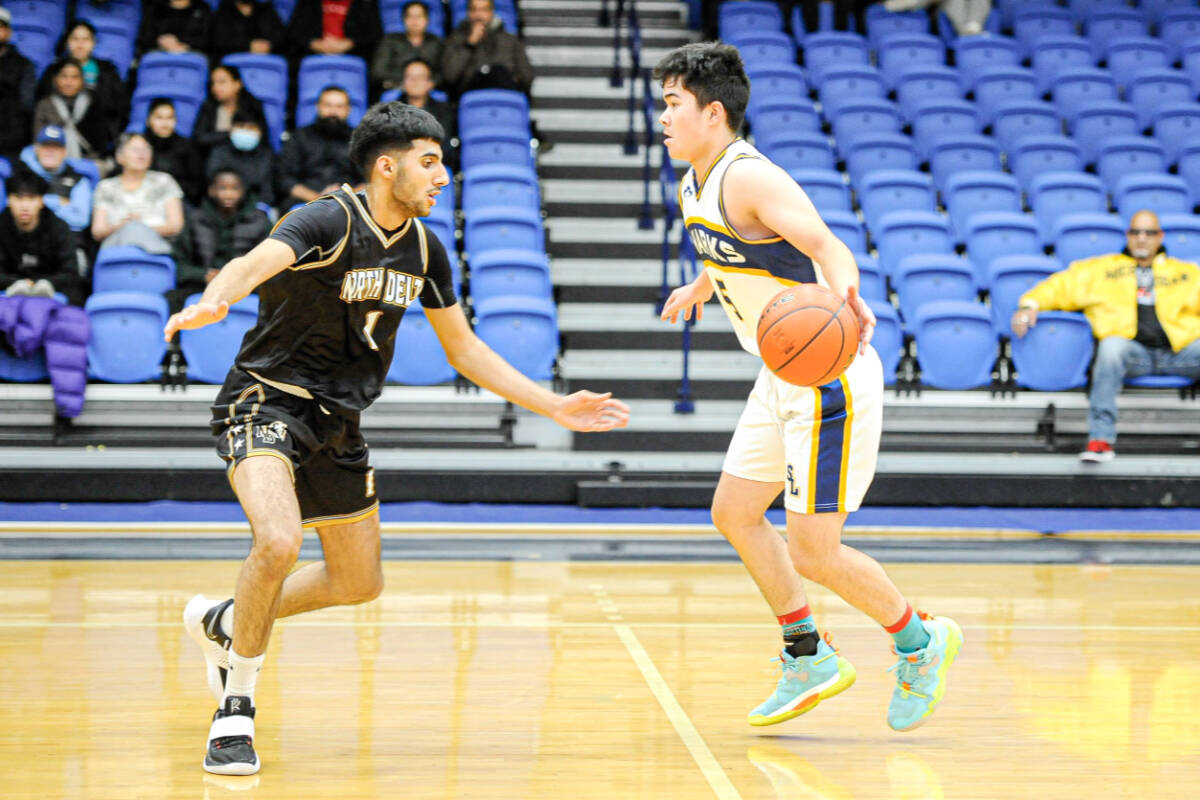 A pair of champions will be decided on Friday while four other teams will battle to see who plays in the other bracket final at the 2022 Tsumura Basketball Invitational tournament. (Photo courtesy of Ryan Molag/Langley Advance Times)