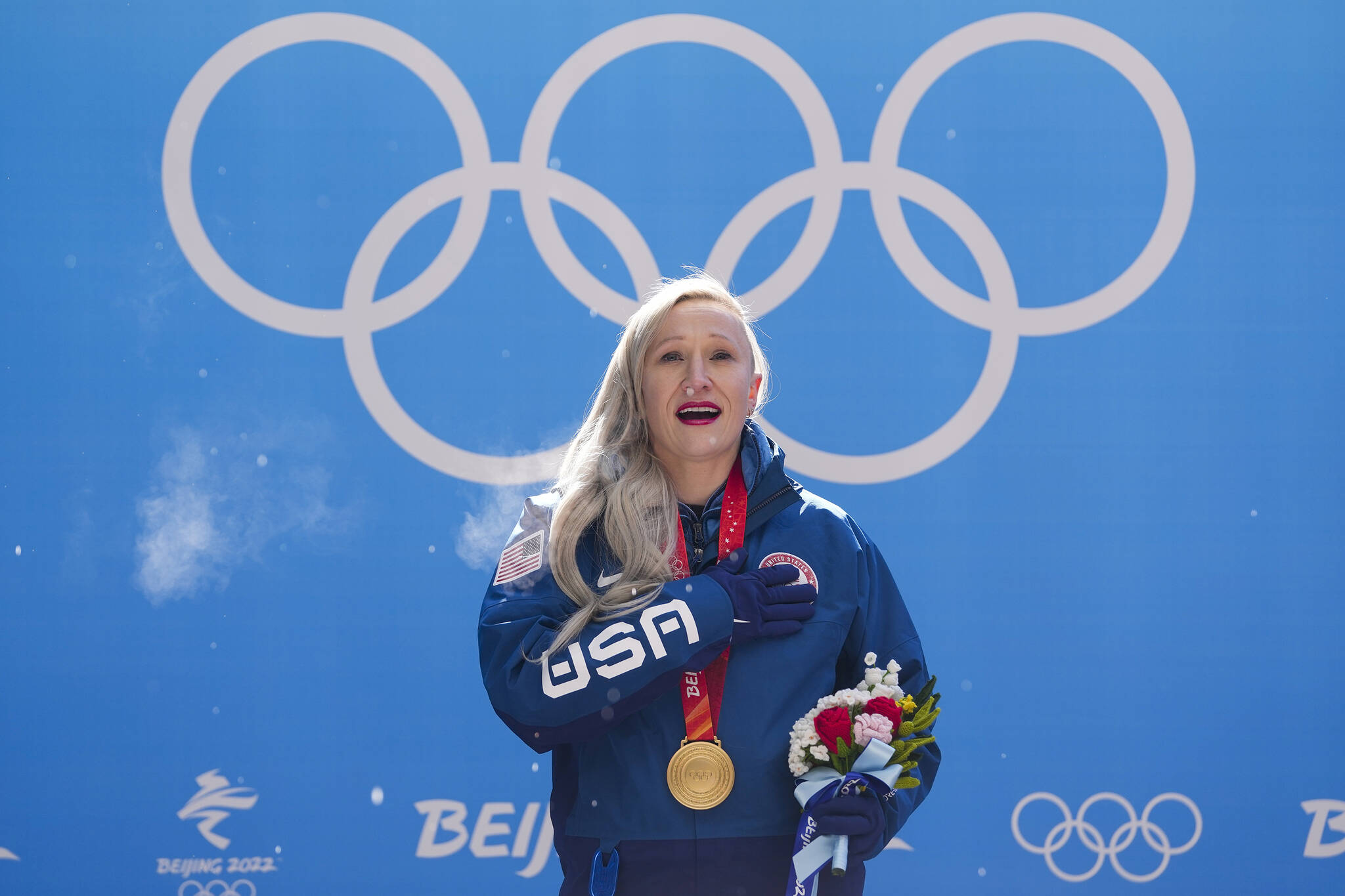 Kaillie Humphries, of the United States, sings the national anthem after winning the gold medal in the women’s monobob at the 2022 Winter Olympics, Monday, Feb. 14, 2022, in the Yanqing district of Beijing. (AP Photo/Mark Schiefelbein)

If bobsledder Kaillie Humphries got a bit emotional on the podium, if the third gold medal of her storied career felt more special than the others, there was good reason.

“It has been a journey to get here,” she said. “It hasn’t always been easy.”

The actual racing might have been the easiest part, as Humphries confirmed she is the best in her sport, outpacing the nearest competition by a sizeable 1.54 seconds to win the debut of women’s monobob at the Beijing Olympics.

The track’s 16 turns — including one that swirls 360 degrees — are designed in the shape of a Chinese dragon.

“When you nail the corner and you feel the sled accelerate, you feel like Superman,” Humphries said. “Like you’re just flying.”

But the real story was what happened before she arrived in China. As recently as two months ago, it was unclear if the 36-year-old Olympic veteran would be allowed to compete.

A native of Calgary, Humphries won two golds and a bronze for Canada at previous Games but walked away from her country’s sliding program in 2019. Lingering tensions caused the split and she filed a lawsuit against her coach for verbal and emotional abuse.

Though USA Bobsled/Skeleton welcomed her, government slowdowns caused by the pandemic made it difficult to obtain the required citizenship. The U.S. Olympic & Paralympic Committee, with help from a bipartisan group of legislators, finally got her approved in early December.

“I’ve had a lot of fears and doubts,” Humphries said, expressing gratitude to a new country that “stood behind me.”

There was yet another battle — this one within the sport of bobsledding — that she and Meyers Taylor waged together.

As two of the world’s most-skilled pilots, they wanted female bobsledders to have more opportunities than just the traditional two-woman sled. The pair were not able to get four-woman approved but the international federation agreed to add monobob.

“Everybody told us we should quit,” Meyers Taylor said of their campaign. “To have that event and to be next to her on the podium, it’s like a storybook ending.”

The 37-year-old Meyers Taylor faced some challenges of her own in China, testing positive for the coronavirus after arriving. While everyone else took practice runs in Yanqing, she worked out alone in isolation.

“There was so much fog in my head,” she said. “I was really questioning whether I should come out.”

Her coaches and teammates convinced her to forge ahead. Sitting in fourth place after two runs Sunday, she adopted a go-for-broke mentality that resulted in enough speed to lift her to a silver medal.

“I just went out there, enjoyed the heck out this race and fortunately it paid off,” she said.

Humphries needed no late charge for her victory. Though not the fastest starter in the field, she displayed considerable piloting skills to lead by more than one second after the first day. It wasn’t so much if she would win, but by how much.

De Bruin, meanwhile, remained steady enough to hold onto third place. She said: “I’ve been told I’ve been called Mrs. Consistency before and that’s really what I wanted to do.”

But Monday belonged to the Americans, both new and old. It marked the fourth time that Humphries and Meyers Taylor have shared an Olympic podium over the last 12 years; their first time wearing the same uniform.

“To be teammates with her and to go one-two is a testament to how strong we are.”

She wasn’t talking about just bobsledding.