It is down to a best-of-three to determine the 2022 Mann Cup champion after the Peterborough Lakers pulled away in the third period of game four to even the series at two games apiece with a 15-12 victory over the Langley Thunder.

The teams were playing game four of the best-of-seven series on Tuesday night, Sept. 14, at the Peterborough Memorial Centre.

Thunder were ahead 6-3 with just over four minutes to play in the first period before the Lakers struck three times ahead of intermission to tie things up. Peterborough coach Mike Hasen said his team was on it’s heels before the offence picked them up and from there on they settled in.

Peterborough would take an 11-10 lead after two periods and after Langley tied things up early in the third, the Lakers scored four of the final five goals for the victory.

“This is Mann Cup lacrosse. You have the two best teams in Canada playing right now. These games aren’t going to get any easier. Everyone is going to have to dig a little deeper on both sides, that is what it is going to come down to: who wants it more,” said Peterborough’s Joe Resetarits. 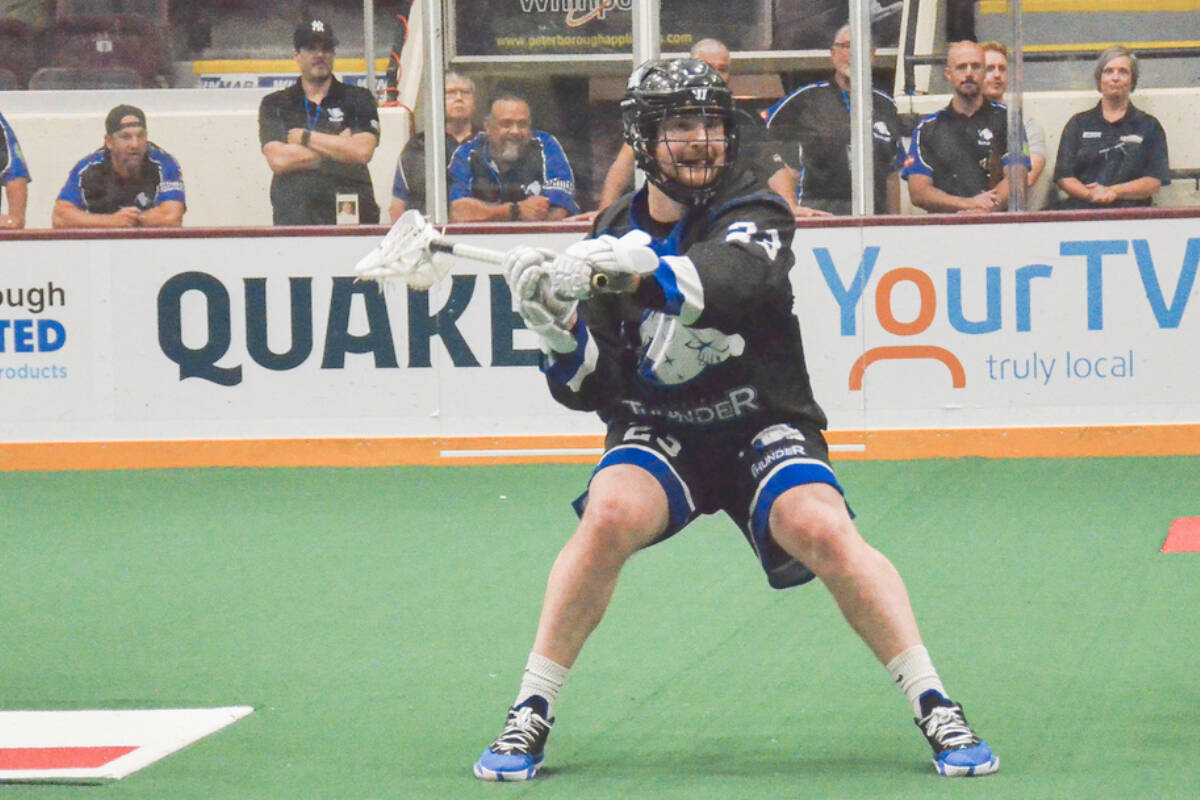 Langley’s Robert Church earned player of the game honours for the Thunder with two goals and three assists in game four of the Mann Cup championships on Tuesday, Sept 14 at the Peterborough Memorial Centre. Peterborough Lakers pulled away in the third period to even the Mann Cup series at two games apiece with a 15-12 victory. (Gary Ahuja, Langley Thunder photo)

This marked the first time this season the Thunder scored a dozen goals and did not come out with the victory.

“We did a lot of things really well and we are really close. We know what we have to do just a little bit better,” said Langley coach Rod Jensen. “Peterborough has elevated their execution these last two games and we need to match that.”

For Peterborough, Resetarits had eight points (two goals, six assists) while Shawn Evans had a goal and six assists. Mark Matthews and Holden Cattoni each had a hat trick and six points while Kiel Matisz (two goals, two assists) and Thomas Hoggarth (two goals, one assist) had two goals apiece. Cory Vitarelli (one goal, two assists) and Taite Cattoni (one goal, one assist) had the other Lakers goals. Matt Vinc made 45 saves on 57 shots.

Church and Evans were their teams’ respective players of the game.