Are we tough enough to win this?

That was the question from head coach Marie Grim to her Langley Christian Grade 8 girls volleyball team.

The Lightning were trailing 9-6 in the fifth and deciding set against the Credo Christian Kodiaks in the Langley District championship came on Tuesday at Langley Events Centre. Langley Christian, the top seed, had been up in the match 2-0, wining 25-23 and 25-18. But the No. 3 Kodiaks stayed alive in the third set with a 25-22 win and then extended the match by winning the fourth set 25-21.

And now Credo Christian had rallied from an early 3-0 hole the fifth set to score nine of the next six points to seize momentum.

“We called the timeout and said the team is going to have to win this, all 13 of us. It is not one player, we don’t have a star, we have a well-rounded team,” Grim explained about her message.

The players took that to heart and came out of the break to score nine of the final 10 points, winning the District trophy 15-10. The LCS Grade 8 girls program has won seven of the past eight District titles. They took second place in 2017.

During the regular season, LCS was 8-0, winning seven of those matches in straight sets, including over Credo Christian in early October. The teams also clashed the previous weekend at a tournament with the Lightning winning in four sets.

“They put up a crazy fight today. We haven’t seen a fight like that from them, I think they are just getting better and better,” Grim said.

Credo Christian had gone 6-2 during the regular season to finish third but they upset the second seed Langley Fundamental Titans in the semifinals.

In the Grade 8 girls District bronze medal match, it was the Yorkson Creek Wolves winning in five sets over the Titans, taking the decisive set 15-8.

And while the Grade 8 girls District final had plenty of suspense in determining the outcome, the Grade 8 boys District championship final – also featuring Langley Christian and Credo Christian – was a fairly routine victory for the top-seed Lightning.

It even took prompting from Lightning coach Jeff Bontkes to get his players to react once the final whistle blew.

“I have no idea. I think maybe they made a little pact amongst themselves that they weren’t going to celebrate or something,” he said.

And the key was consistency.

“Every time we were down, we just played our game and came out. Bump, set, kill. Just back to basics,” Bontkes said. “And our passing – everything starts with the pass.”

The Lightning defeated Langley Fundamental in one semifinal while Credo Christian took care of Yorkson Creek in the other. 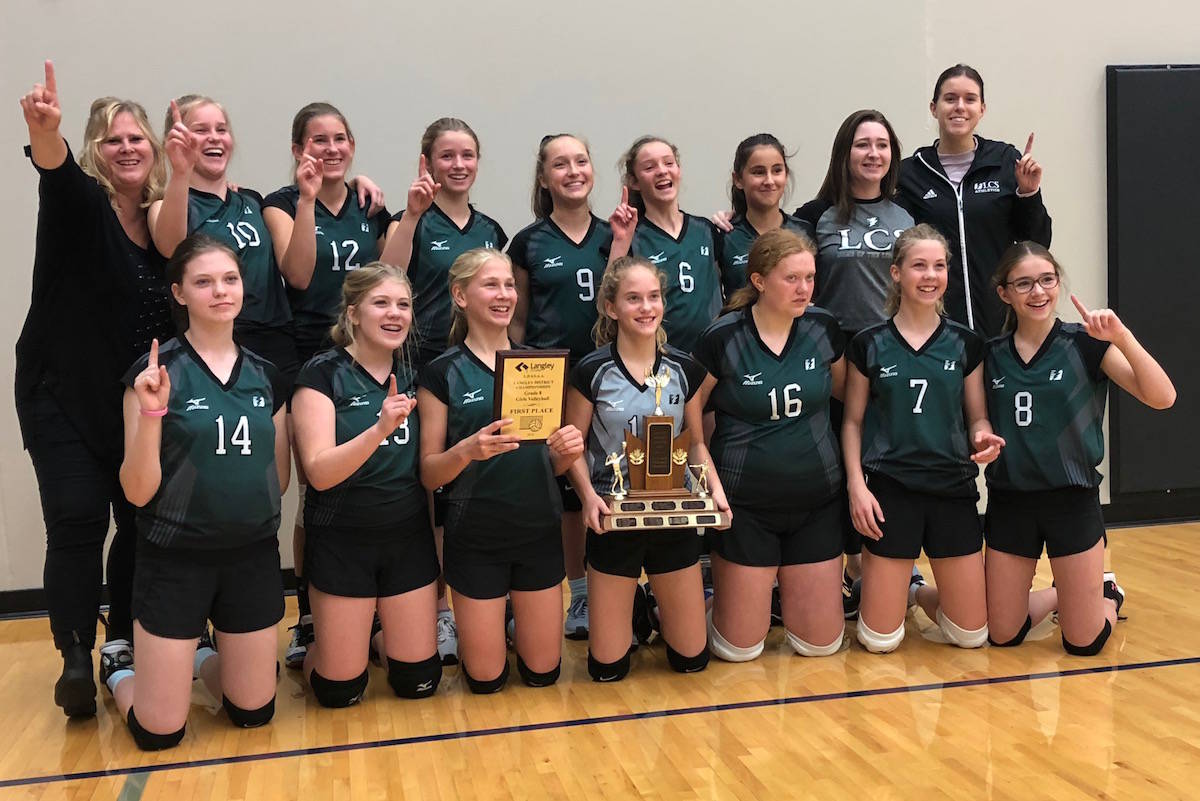