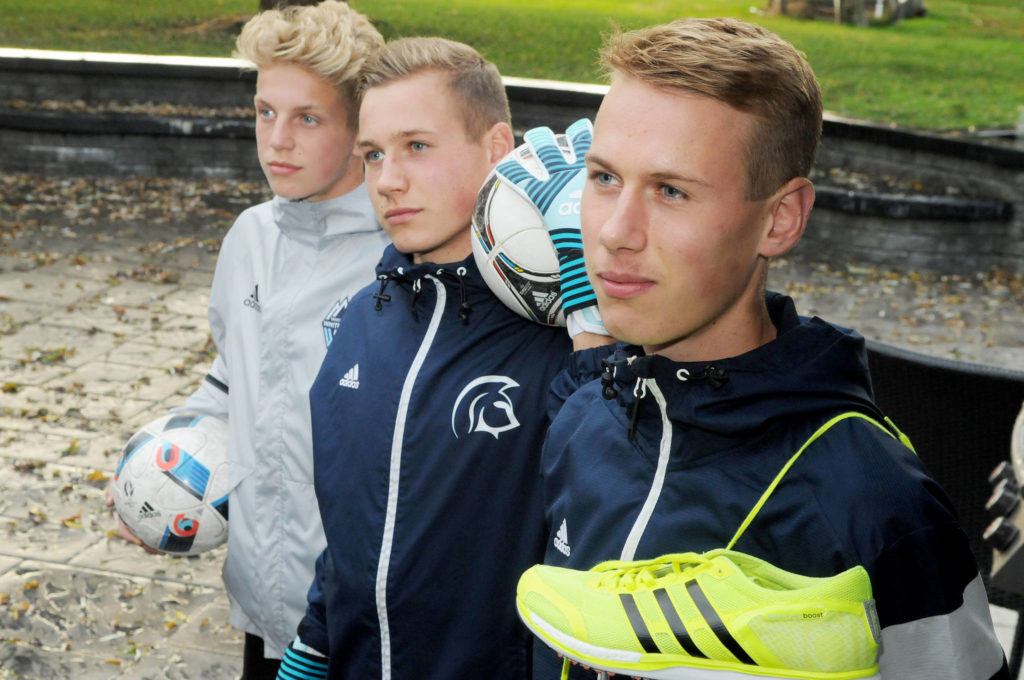 The Colyn brothers — Nick (right to left), Sebastian and Simon — are each excelling in their chosen sports. Nick, the eldest, is a cross-country runner for Trinity Western, while middle brother Sebastian is a goalkeeper for the Spartans soccer team. Simon is part of the Whitecaps Residency Program. Troy Landreville Langley Times

Nick, the eldest, is a 20-year-old cross-country runner in his third year at Trinity Western University.

Middle brother Sebastian is an 18-year-old goalkeeper in his freshman season with TWU’s men’s soccer team.

Needless to say, almost everything is a contest amongst the trio.

“There is definitely a big competition in our family,” Nick said. “Whether its FIFA or doing anything around the house, or anything else that needs to get done, it is usually a competition.”

“Whoever does it first, whoever can get mom and dad to mention it first, or who gets noticed,” added Sebastian.

“It is like you are always fighting for a spot and always trying to prove yourself,” offered Simon.

The brothers also use this competitive drive when it comes to improving themselves, as well.

Nick, the eldest, has been the tone-setter.

“I think we all push each other, even though we are in different settings,” he explained. “When I made my first national team two years ago, I could see that inspired them to step up in their games as well.

“They realized it was more than just practice, they had to do extra to succeed.”

Sebastian said he learned from his older brother’s example, especially once Nick graduated from Langley Christian and enrolled at TWU.

“I noticed right away an increase in his discipline,” Sebastian explained.

“He would come home, do the books, do his runs, and make sure everything was in order before he did anything else — just get his nose down and get the work done.

“I really modeled that coming here for my first year on and off the field and outside school.”

“It is something to look up to and you always want to be as good as them, if not better,” Simon said.

“So it always pushes you and makes you want to be better.”

All three are doing big things in their respective sports.

Nick is part of a Spartans cross-country team which is ranked third in the country heading into this weekend’s BC cross-country championships.

Sebastian was the U Sports male athlete of the month for September.

And Simon is a midfielder/defender for the Whitecaps FC U17 Residency Program. He was named the Whitecaps youth player of the month for September after delivering four goals in the team’s first four matches.

All three have drawn compliments for their work ethic.

“Sebastian would probably call me three-four times a week to get on our training field (this summer) so he and his brother (Simon) could work out and get ready,” said TWU coach Mike Shearon.

And that willingness to work on and off the field paid off with Colyn earning the Spartans starting gig, and never surrendering the net, playing every minute of the team’s 16 regular season games.

“He put the work in over the summer (and) during the season, he has continued to grow in confidence,” Shearon explained.

“And the guys love him, they believe in him, and when you have a goalie the team wants to play for and believes in, then it makes everything else a lot easier, they are not playing afraid.”

“Just an amazing work ethic and that never give-up attitude,” he said.

An example of that leadership is how even in Nick’s first year with TWU, some of the third and fourth-year members of the team would look to him for approval on their training methods, Bomba said.

“Even though he is a younger guy, he is amazingly mature and just a wonderful kid.”

NHL needs to take action on hits to the head: former NHL goalie