United States have booked their spot in Saturday’s championship final for the World Under-17 Hockey Challenge in Langley thanks to their fifth victory in as many tries.

All that remains to be seen is which team will oppose them for the gold medal, with Finland currently holding the inside track as both teams were victorious on Tuesday.

The seven-team, 10-day tournament is being co-hosted by Langley Events Centre and Delta’s Sungod Centre and wraps up on Saturday, November 12 at LEC.

READ ALSO: Canada versus Canada goes into overtime at World Under-17 Hockey Challenge in Langley

Henry Mews went from the penalty box to being the overtime hero as, 13 seconds after returning the ice, the Canada White captain wired home the winner in a 6-5 win over Czechia.

“That’s why he’s the captain. He’s a leader. He has been playing hard and a lot of minutes. It wasn’t a bad penalty, but in the end, it is how you respond and he responded with that goal,” said Canada White coach Bruce Richardson.

It gives Canada White a 1-2-1 record and three points with two preliminary round games remaining while Czechia fell to 0-3-1 and one point.

Éliot L’Italien (Canada White) and Jakub Fibigr (Czechia) were their teams’ respective Players of the Game.

Five different players found the back of the net as Finland doubled up their Nordic neighbours, Sweden 6-3, improving to 3-1 and nine points with two games remaining in preliminary round play.

“Sweden is always a rival for us, so it is always extra special against them,” said Finland coach Marko Kauppinen. 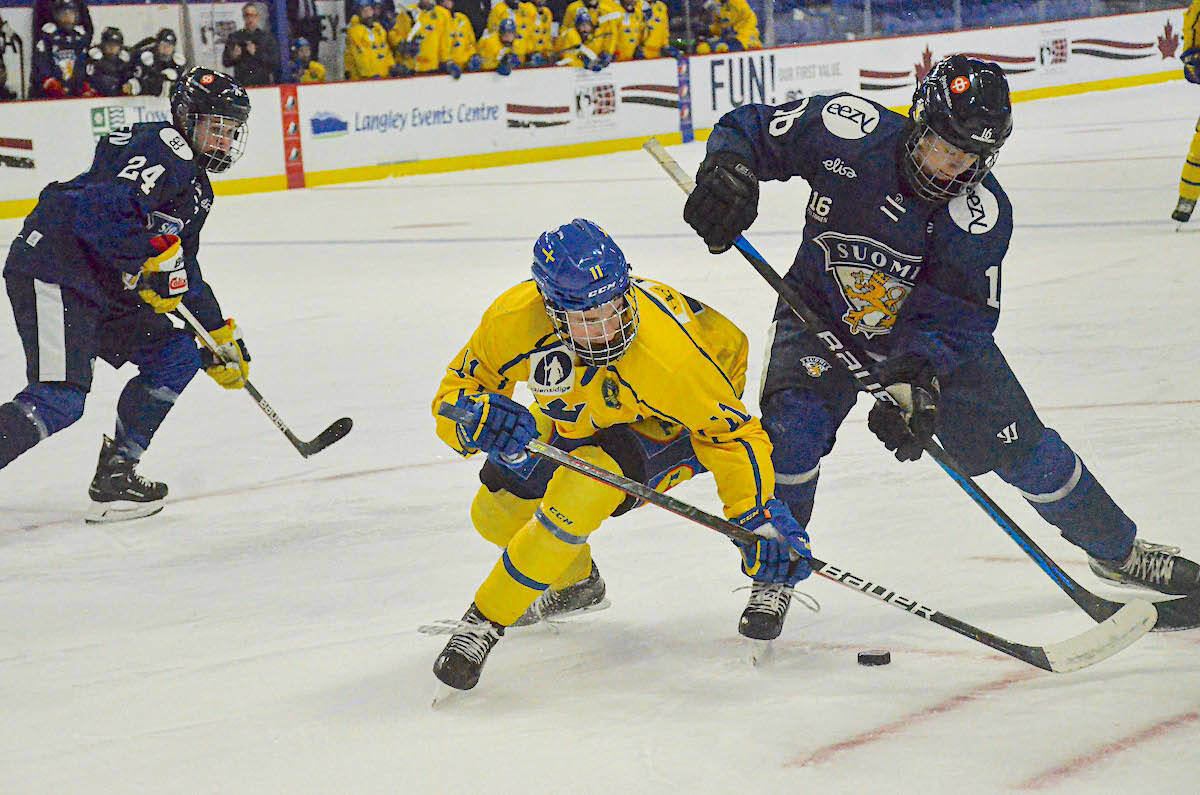 Five different players found the back of the net on Tuesday, Nov. 8, as Finland doubled up their Nordic neighbours, Sweden 6-3, improving to 3-1 and nine points with two games remaining in preliminary round play at the World Under-17 Hockey Challenge co-hosted by Langley Events Centre and Delta’s Sungod Centre (Langley Events Centre)

Tuesday’s game saw three goals in a span of 1:41 with Joona Saarelainen and Julius Miettinin scoring for Finland, with Sweden’s Karl Sterner responding in between those two tallies. Emil Hemming put Finland ahead 3-1 ahead of the first intermission and they led 5-2 after 40 minutes with Akseli Pulkkanen and Roope Vesterinen scoring for the Finns while Anton Olsson responded for the Swedes.

Pulkkanen (Finland) and Victor Eklund (Sweden) were the respective Players of the Game.

The US team continued to roll, tacking on another six goals – they now have 31 in five games – in a dominant 6-1 victory over Canada Black to improve to 5-0 and book a spot in Saturday’s championship final.

The Americans were ahead 2-0 after one period and 4-0 through 40 minutes with Kamil Bednarik (short-handed), Teddy Stiga, James Hagens and Lucas Van Vliet each finding the back of the net. Thomas Desruisseaux would get Canada Black on the board with just over 13 minutes to play but Brodie Ziemer and Hagens tacked on two more US goals.

“We started a little bit slow, a little sluggish, a little bit individualistic. We talked about that between periods and the second and the third we found ourselves and played much better hockey,” said American coach Nick Fohr, also pointing out the fact that they were facing a depleted Canada Black roster, which factored into the one-sided final score.

Hagens – who leads the tournament in scoring with 14 points – was named the Player of the Game, while Desruisseaux earned the honour for Canada Black.

Aldergrove Kodiaks get points, but not the win