Wednesday night in Kelowna, the Langley-based Giants (5-1) defeated the Victoria Royals by a 6-4 score.

That victory, and more specifically Miner’s time played while keeping out a goal, earned the 20-year-old Manitoban noteable accolades.

Chris Worthy (Flin Flon Bombers) holds the WHL shutout record, which spanned 265 minutes and 13 seconds which he set back in 1968.

“For as much as it is a personal record, I view it as a team record,” Miner said after the game.

“We’re giving up minimal opportunities every game. Guys are selling out, blocking shots, and giving Drew and I the best chance to win games,” referring to fellow netminder Drew Sim.

Miner didn’t come into the game until early in the second period, to relief Sim, and was spotless in 35 minutes and 30 seconds of work to extend his shutout streak to the 225 minutes and 48 seconds.

RECAP: A three point night for Justin Sourdif and Bryce Bader coupled with a record-setting performance from Trent Miner helped guide the Giants to their fifth straight win Wednesday against Victoria.

As for putting points on the board, Victoria’s Tarun Fizer and Brayden Schuurman each scored two points for Victoria. But it wasn’t enough to keep up with the Giant who put six in the Royal’s net.

Among the G-Men’s scorers were forwards Justin Sourdif and Bryce Bader each scored two goals and an assist for Vancouver and who each were named stars of the game for their efforts on the ice.

“Coming from Jr. A was a big step,” shared Bader, who’s three-point game (2G, 1A) marks the first multi-point game of his WHL career.

. “I was playing a little bit passive at the start but I’m more comfortable now and I’m starting to find the back of the net,” he added.

Other goals were scored by Giants team captain Alex Kannok Leipert, his first of the season, as well as one by returning Fort St. John forward Tristen Nielsen.

Zack Ostapchuk, a 6 ft. 2 in. forward hailing from Alberta, was credited with two assists in the first period on Wednesday night. His two-point effort marked the first multi-point game of the 18-year-old’s WHL career.

Operating in what the league has set up as a hub in Kamloops and Kelowna, five B.C. team are playing against each other in only one of the two arenas. For the Giants, that means their next game is Saturday, against Prince George at the Kamloops Sandman Centre. The puck drops at 7 p.m.

VIC – Royals leading scorer Brayden Tracey opened the scoring for Victoria at 4:53 off a rebound at the side of the Giants goal. Tarun Fizer Brayden Schuurman assisted on the goal.

VAN – Giants captain Alex Kannok Leipert responded with his first goal of the season off a give-and-go rush with Zack Ostapchuk. The time of the goal came at 11:59.

VAN – With 22.4 seconds to go in the first, Bryce Bader moved the Giants ahead when he parked himself in front of the Royals goal and tipped home a Zack Ostapchuk shot from the right-wing boards.

VIC – Brandon Cutler tied the game for Victoria off a shot from the left-wing circle at 1:05.

VIC – Brayden Schuurman got Victoria their second lead of the game at 3:19 after he snuck a low shot through Drew Sim in close off a power move from a rush off the left wing.

*At 4:30, Trent Miner replaced Drew Sim in the Giants goal.

VAN – Tristen Nielsen moved Vancouver back within a goal at 5:07 off a one-timer from the high slot. Justin Sourdif had the lone helper.

VAN – Justin Sourdif then followed up with a goal of his own at 7:43. He forced a turnover, skated in alone on Adam Evanoff and snuck his second goal of the season through the goaltender’s legs.

VAN – At 18:45 of the period, Bryce Bader buried his second goal of the game off a two-on-one rush with Adam Hall.

VAN – The game’s final goal came courtesy of Justin Sourdif on a redirect which came courtesy of a Tanner Brown point shot. Sourdif’s third of the season and second of the night came at 10:42. 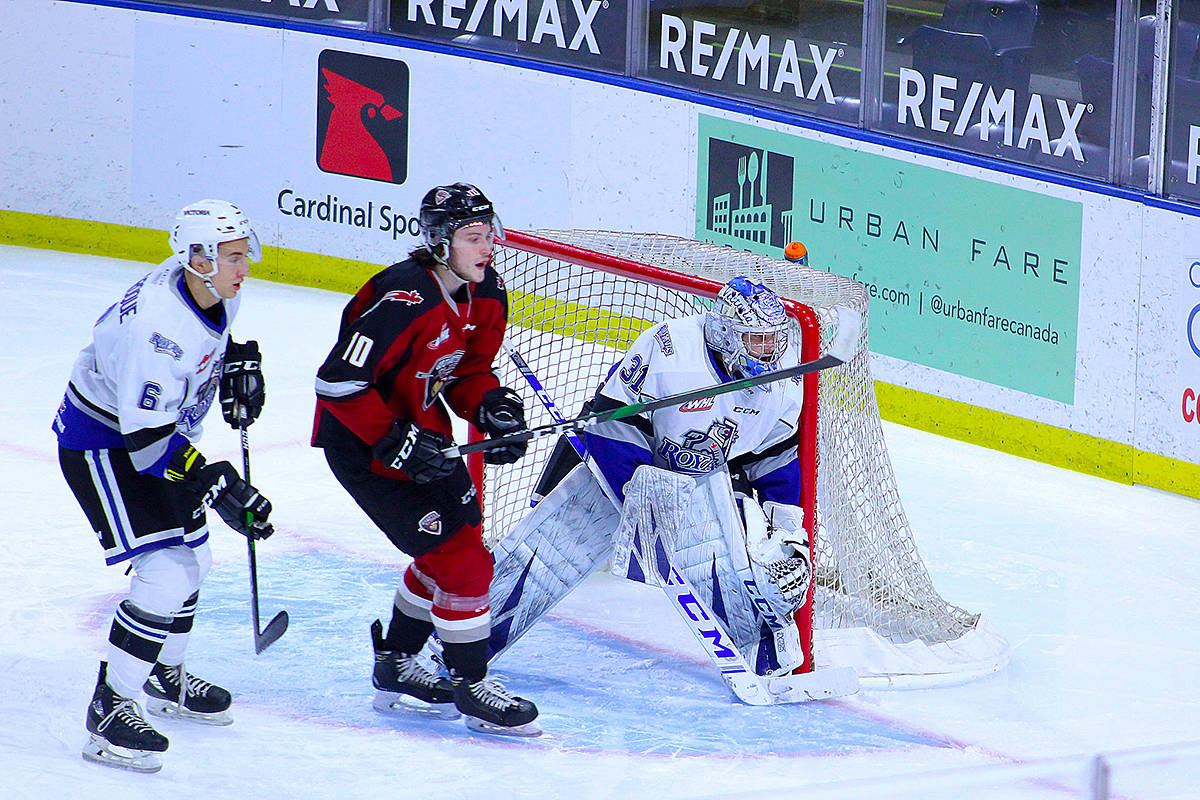 Justin Sourdif and Bryce Bader each had three points and Trent Miner now has the longest stretch of shutout hockey in franchise history for the G-Men. (Paige Bednorz/Special to Black Press Media)

NHL grapples with vaccine inequity between U.S. and Canada