Almost every Canadian of a certain age knows exactly where they were in 1972, when Paul Henderson scored the winning goal for Canada against the Russians in Game 8 of the Canada/Russia Summit Series, September 28, 1972, in Moscow.

Fifty years later, the anniversary of the legendary series that pitted the best of the NHL against the best Russian playerss will be marked in Langley, when White Spot Legends Night is hosted by the Vancouver Giants in conjunction with the Langley Events Centre and White Spot on Friday, Nov. 18.

Giants will celebrate the anniversary by wearing Team Canada jerseys that are replicas of the ones worn in the series when Vancouver plays the Kamloops Blazers.

Four members of the ‘72 Canadian team are expected to attend the game at the LEC: Yvan Cournoyer, Dennis Hull, Pete Mahovlich, and Dale Tallon. 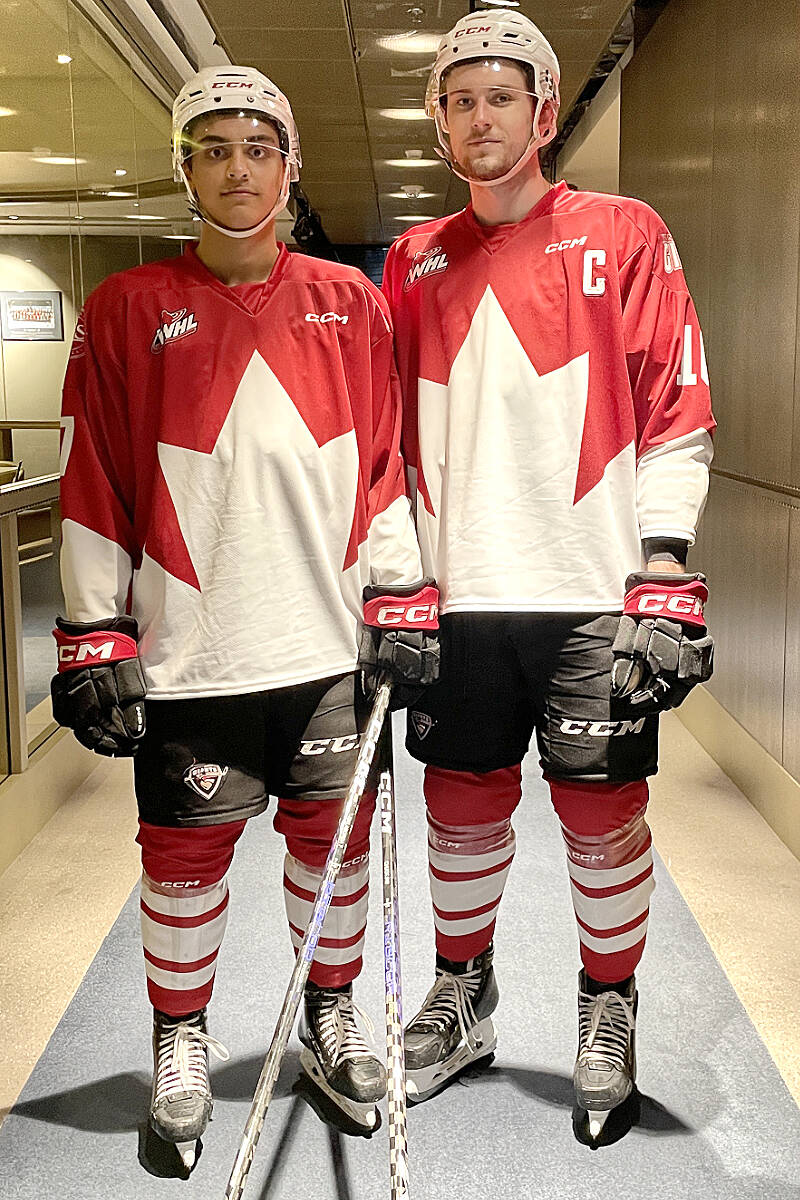 Giants Ty Halaburda and Zack Ostapchuk and the Team Canada tribute jerseys the Langley-based team will be wearing to celebrate the 50th anniversary of the 1972 Canada/Russia Summit Series. (Vancouver Giants)

“The Summit Series was a monumental event in hockey history and the team is proud to be wearing the same jerseys that were worn for that tournament.”

Giants will welcome their B.C. Division rivals, the Kamloops Blazers at 7:30 p.m. on Nov. 18 at the LEC.

White Spot Legends Night will run in unison with the Western Canada Collectibles Experience at LEC which runs Nov. 18th to the 20th.

Beginning November 27, every Sunday home game will be a Save On Foods family Sunday, which includes a free postgame skate for fans.

The Chevrolet Teddy Bear Toss kicks off Christmas season on Dec. 10. The teddy bears tossed onto the ice will be donated to the Christmas Bureau and money raised will go towards the Be a Giant Foundation.

In the new year, on Feb. 11th, it’s Prime Travel Vegas Night, where some fans will win a trip to Sin City.

Nine days later on Feb. 20th, it’s Family Day, with a matinee brought to you by Save On Foods!

On March 20th, the BC Wildlife Federation and the Giants will host “Outdoors Night.”

Saturday, March 24th, the Giants wrap up their regular season schedule with Chevrolet Fan Appreciation Night, where fans will have the chance to win an assortment of prizes.