The presence of the Memorial Cup, the CHL’s Holy Grail, at the Langley Events Centre Saturday gave the Vancouver Giants a glimpse of what it takes to reach major junior’s hockey summit.

In the end, the Giants found a way to climb past the visiting Kootenay Ice, erasing a 3-0 deficit to earn a stunning, 4-3 overtime victory.

With 18 seconds to go in a wildly entertaining three-on-three overtime period, Giants’ sniper Ty Ronning banged home his second of the night on a Vancouver power play to lift the G-Men to their third consecutive win.

Giants head coach Jason McKee said his players picked up their game considerably in a final frame that saw the G-Men outshoot the Ice 14-3 while outscoring the visitors 2-0.

“Guys were starting to win races and battles, and we were playing on our toes rather than on our heels, and that was the difference,” McKee said.

Ronning, who leads his team with 29 goals, said this wasn’t the Giants’ best game but they picked it up and took control in the third period.

“We definitely got our bounces and we capitalized on our opportunities,” Ronning said.

McKee was quick to point out that the Giants penalty kill “was outstanding.”

“The game could have gotten away from us on that four-on-three, five-on-three when it was 3-0 (for Kootenay) at the time, and our guys did a great job of holding it, there, and gave ourselves a chance,” McKee said.

From Ronning’s perspective, it was a fun night on the ice, as he finished with four points (two goals, two assists).

“It felt good,” he said. “I was playing against my best friend, Alec Baer, and it was a fun game, and very competitive and all-around exciting.”

This game was a bit of redemption for the Ice who were coming off embarrassing, 10-3 shellacking at the hands of the host Victoria Royals on Friday night.

Going in, all the ingredients were there for another Giants victory.

They were coming off an emotional, 1-0 win over the powerhouse, U.S. Division-leading Portland Winterhawks the night before in Portland. It was a game that saw goaltender David Tendeck stop all 37 shots he faced.

But the G-Men stumbled out of the gate, with the Ice’s Sebastian Streu one-timing a shot low stick side past Tendeck at the midway point of the opening period.

Then, a few minutes later, a backhander off the stick of Kootenay’s Kaeden Taphorn trickled through Tendeck’s pads to give the visitors a 2-0 lead.

Just under seven minutes into the second period, the puck somehow bounced into the net off a scramble in front. Goal-scorer Cameron Hausinger and the Ice had silenced, and stunned, the 3,356 Giants faithful, as the Ice padded their lead to three goals.

“The first two periods, we were very lethargic, we didn’t have a lot of cohesion to our game, we looked slow out there,” McKee said. “We knew it was going to be a bit of a tough turnaround, but that being said we needed to be better than we were. In the third, we were very aggressive in all situations. Full credit to the guys, they got going.”

Vancouver captain Tyler Benson gave the Giants some life at the 13:12 mark of the second period when he took a pass from Ronning before wristing a shot from the top of the leftfaceoff circle past the glove hand of Ice goaltender Duncan McGovern.

After owning the play for half the second frame and all of the third period, the Giants came within a goal when centre Brad Morrison snapped home the puck past a sprawling McGovern.

Ronning brought the fans to their feet with a beautiful wrist shot that McGovern had no way of seeing off a great screen in front to tie the game at 3-3.

It wasn’t just a couple of players who took the reins, in Ronning’s opinion. He said it was a total team effort.

“We’re definitely capitalizing on our chances and making the simple plays and just enjoying the game and playing with passion,” Ronning said.

The G-Men dominated on the shot clock, outshooting Kootenay 38-18. 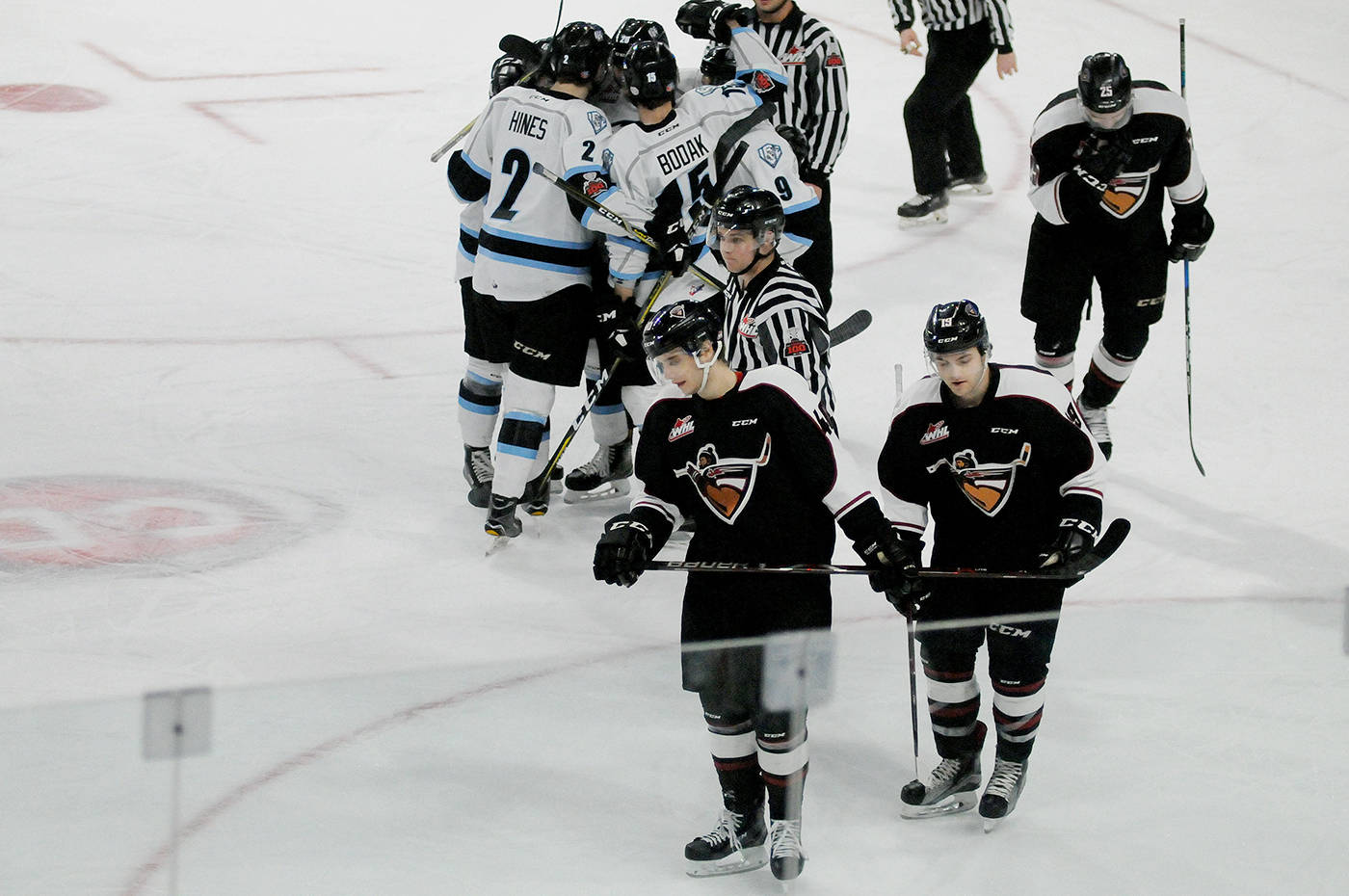 Heads down, Vancouver Giants skaters made their way to the bench as members of the Kootenay Ice celebrated their second goal of the night during Saturday’s WHL match-up at the Langley Events Centre. Troy Landreville Black Press 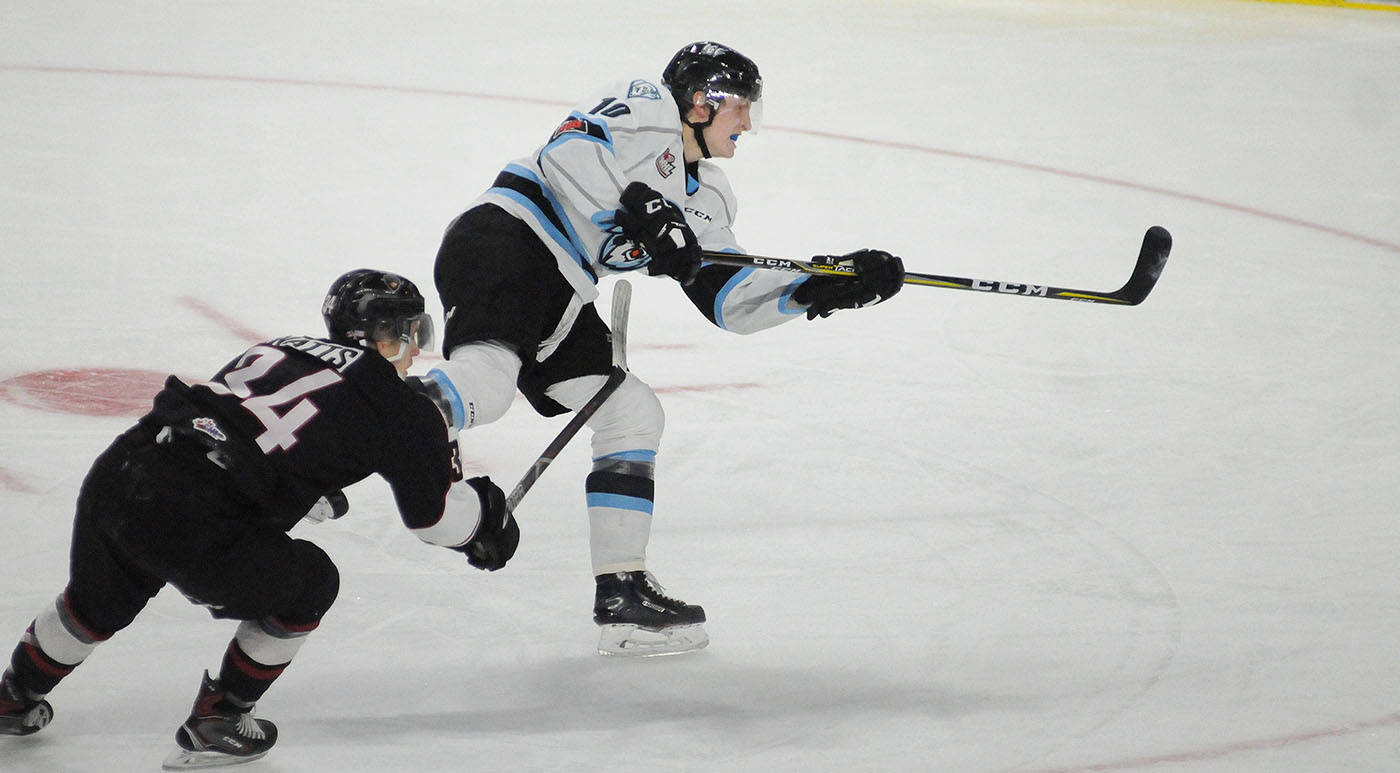 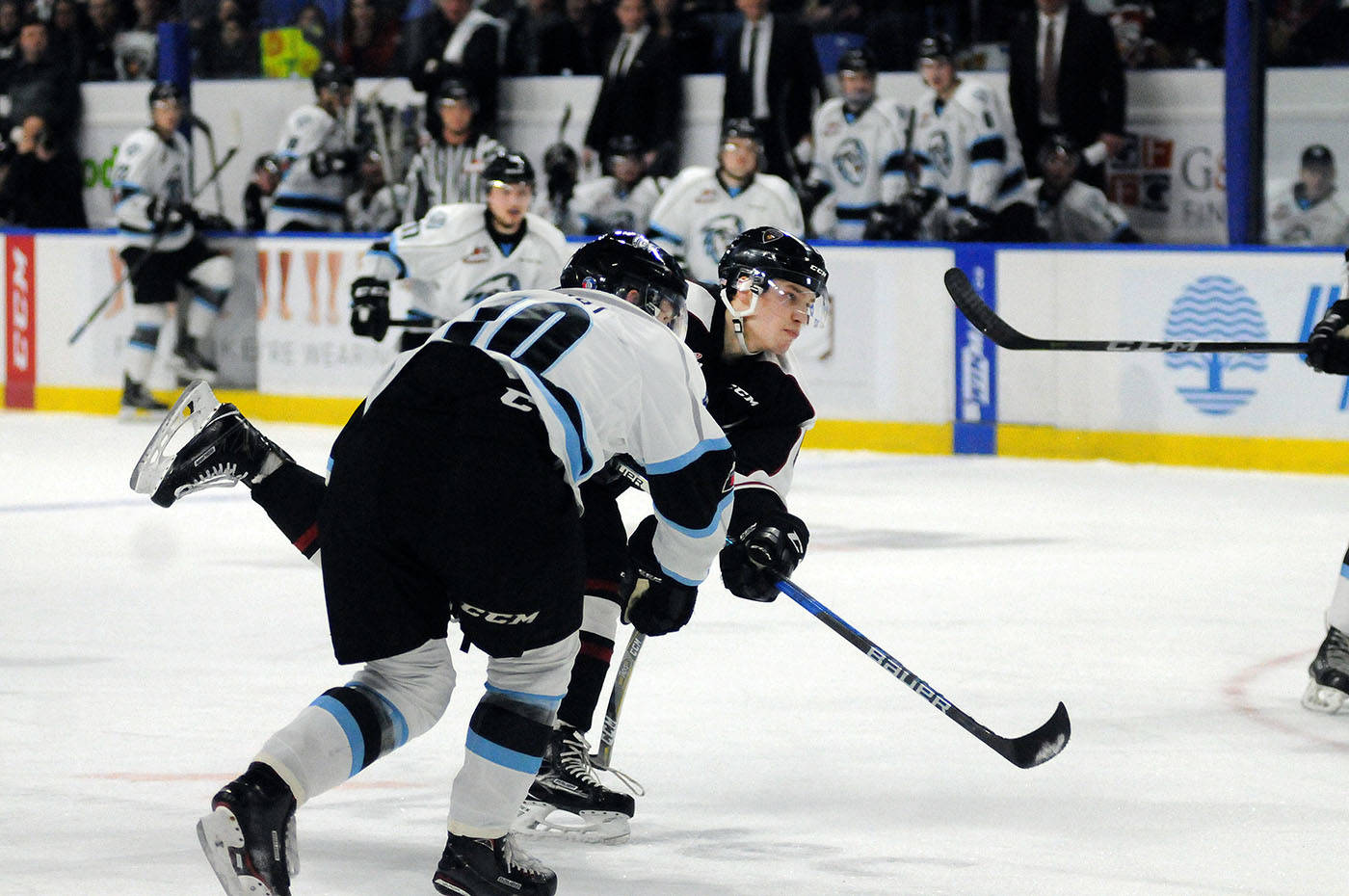 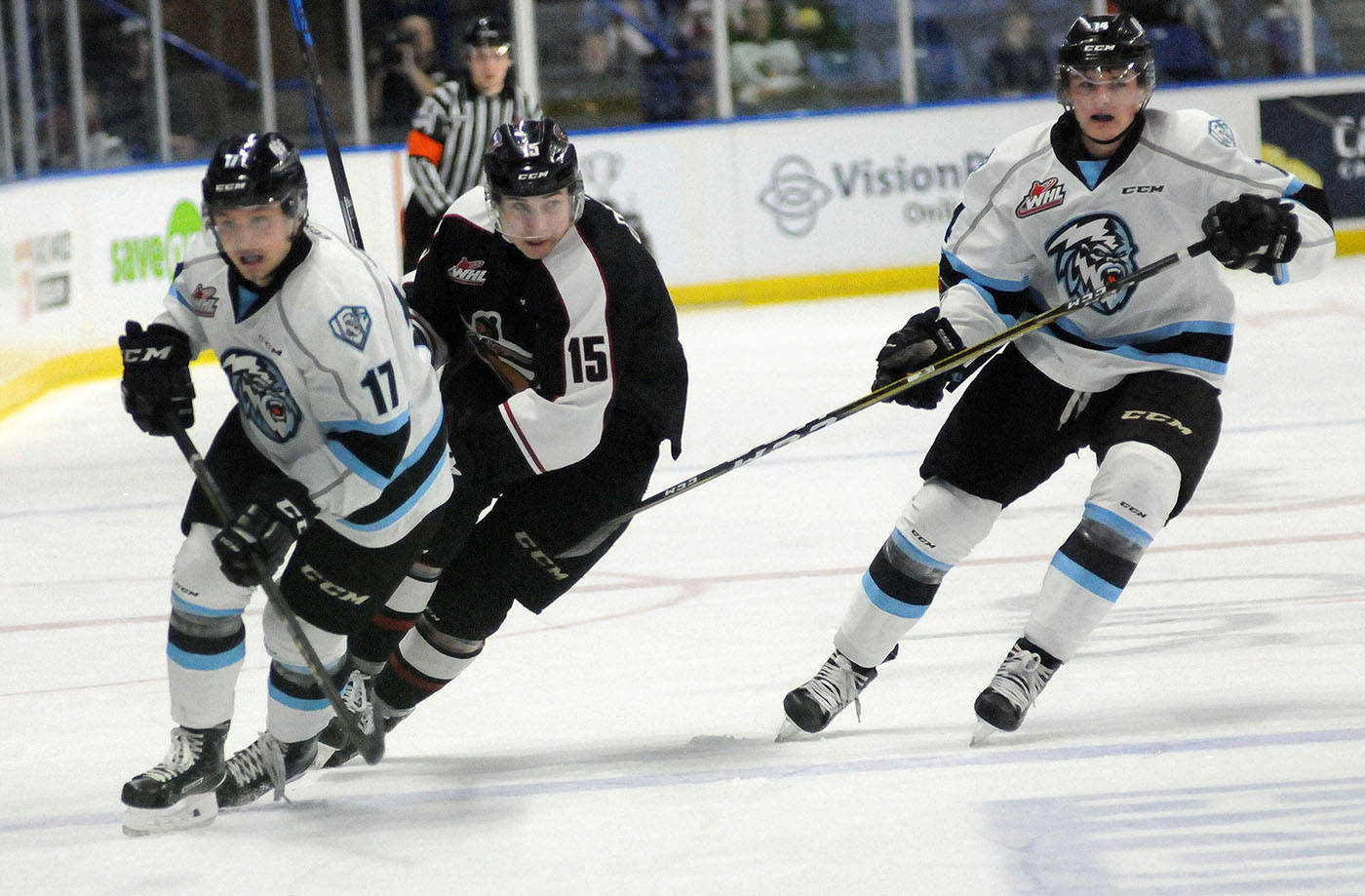