Katie Laurie (AUS) conquered her competitors and the atmosphere Saturday night, Oct. 17, in Langley at Thunderbird Show Park’s Harvest Welcome, riding McCaw MVNZ to a victory worthy of its primetime slot in the $37,000 Volvo Canada 1.45m.

The Harvest Welcome is the first FEI competition in Canada since the COVID-19 pandemic brought global competition to a temporary halt this spring. The event features more than $180,000 in prize money, including a $20,000 U25 division, and is highlighted by the $73,000 ATCO Cup CSI2* Sunday afternoon.

With both of her mounts advancing to a 10-horse jump-off, Laurie, after taking an early lead over Peter Holmes’ (CAN) shortened track with Cera Caruso, reclaimed it and ultimately secured her victory with McCaw MVNZ. The pair’s winning time was a dominant 34.03 seconds. Jim Ifko (CAN) finished second with a near-perfect round aboard Un Diamant des Forets (35.00 seconds). Laurie bookended the podium with Cera Caruso with a final time of 36.00 seconds.

“It’s been a very, very good week!” Laurie exclaimed. “My faster horse was my first one [Cera Caruso], and he was awesome. He did a very good round. I was probably a tiny bit cautious on him, and then when I went out on McCaw, he’s a young horse and he’s not done much at this level, so half in my mind I was wondering if I should just play it safe. Then he warmed up so good for the jump-off, I thought we’d give it a go. We jumped the first line and he felt good, so I was like, ‘We’ll roll on!’”

Laurie left nothing to chance in the jump-off, and it was the final line on course that pushed her ahead of Ifko. Turning swiftly back to the penultimate vertical in 10 strides—and meeting the fence at just the right angle—she visibly flapped the reins, putting all her trust in her mount, as she boldly galloped toward the final oxer. Horse and rider executed a leave-out in eight strides and continued their momentum through the timers, putting an exclamation mark on a performance that would earn them a comfortable margin of victory.

“On Cera Caruso, I did nine [strides] to the last [jump]. I asked my husband and [my good friend] Amanda [Taylor] at the gate when I was going in [with McCaw MVNZ], ‘They’ve done eight strides [there], haven’t they?’ They said yes, so I just went out there and said, ‘I’ve got to try!’ I was committed!”

The win marked the first for the 9-year-old Holsteiner gelding in FEI competition; the grey was imported to Canada earlier this year when Laurie and her husband Jackson moved to Calgary in January.

“He is pretty green at this level,” she said. “I walked the course and thought it might be a bit big for him. But he has so much try in him and is so careful, and I think he just loves it. He just gives it a go!

“He’s super competitive,” she added. “Every time he goes up a level, he just tries so hard. I think he has a really big future.” 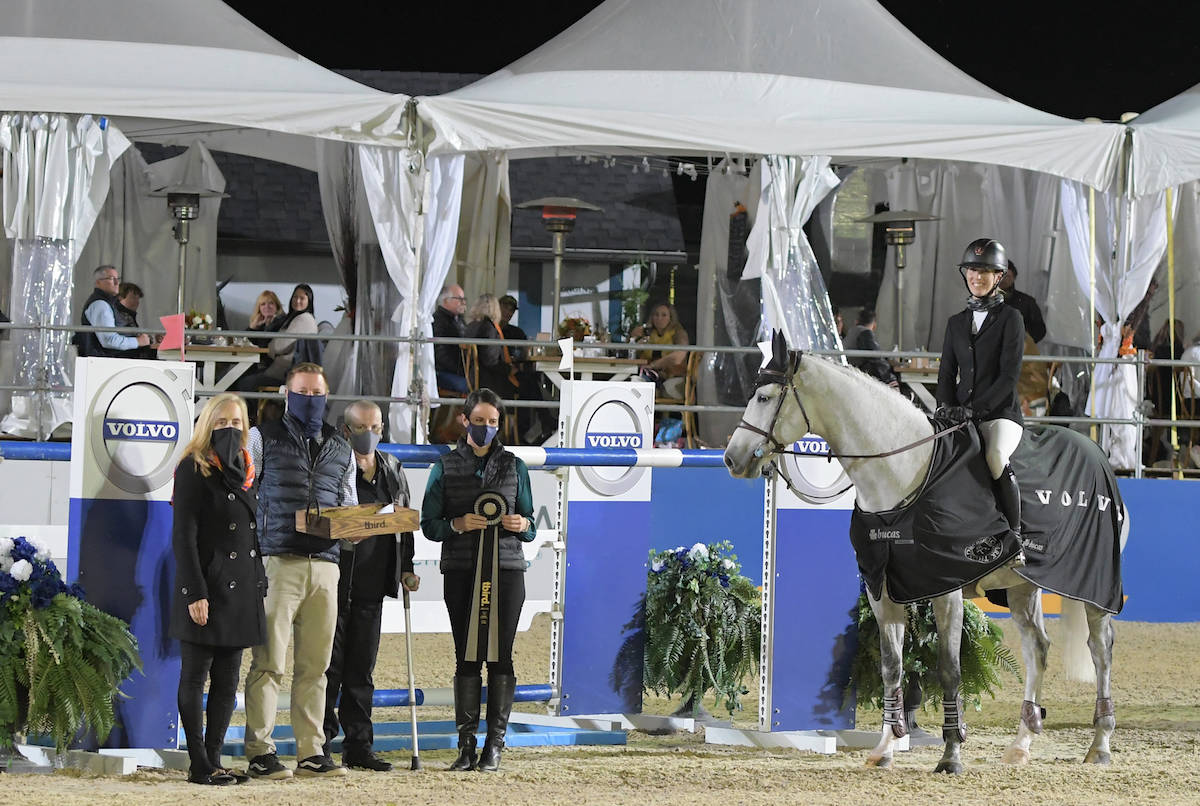