Langley’s Tiffany Foster had a determined look as she rode into the arena at Thunderbird Show Park Sunday afternoon.

It was the second round at the $400,000 Longines FEI Jumping Nations Cup, and Foster had a chance to sew it up for Team Canada by riding to a four-fault score or better.

“Just make sure you clinch it,” she told herself.

Riding Figor, a nine-year-old Dutch Warmblood gelding, Foster knocked down just one rail, which meant the rest of the Canadian team did not have to jump a second round.

A wave of cheering and applause erupted as a beaming Foster rode past the stands.

It was enough to elevate the Canadians to top spot on the podium and a champagne-drenched celebration.

At the post-awards press conference, Foster said she was conscious of the need to ride her round with as few faults as possible, but not the exact number.

“I’m not good at math, but I figured that was the situation,” Foster said.

Foster and teammates Lisa Carlsen, Nicole Walker and Mario Deslauriers, took an early lead and held it, finishing with a team total score of four faults.

Canada led the way with a score of zero at the half-way point on the strength of three clear performances in the opening round from Carlsen, Walker, and Deslauriers.

Ireland, Mexico, and the United States were tied for second on eight faults apiece while Israel trailed with 16 faults.

The clear rounds kept on coming for Canada in the second round, with lead-off rider Carlsen, 54, again jumping clear with Parette, her 13-year-old bay Brandenburg mare.

Defending champions Ireland finished second on eight faults, while the United States came in third on a score of 12.

Canadian Chef d’Equipe Mark Laskin of Langley called it a “bittersweet” victory, because Team Canada did not qualify for the Nations Cup final in Barcelona in October, missing by just 10 points.

Instead, the U.S. team clinched second place in the North and Central America and Caribbean division with 250 points, while Canada finished third with 240.

Mexico was first with 270 points.

“It’s great to win, especially on home field, but there were two parts to the equation,” Laskin said.

“The first part, we took care of. The second part, we just missed.”

For Foster, who had never won in a jumper class of any kind at tbird, the team win came just days after she ended her drought by taking the Artisan Farms Nations Welcome event on Thursday.

Canadians Carlsen and Walker, along with Ireland’s 22-year-old anchor rider, Cormac Hanley, and Richard Spooner and Eve Jobs of the United States, shared in the $80,000 bonus for any rider able to jump two clear rounds.

The win marked the first victory for a Canadian team at tbird, noted Jane Tidball, president and tournament director for Thunderbird Show Park who said she has seen tbird grow from a “horse show that used to do 250 horses” to shows with over 1,000 horses.

“It has been such a beautiful day for everybody here,” Tidball said.

“Our hearts are pounding. We love it” 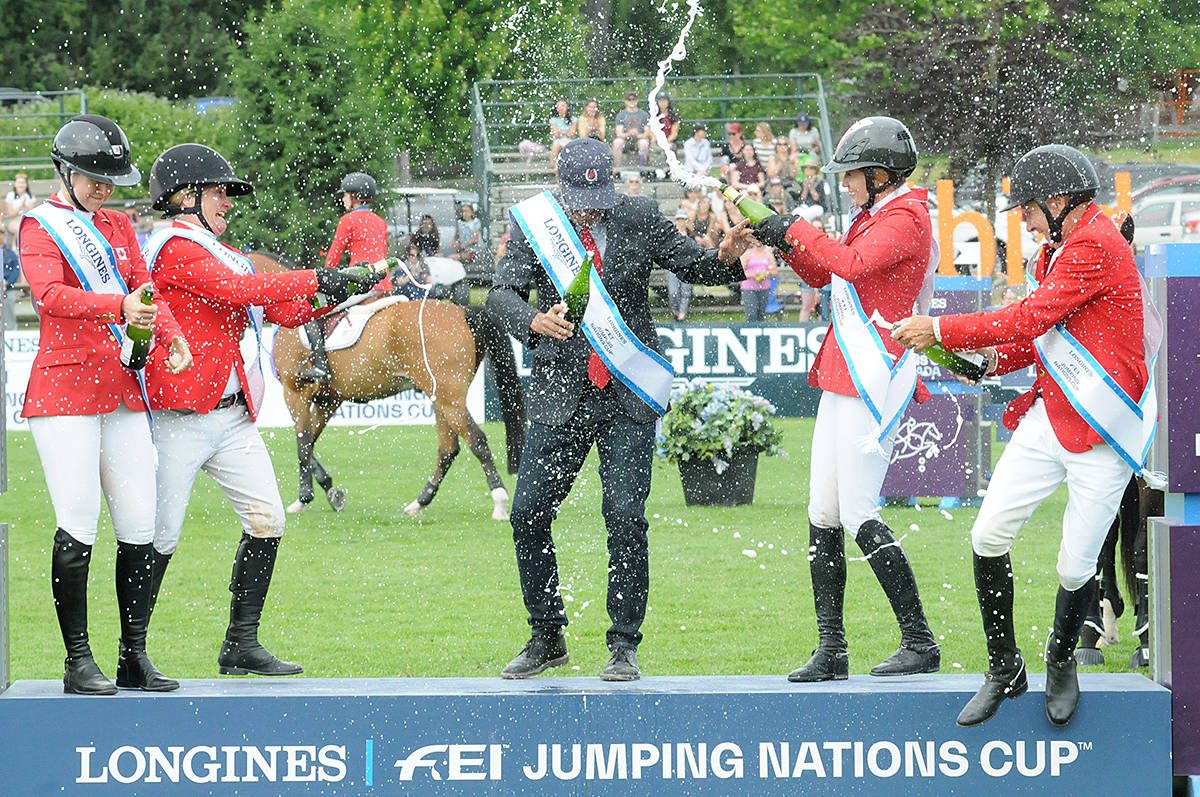 Fourth loss in a row for Junior Thunder lacrosse team