Second in a multi-feature series

This week, the Langley Advance Times shares the story of 90-year-old Lou Lessard, and all he’s survived, including the collapse of the Ironworker’s Memorial Second Narrows Bridge.

LAST WEEK’S PROFILE: Realization: A little self-love is in order

Lucien (Lou) Lessard is a survivor.

But, despite all he’s overcome in his 90 years, this Langley man describes himself as nothing more than a “normal guy.”

In his 50s he survived a broken back while body surfing in Hawaii.

Like many his age, he’s survived a bout with cancer – colon cancer to be exact, which struck 25 years ago.

In 2007, he was on life support for 10 days, and expected to suffer total organ failure after a ladder collapsed beneath him.

This past November, on his birthday, he survived what doctors described as a “significant” stroke that altered his voice, impacted his short-term memory, and weakened his left side.

But none of that has managed to slow down the Quebec-born bridge maker.

In fact, none of that compares to the most potentially catastrophic ordeal he lived through at age 29.

He suffered internal injuries, cuts, bruises, broken arm, and shattered left femur when he plunged into the Burrard Inlet as the partially built Ironworker’s Memorial Second Narrows Bridge he was working on collapsed around him on June 17, 1958.

“It was a day like any other day,” as he tells it, recalling it was a hot day. Just before 3 p.m., in his capacity as the front end foreman, he gave the order for his team of 10 men to unload 55 ton of steel that needed to be moved from a train car to position on the bridge deck.

It was rather late into the day to undertake such a project. And, Lessard knew it meant it was going to be a long, gruelling afternoon and evening – as once they started the unload, they had to complete it. Nevertheless, they’d opted to power through.

Then suddenly, in the midst of the unload, the west side of the bridge came crashing down – literally plunging everyone and everything into the water below.

Lessard remembers working one moment and falling the next.

He fell close to 150 feet to the water below, then torpedoed another 35 feet below the water’s surface.

He and other workers were wearing life jackets, but he hit the water with such force that it was ripped off on impact.

“I was lucky. I was at the edge of the bridge, I fell free from the wreckage. Otherwise, I would have been dead, too,” Lessard shared.

“That probably saved my life,” he said, noting that in his post on top of the bridge, where they were laying the beam, there was nothing overhead that could fall on him when everything started collapsing.

Many of his friends and coworkers were not so lucky. Eighteen of the bridge crew lost their life that day, plus a recovery diver perished later. Dozens of other workers were injured.

That ordeal was 61 years ago, but the experience is still as vivid in Lessard’s memory today, as it was back then.

As he was blasted to the ocean floor, he remembers thinking how dark it was and wondering how he’d ever make it back to the surface.

All the construction debris that had fallen in around him had kicked up massive sediment from the ocean floor, and made visibility virtually impossible.

His broken leg was like an anchor, holding him down. Lessard remembers feeling thankful he wasn’t wearing the typical 50-pound tool belt to further weigh him down.

Suddenly, Lessard recalled seeing a small sliver of sunlight. Using his good leg, he pushed off the bottom and propelled himself towards that light and the water’s surface, using his one good arm to paddle upward.

Head finally above water, he was aghast by what he saw.

Death and horror around him

“I could see all sorts of men screaming and crying for their life,” he said, noting others were buried under steel, and more floating dead on the surface.

Lessard just kept thinking he needed to survive – he had a young child at home depending on him.

He cast around with his one usable arm for some broken pieces of wooden that were bobbing along the water. If he could shove one under each armpit, they could work as flotation devices, he thought.

“I grabbed a couple planks and saved myself and when I looked around, I see what has happened, with all those guys there, bleeding, getting hurt, bodies floating on the water, and the whole bridge down, partly underneath the water.”

He’s not sure how long he was floating amid the debris and carnage, but at some point he was picked up by a boat and taken to the dock where off-duty firefighters jumped to his aid.

They hoisted him on a stretcher, loaded him in the back of their pickup truck, and raced him to the Lions Gate Hospital.

“They were going to cut my leg off,” Lessard remembered the doctors saying as he convulsed in shock and cold as his clothes were cut off his body and the medical staff began to work.

Thankfully, the leg – although shattered – did not have to be removed. A stainless steel pin (which he still has today – just not in his body, but rather on his dresser in his bedroom) did have to be injected and he was put in traction for three months to mend the femur.

After a total of four months in hospital – including some intense physiotherapy – and a few weeks of convalescing, Lessard was back at work – albeit on crutches and given limited duties – helping rebuild that very same bridge that almost claimed his life.

Asked if he was scared to return to work building bridges – and especially that one – Lessard was adamant he was not.

Back to work four months later

Despite such a close brush with death, he had full confidence in the engineers and was convinced the problem had been resolved.

“That accident didn’t bother me at all. I went right back to work,” he said, noting that he attends the special memorial service every year to remember his fallen coworkers and comrades.

“We promised those guys that we were never going to forget about them. We are always going to remember them and their families, for the sacrifices that they did. That is important to me. We made a promise,” he said.

Scaling steel beams hundreds of feet above the rest of the world was where Lessard always felt comfortable.

Oldest of nine siblings, he started out working as a millwright. It wasn’t until he was 21 and watching some men climbing around on the steel beams of a mall under construction near his work that he realized this was really what he wanted to do with his life.

That career choice ultimately brought him west, to B.C. where he went on to work for another 40 years building more bridges, as well as schools, pulp mills, mines, towers, and even the first gondola at Grouse Mountain.

“I was good in the air,” said the Quebec-born man, who insists he never regretted his career path or his decision to go back after the accident.

He believes it’s working outdoors all those years that kept him so fit and healthy. As recent as three years ago, he was still downhill skiing.

Even now, he spends hours outside each day – rain or shine – working around the acreage he shares with his daughter, Christine.

In fact, as summer rolls in, much of his day is spent tending a huge vegetable garden that takes up hundreds of square feet in his backyard.

When not “puttering” outside, or playing bridge twice a week at the seniors centre, at least 20 to 30 minutes of every day is spent working out in his spare bedroom that’s been transformed into a joint workout room and workshop.

He demonstrates his daily routine that includes lifting weights, doing squats, and working his arms and upper torso with rubber bands and springs, showing more agility and flexibility than a man half his age.

“I’ve always been busy,” Lessard said, crediting his longevity to that and a 3 p.m. glass of Merlot shared every day with his daughter.

“You have to do something,” he added matter-of-factly. “You can’t sit on your butt watching TV.”

Lessard not only survived all that has been thrown his way, but he insists its all he’s endured through his lifetime that has allowed him to be where he is today, enjoying the great life he has as a father to six and grandfather and great-grandfather to 43.

• Stay tuned for another story next Friday… 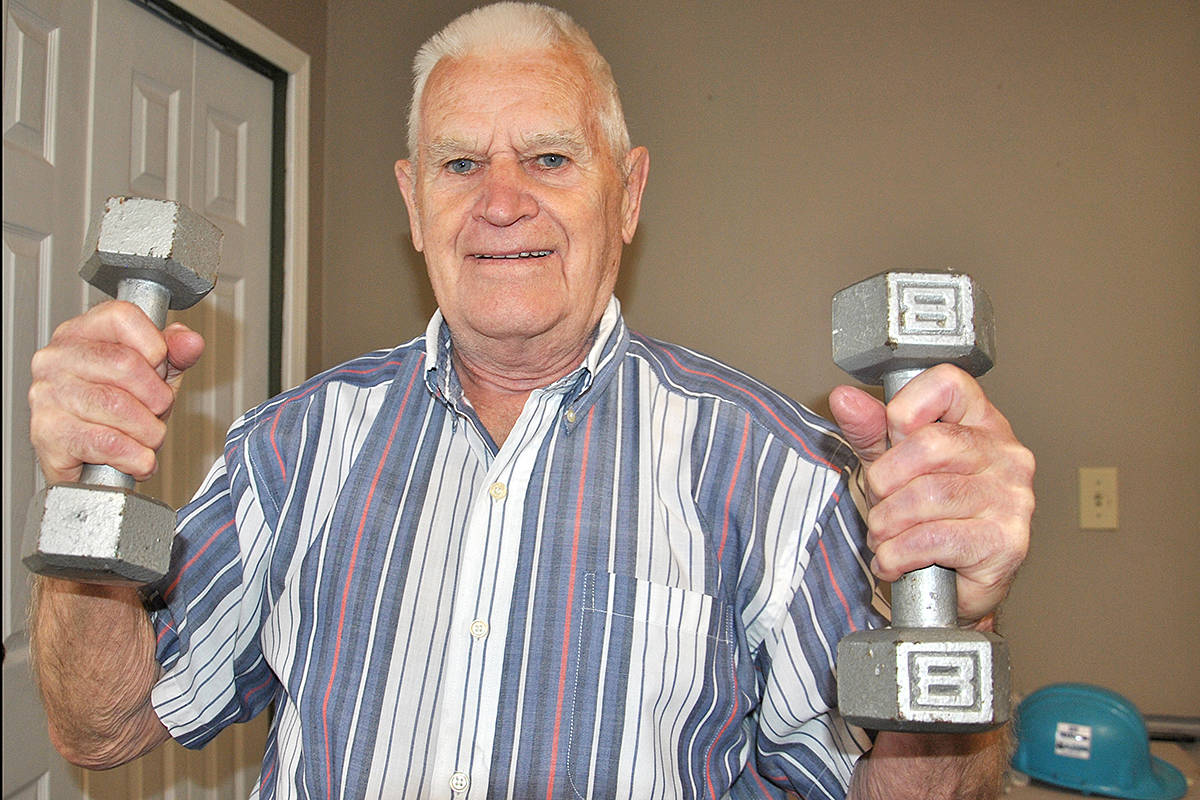 Lou Lessard has a basement suite in his daughter’s home in Langley, where he tends a huge vegetable garden, works maintaining the acreage, and has his spare bedroom converted to a workshop that doubles as a workout room for his daily workouts. (Roxanne Hooper/Langley Advance Times) 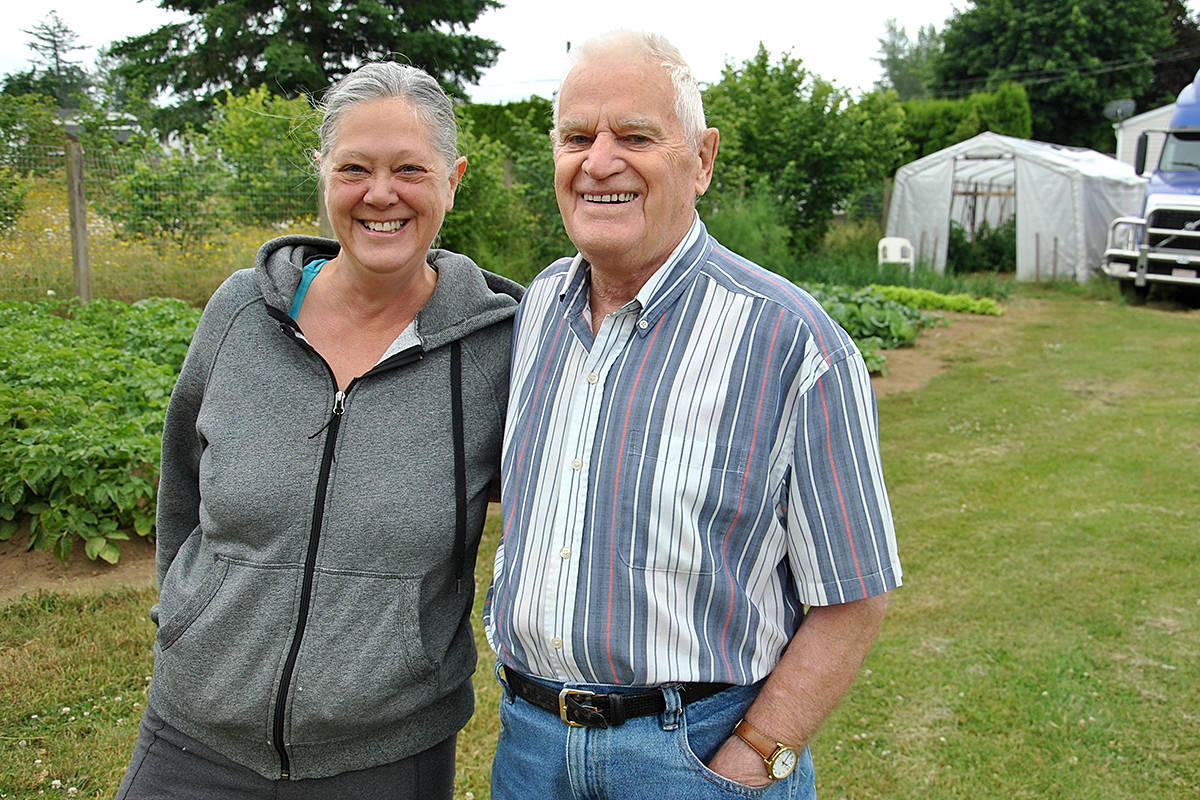 Daily, Lou Lessard and his daughter Christine Rzepka share a glass of wine and update each other on their day. (Roxanne Hooper/Langley Advance Times) 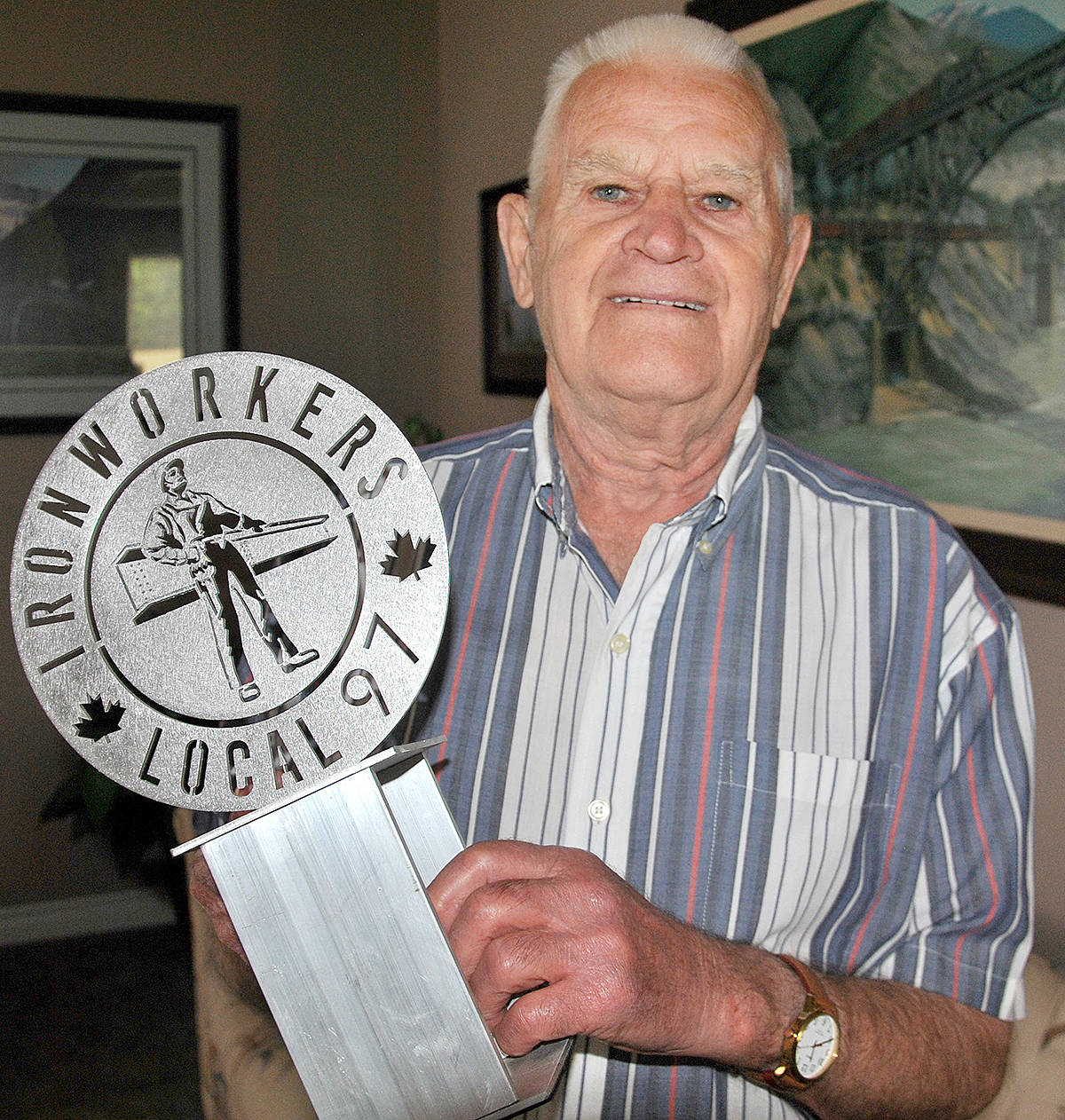