From the woman who arranged shutting down of Aldergrove’s main street on Saturday, there’s a few words of advice.

First, if you’re not going to attend Langley Good Times Cruise In, completely avoid the downtown core that day.

For those wanting to take in the annual charity car show and an estimated 1,200 to 1,500 custom, classic, and vintage vehicles – Cruise-In director Holly Trytko recommends you get there early to get parking.

Noting that Fraser Highway will once again be closed from 264th to 272nd Streets for the full day, she recommends those driving in still come in along Fraser Highway, and follow the directions of traffic staff to one of the designated paid parking lots situated around the core.

RELATED: Jimmy Shine will be back in-person at the Langley Good Times Cruise-In

By shutting down the traffic lights at these main intersections, traffic control people will take over responsibility for directing motorists and preventing some of the bottlenecks that arose in past, explained Trytko, who started in the industry as a traffic control person 17 years ago and now works as a planner for Triumph Traffic.

She’s been part of Cruise-In for the past six years, and explained that most of her duties happen months ahead of the show: getting necessary road closure permissions, arranging for traffic detours, and connecting with agencies such as TransLink and Coast Mountain to reroute buses.

While Trytko is organizing the flow of traffic, Cruise-In president Riccardo Sestito and others on the Cruise-In board are still working out the kinks for this year’s event parking.

“It’s down to the wire,” Sestito said.

Aldergrove Community Secondary’s parking lot will again serve as the early-morning staging area for registered cars – where they marshal before being moved into place along the main drag.

When all the display vehicles are moved into their spots at about 10 to 10:30 a.m., Sestito said that parking lot will be turned over to the school. They will then allow public parking by donation to the school’s dry grad effort.

Public parking is also being coordinated at Betty Gilbert Elementary, and Sestito said handicap parking and some public parking may be arranged at the Royal Canadian Legion and a few of the area churches.

While it’s expected all of this will be paid parking, Sestito was emphatic that any money raised – in keeping with the Cruise-In objectives – must go to charity.

Vendor and merchant parking has been set up at Phil Jackman Park.

READ MORE: Popular burger chain is literally in and out of Canada just for Langley’s car show

Otherwise, he said, spectators are expected to fill up much of the on-street parking around the core, but he advises motorists to abide by the signs to prevent being towed.

“There’s still a few bugs to iron out, but I think we’ve managed to address some of the key concerns that came up last year,” Sestito said, noting just days ahead of the show that he was still trying to find a charity that could possibly offer shuttle service in and out of the site as a fundraiser.

If it can’t be arranged for this year, then he hopes to arrange the shuttling for the 2023 show.

There’s a lot of moving parts when organizing an event the magnitude of Langley Good Times Cruise-In, he acknowledged.

It literally attracts tens of thousands of spectators, plus more than a thousand vehicle owners for a one-day annual charity car show on the downtown streets of Aldergrove.

But one of the largest tasks of all – which has to be arranged in minute detail and involves approvals from multiple levels of government – is literally the comings and goings for this year’s car show for Saturday, Sept. 10.

One of the biggest hiccups last year was traffic flow, Sestito admitted.

Therefore, this year several changes were made to help ease the flow of people and cars getting in and out of the show.

He’s hoping visitors to the show, registrants and spectators alike, will notice a significant improvement. 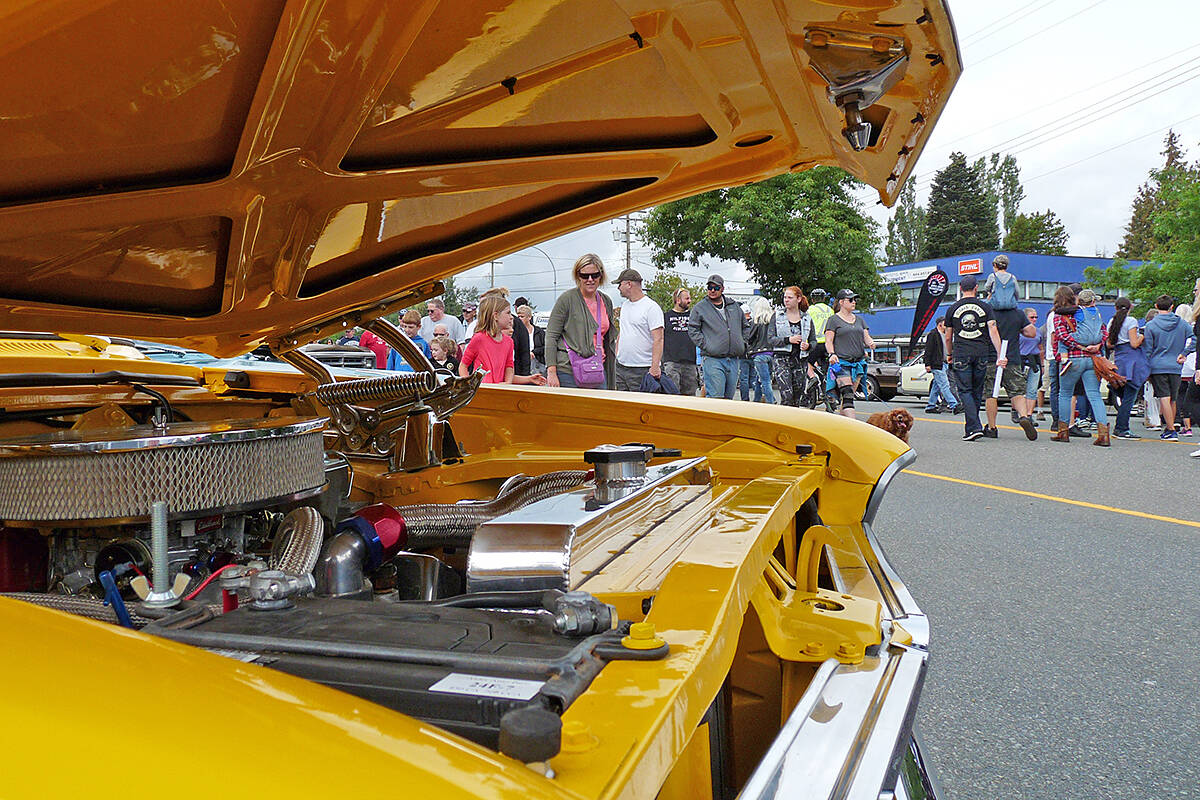 Huge crowds of cars and people are once again expected at the 2022 Cruise-In on Sept. 10 in Aldergrove. (Black Press Media files)