This Christmas is a little harder than many in past for Mike Hunniford, who recently lost his surrogate grandmother and best friend to cancer.

But, nevertheless, the recovering alcoholic is anxious to share just a sampling of the support that she and others have showed hime in the past eight years – helping him move off the streets and helping him to get and remain sober.

The 70-year-old woman, who was in the (Alcoholics Anonymous) program for some 20 years. She pulled Hunniford out of the bushes in front of the Starbucks on Fraser Highway eight years back.

“She found me and took me home,” Hunniford explained.

He was a drunk and homeless at the time and likely facing an imminent death sentence if he didn’t change his ways.

His “angel” was instrumental in helping Hunniford find the assistance he needed to turn his life around, including offering friendship when few others would.

She also introduced him to a veteran Langley outreach worker Fraser Holland, who was an invaluable resource for Hunniford get him connected with housing and many other support services.

“There’s some good people in this community,” Hunniford said.

He remained close friends with his “angel” until her recent death.

“Christmas without her is hard,” he said.

Today, to honour her, he paints pictures every day in downtown Langley City.

But still, every day during the last seven months, rain or shine, Hunniford has been found with his makeshift artists easel, bottles of acrylic paints, and a shopping cart full of canvases and other painting supplies – camped out at the entrance to McBurney Plaza.

He’s there sharing smiles, chatting with passersby, and giving away smiles and his art to those who seem truly interested.

“It fills me with joy and love,” he said of his painting.

“And I give them away… I give them to people who like them and enjoy them, and will hang them up. They have to hang them up, that’s one of the rules,” he added with a coy smile.

Hunniford is easy to pick out in the crowd at McBurney. A cross tattooed on his cheek and smile on his face, he’s typically the guy at the side or in front of the McBurney Coffee & Tea House with his paint splattered and well-worn leather jacket.

Even though this Christmas season has been harder than most for Hunniford, a recent gesture from an anonymous person reassured him there is still great kindness in the world.

This most recent “sweet gesture” came in the shape of a gift box that was mysteriously left next to his easel last week.

Inside, he discovered a care package complete with soup, muffins, some other baked goods, and one of the best gifts he could ever ask for – more paint supplies.

“It helps me out,” he said, anxious to say thanks for these and all the other gifts – tangible and non-tangible – that he’s received through the years.

He considers himself among the fortunate. He’s lost many friends to alcohol, drugs, and life on the street.

And Hunniford hopes he can offer just a smidgen of the support he’s received through the years – be it becoming a friendly ear to talk to for people living with mental illness, addiction, or homelessness, or whether it’s offering hope and advise to loved ones who struggle as they watch family member or friends dealing with the same.

It’s about education and compassion, he said. Often the disenfranchised are at or near an all-time low in their life, but they are still fellow human beings – they’re still someone’s father or mother, brother or sister, husband or wife, grandchild or spouse, Hunniford said, and people simply have to tap into their humanity.

“We have to care and love them, please,” he said. “Remember that at this time of the year, and all year around.” 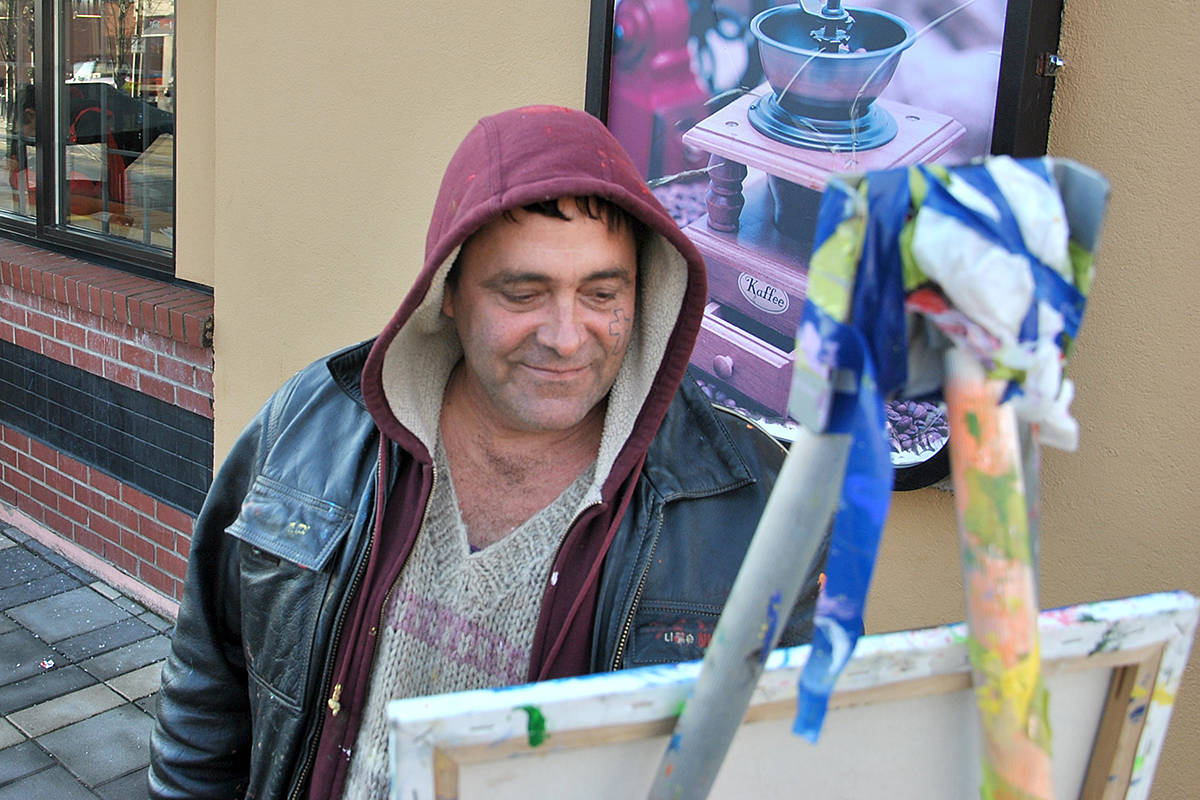 It seems apropos that aspiring artist Mike Hunniford’s business card is nothing more than a coffee sleeve with his name and number penned across it. (Roxanne Hooper/Langley Advance)

PART I: How Prince Rupert schools teach Indigenous language to hundreds of students

Unofficial holidays: Here’s what people are celebrating for the week of Sept. 27 to Oct. 3

LETTER: Wearing masks is not an assault on people’s freedoms

COVID: Langley writer feels covering your mouth and nose for the sake of others is not a lot to ask

The new MRI magnet was lifted into place on Wednesday

Group, focused on conservation and education, meet on the third Thursday of each month