With Halloween just around the corner, local carving expert Bruce Waugh wants to see Langley’s best pumpkin designs. From the creepy to the creative, Waugh will be judging pictures sent in of people’s carvings, which can be submitted to the Langley Advance Times.

Waugh, a 58-year-old Langley City resident, certainly knows a think or two about making art out of the big orange gourds – something he undertakes every fall.

“It’s a hobby blown out of proportion,” Waugh said about his designs. “It started out small and cutesy, and now it consumes me.”

Starting in 1988, Waugh competed in sand-sculpting competitions in White Rock and Harrison Hot Springs, a lark that lead him to the world of pumpkin carving. Under some mentorship and after a lot of practise, the size of the pumpkins Waugh tackled began to increase.

“It came very naturally to me,” Waugh recounted, rounding out his repertoire with snow sculpting at Grouse Mountain. “I’m very lucky, I can’t quite make a living at it yet, but now I get to travel around doing it.”

From freaky and famous faces, to animals (such as owls and squirrels) and creatures from his own imagination, Waugh’s work has appeared throughout the Lower Mainland and beyond, including Metrotown Mall in Burnaby and VanDusen Botanical Garden’s annual Halloween attraction.

Waugh says there are a few tricks to the trade that he’s picked up over the years to be able to create such unique shapes.

“You want to start with a pumpkin that has thick flesh. Atlantic Giants grown in Nova Scotia are bred bigger,” he said.“That’s what I typically use because you get three- to four-inch thick skin for deep relief.”

Once the pumpkin’s picked, inspiration is what’s needed to make the right monster.

“I do a lot of looking around and get inspiration from Halloween masks – scary eyes and teeth,” Waugh said, suggesting carvers roughly sketch out their idea with black marker. “I’ve been doing it so long, I can sculpt right off the bat without marking, but that comes with time.”

For clearing away the innards, the inside scoop to carving the perfect pumpkin is that the top might not be the best place to start.

“Lot’s of people don’t open the top, they cut the backside of the pumpkin for easier access and to get a light in properly so there’s no cord hanging out if you’re using an LED light,” Waugh added.

An arsenal of tools is imperative, Waugh noted, suggesting every carver have a grater, a paring knife, multiple-sized ribbon tools, and even melon ballers to slice away and clear out the inside guts.

A V-groove tool is also a slick and more controlled way at shaving off pumpkin pieces, one bit at a time – all of which Waugh said are sold, and often packaged together, in most hardware stores.

“There’s no real magic to it – carve away,” he added. “When it comes Jack-o’-lanterns and people are just cutting holes, really, and the biggest error might be cutting a little further or accidentally making one eye bigger – but the ‘mistakes’ are what makes the pumpkin more original or creepy.”

The winner, a Langley Advance Times reader, will win free admission for four to Aldor Acres Family Farm and pick of a pumpkin from their vast patch.

Pictures of people’s pumpkins, plus a contact name, email, and phone number can be sent to entertainment@langleyadvancetimes.com or as a message on the Langley Advance Times Facebook page.

Deadline for submissions is midnight on Monday, Oct. 21.

Winners must be from Langley and be okay with being photographed for a follow-up story. No Black Press Media staff or their family are eligible. 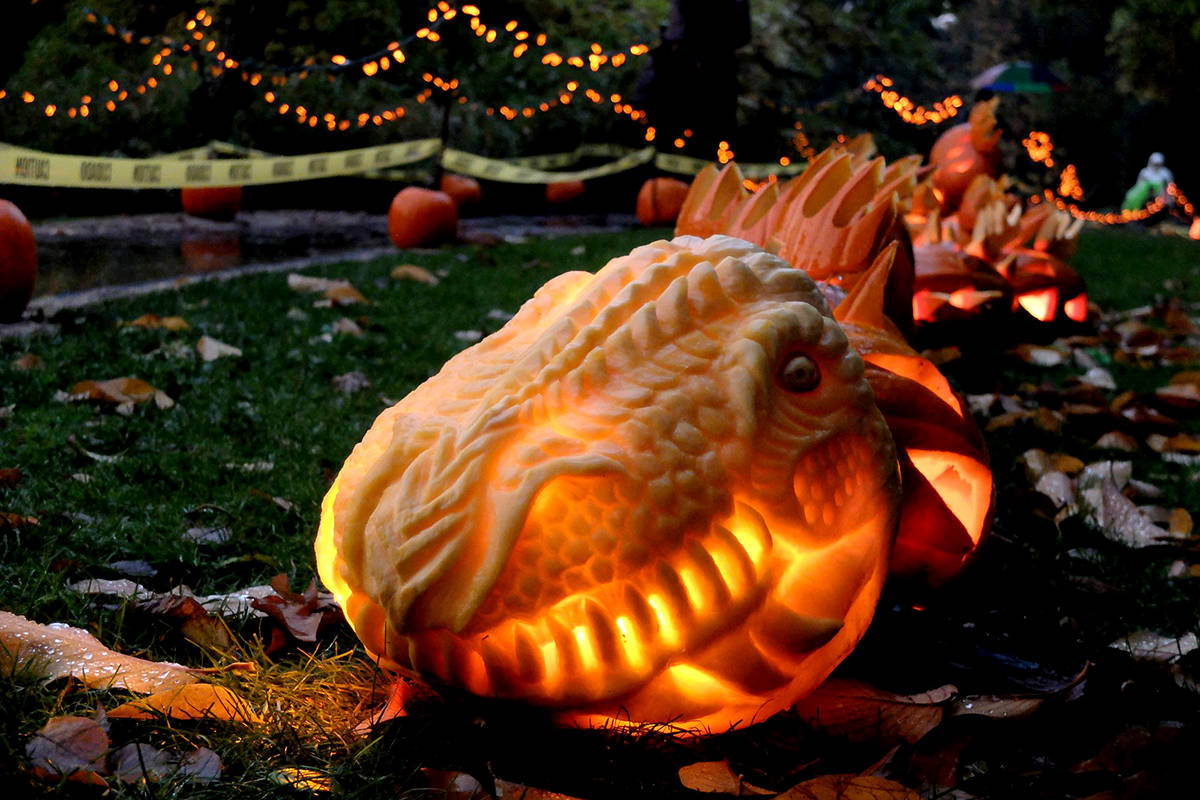 ON COOKING: Embrace the experience, from beginning to end