One day is simply not enough! In fact, neither was one-and a half. So, why not make it even bigger?

Following up on the success and feedback from the inaugural day-and-a-half-long Fort Langley Jazz & Arts Festival, organizers have expanded the event to span three days, and added more music, more art, and more for children to do.

Established in 2018, this festival drew thousands of residents and visitors to the streets of Fort Langley during the last weekend in July.

Following the first-time event, festival-goers asked to have more music on stage, they wanted the festival to extend into the evening hours, there was a call for more headliners, and multiple requests came in for food trucks, explained Karen Zukas, the festival’s executive director.

“Based on that feedback, we’re going to do all of that,” she said. “This is a community festival put on for the community, by the community… We’re really responding to what we heard from the community… It’s important to listen to what people want. That’s how we learn, improve, and grow.”

In response, this year there are now two full days (up from one day) of free, non-stop jazz (with 25 different jazz acts) on alternating stages outside the community hall from 10 a.m. to 6:30 p.m. on both Saturday and Sunday, July 27 and 28.

The event will feature some of the biggest names from the Vancouver jazz music scene and up-and-comers, a blend that the artistic director Dave Quinn said is fundamental to the festival.

“Festival attendees won’t be disappointed with the world-class level of entertainment they’ll be able to see, hear, and enjoy at the 2019 festival,” Quinn said.

“Our goal is to present a quality lineup of jazz acts from seasoned professionals to emerging talent that people will say, wow, I discovered some new music that I love, saw some of my favourite bands and learned a lot about how diverse jazz music can be,” Quinn said.

Saturday’s festivities will once again kick off at 9:30 a.m. with a Mardi-Gras-style strolling parade from the Fort Langley Farmers Market to the community hall stage, where comments from dignitaries will quickly segue into two days full of music.

“Anywhere someone goes in Fort Langley, they should expect to hear live jazz music,” Zukas said, noting there are also three ticketed events incorporated this year, compared to just one last year.

This time out, there’s still a Saturday night dance – that like last year is expected to sell out. This year it is a big band Frank Sinatra tribute dance, again being held at the community hall.

But there’s also two other ticketed events sandwiching the festival.

There’s a new all-star blues show, emceed by Vancouver’s ambassador of blues Jim Byrnes. This show is seen as the kick-off to the jazz and arts weekend.

The Blues Show will be hosted inside the Fort Langley National Historic site (which can hold about 600 people) on the Friday night, Zukas said. She noted that if the blues event is as successful as she expects, they may grow the show and move it out into the fort’s orchard to accommodate more concert-goers in future.

“It will be an amazing show in a very special venue,” Quinn added. “We’ll have the best of the best blues musicians playing inside the walls of the historic Fort, which has a natural amphitheatre and is beautifully lit at night. It will be magical and something that you don’t want to miss.”

Then, from 9 p.m. through midnight on the Friday night, five restaurants in the heart of the village will also be holding what’s dubbed the JazzFest AfterParty, where “people can continue on the party,” to a mix of jazz and blues styled musicians, Zukas explained.

Wrapping up the festivities, on Sunday night, is the third ticketed event.

Also on tap, there will be a number of young and emerging artists again performing throughout the village on Saturday and Sunday, in what’s being calling eight pop-up stages.

And alongside the music, this year’s festival will include a Kidz Family Zone featuring a variety of interactive art-themed music workshops, entertainment and demonstrations, a jazz-themed art exhibit presented by the Langley Arts Council, a jazz education workshop for youth and emerging artists, and history of jazz presentations outside the Langley Centennial Museum.

“We’re really excited to expand the festival for families wanting to bring the entire family down to enjoy the music, art, and so much more,” Zukas said.

For instance, on Sunday morning, at the kids area, the Fort Langley Lions will be hosting a pancake breakfast from 8 to 10 a.m., while the Langley Ukulele Ensemble perform.

And back again this year is the arts component of the jazz and arts festival, Zukas boasted.

“Many people tell us they come to Fort Langley for the jazz, and enjoy the art as a bonus,” she said.

The newly formed Art Fort Langley group will return with its self-guided art walk that takes people to 13 different stops in the village on Saturday.

Plus, the arts council is also kicking off its All That Jazz exhibit on the top floor of the community hall on Saturday, from 11 a.m. to 3 p.m.

Their exhibit will subsequently be moved to the council’s new digs in Aldergrove’s Kinsmen Centre – following the festival – where it will remain on display for another six weeks.

PAST COVERAGE: Organizers of first Fort Langley jazz fest are already planning another

“This is a community that loves music, the arts, and culture, and we are thrilled that the Fort Langley Jazz & Arts Festival is returning this summer,” said Township of Langley Mayor Jack Froese.

“Last year’s inaugural event was a huge success that was enjoyed by visitors of all ages, who had the opportunity to enjoy free, family-oriented fun and world-class entertainment on a summer’s day, all within the unique setting of Fort Langley. This year’s festival promises to be even bigger and better, and we look forward to seeing – and hearing – everything the organizers, performers, and artists have in store,” he said.

Peter Tulumello, the Township’s arts and culture director, said he was “impressed” by the lineup of seasoned professionals and “rising stars” performing at this year’s event.

“The festival organizers have taken this event from sapling to full grown maple tree in just under two years and are now positioned to becoming one of the province’s premier music festivals,” Tulumello suggested.

“Fort Langley, the Birthplace of British Columbia, once considered a potential capital city for the province is now staking its claim as the Cultural Capital of BC. The Fort Langley Jazz & Arts Festival is a cornerstone among community events helping the village gain province-wide recognition as the place to come enjoy arts, culture and heritage.”

Given word of mouth, and the expansion of this year’s festival days and lineups, organizers are expecting an even larger crowd will converge on the village this summer.

To make it all possible and to ensure the success of the three-day event, organizers are going to need the help of hundreds of volunteer, Zukas said. 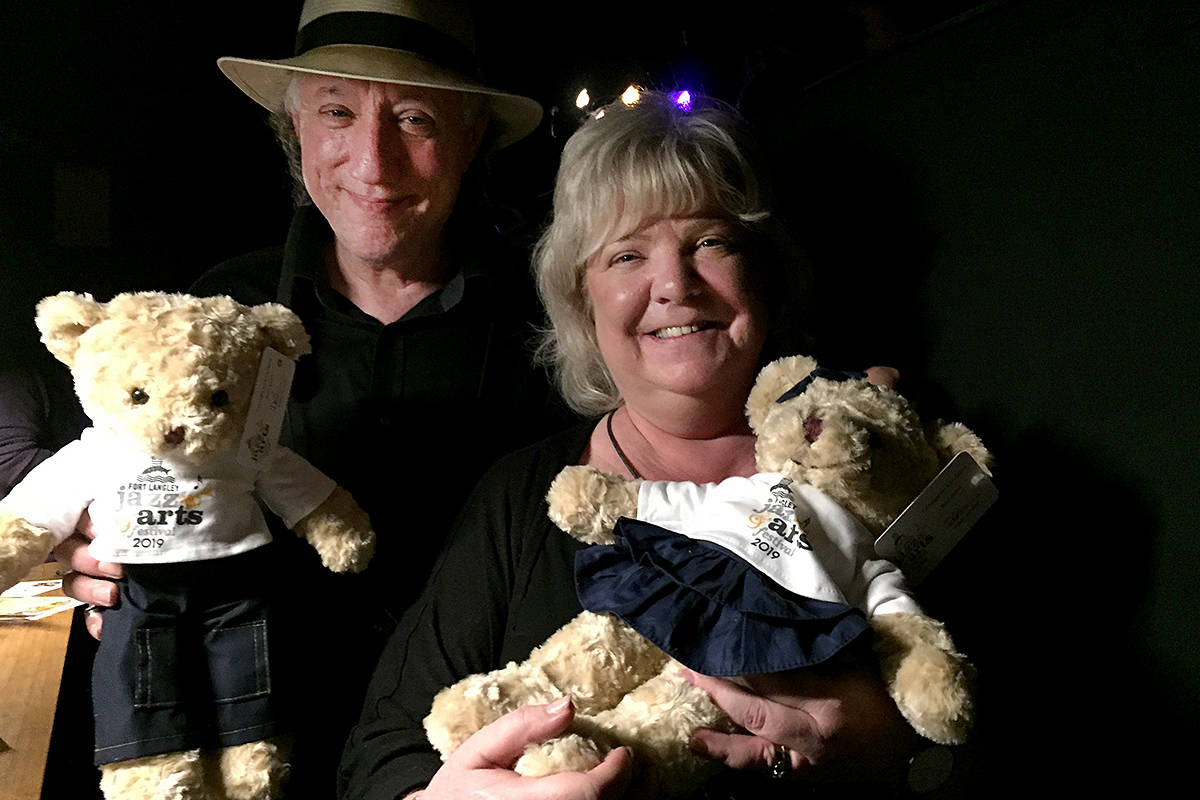 There are festival bears, made by a Korean trained bear maker at Bear Ga – a new Fort Langley store – that are being sold for $30 each. There are only 120 of these limited edition keepsake bears (60 girls and 60 boys) and they’re available at the Bear Ga store or at the festival. Festival organizers Dave Quinn and Karen Zukas showed off the bears at a recent festival pre-event. (Roxanne Hooper/Langley Advance Times)