Rich Coleman says he’ll miss the people the most.

After 24 years in politics, the Langley East MLA is retiring, timing his announcement for Saturday to coincide with the anniversary of his first nomination on Feb. 29, 1996. He was elected for the first time on May 28, 1996.

“It’s time to hang up the skates,” Coleman said.

Coleman explained he was making the announcement now out of consideration for his party colleagues, who need to be ready for the next provincial election.

It wasn’t an easy decision.

“It’s gut-wrenching, actually,” Coleman told the Langley Advance Times during an interview in his office at the Langley Events Centre (LEC) shortly before making it public.

He started seriously considering retirement after a friend told him he was “at the very edge of having stayed too long,” then made his decision after talking it over with his wife, Michele.

Among the highlights of his political career, he includes the creation of LEC sports complex on 200th Street, a building that he helped get off the ground by brokering a $15-million provincial government grant.

That led to construction of the 5,500-seat space as part of the largest sports and recreation project in Langley’s history.

A while after the LEC opened, when Coleman was looking around for a new constituency office, someone suggested he should check out some available space in the centre.

“This was an accident,” he commented.

On the day of the interview, he was using a large desk in his LEC office meeting room to fill out birthday cards for constituents, cards that were hand-made by Michele and her scrapbooking group.

“A lot of these go out to some cool people,” he commented.

He’s enjoyed his time in politics, especially the opportunity to go places and meet people.

“I’ve been in probably every dam in British Columbia, most mines — underground and above ground — [and] through mills and pulp mills.”

He also cited his part in negotiating a settlement to the softwood lumber dispute with the U.S. that he felt gave the B.C. forest industry nine years of peace and stability.

In addition, he recounted his tour of duty as minister in charge of housing, travelling abroad to educate the world about B.C.’s considerable reserves of natural gas, getting the Pacific Autism Centre in Richmond built, and the opportunity to talk with actor Martin Sheen at an event where Sheen spoke out about the personal impact of addiction.

It is the people part of politics Coleman likes the best, calling it “one of the most rewarding parts of the job.”

“I’ve got such great stories and friends that I’ve made, just in this community,” Coleman recounted.

“Even those who don’t like, or who are opposed to you, they usually treat you with respect and you can have a decent conversation with them.”

Being an opposition party politician has been quite different from being part of the government of the day makes the decisions, Coleman related.

“It’s almost like you come to a skidding stop,” is how he described the switch from government to opposition benches following the defeat of the BC Liberals – led by Christy Clark – and his temporary stint as acting party leader.

“It’s not the 70 hours a week [you put in] when you’re a cabinet minister. From morning to night, you’re on the go.”

He has learned how to use Facebook and Twitter and email blasts to get his message across, but he isn’t convinced social media can truly substitute for sitting down and actually talking to people, face-to-face.

“You lose that connection with people [when] it’s all done electronically,” Coleman believes.

He may be leaving politics, but he isn’t giving up public life, he stressed.

“I’m not done. I’ve got some ideas for some other adventures,” Coleman declared, without going into detail.

“As far as I’m concerned, I have one more career left in me.”

His health is good.

At 66, Coleman is 85 pounds lighter than he was in 2013, a fact that has allowed him to better manage his Type 2 diabetes.

He got his weight down by drinking lots of water and walking.

His intention is to keep working as MLA until the next election, one he thinks the Liberals have a shot at taking.

“There’s a 50-50 chance that we can win that election,” Coleman predicted.

Appreciated the confidence of voters

He would like the people who voted for him to know that he is grateful.

“They gave me a real privilege,” Coleman said.

“They gave me the most enriching opportunity anybody could ask for. I hope when they look back on me, that they’ll look at me and say, well, he did what he thought was the best for the community and people he served.”

“There just is no better community,” he said of Langley. “It’s just a real caring place.”

Preparing for his so-called retirement, he said he is definitely looking forward to having more time for family.

“I have been so lucky,” he said of his 45-year marriage, his two children, and seven grandchildren.

Announcement not a surprise to some

“I didn’t know the time of it, but we all knew he was wrestling with the decision,” Polak said.

Politics, Polak observed, “is a bit like sports” in the sense of wanting to depart while you are “still at the top of your game.”

And Coleman had game, as Polak described watching the then-cabinet minister in action during question period debates.

“You knew, they [the opposition]were going to get it, the big guy is getting up,” Polak recounted.”

“I have supreme admiration for all he accomplished,” Polak summarized, especially Coleman’s handling of the housing portfolio.

“Rich changed the conversation on housing,” she commented.

Polak said among other things, Coleman can be proud of his rental assistance program that provides confidential help to permit people to stay in their homes

“We won’t see his kind any time soon,” Polak said.

Langley Township mayor Jack Froese said often, when his office referred a caller with a provincial-government-level issue to Coleman, they would later hear how impressed the caller was with the speed of the response.

“There’d be some action,” Froese recalled.

Among Coleman’s accomplishments, Froese listed the Langley Events Centre and the 216 Street overpass as examples.

He said Coleman deserves thanks for looking out for Langley concerns over a “generation”, adding it will be “interesting” to see who can fill the MLA’s shoes.

He “wasn’t that surprised” to see Coleman calling it a career.

“It’s good to see someone go out on their own terms,” Froese said.

“I’m happy for him. He served his community well.”

BC Liberal Leader Andrew Wilkinson issued the following statement in response to Rich Coleman’s announcement that he will not seek re-election:

“During his 24 years in provincial politics and six terms in the Legislative Assembly, Rich was instrumental in the landmark accomplishments of successive BC Liberal governments. Among many achievements as a cabinet minister, he oversaw the delivery of a record number of new housing units for vulnerable British Columbians, stickhandled the softwood lumber file through challenging times, and laid the foundation for an LNG industry that will support British Columbia’s prosperity for generations to come– helping to improve the lives of people all over BC.

“Rich has also been an articulate and consistent voice for the unity of our free enterprise coalition – always stepping up to support his BC Liberal colleagues through numerous campaigns, including as provincial campaign co-chair. During the last BC Liberal leadership contest, he stepped up to serve in a critical role as Interim Leader of the Official Opposition – keeping our team of MLAs united, focused, and effective.“Nearly a quarter-century in public life requires significant personal sacrifices. In addition to recognizing Rich for his years of service to the people of Fort Langley-Aldergrove, Langley East, and all of British Columbia,we thank his wife Michele, and their children and grandchildren, for generously sharing Rich with our team.” 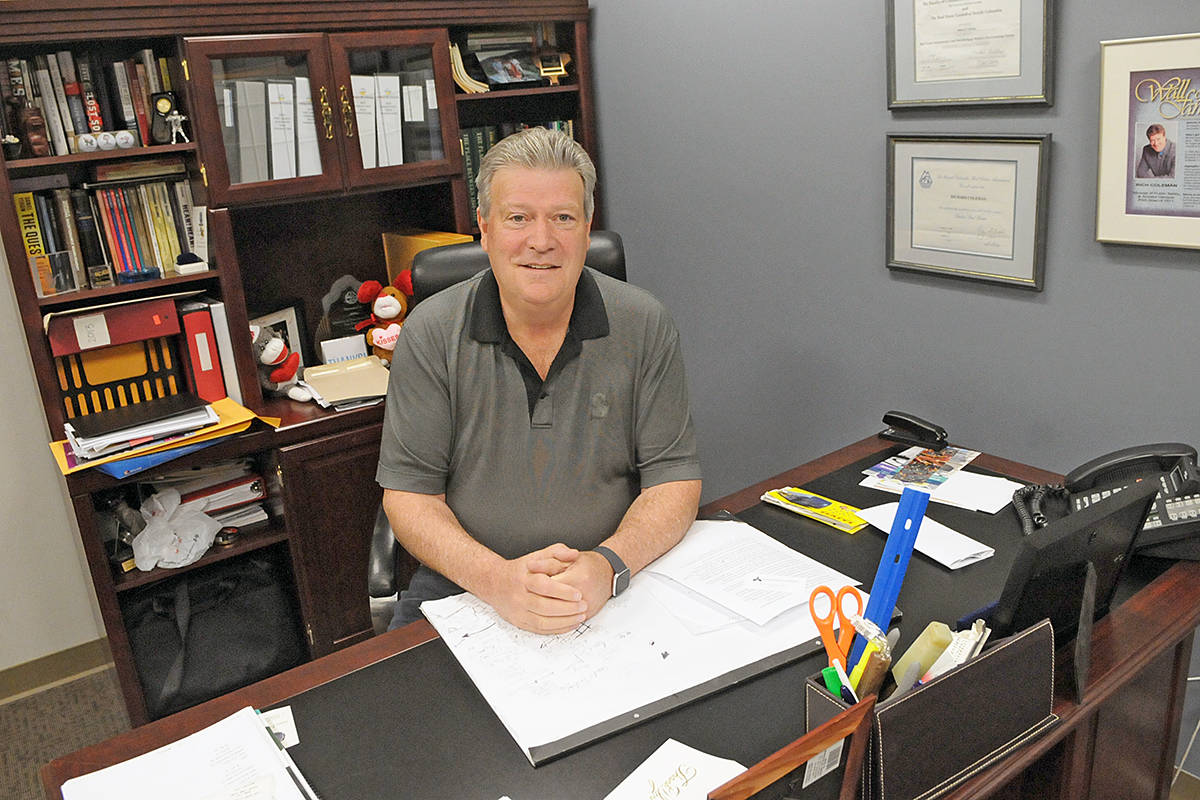 Rich Coleman, in his constituency office at the Langley Events Centre. On Saturday, Feb. 29, he announced he was retiring after 24 years in politics. (Dan Ferguson/Langley Advance Times)