The Tryon 2018 World Equestrian Games (WEG) Canadian para-dressage team comprised of Aldergrove’s Lauren Barwick and South Langley’s Noni Hartvikson, along with Jody Schloss of Toronto and Roberta Sheffield, who resides in Lincolnshire, GBR, has reunited to pick up the mantle at the Tokyo 2020 Paralympic Games in Japan.

The Aldergrove rider achieved it with Sandrino, a nine-year-old Westphalian gelding with whom Barwick has had explosive results since the combination burst on the scene in January 2020. 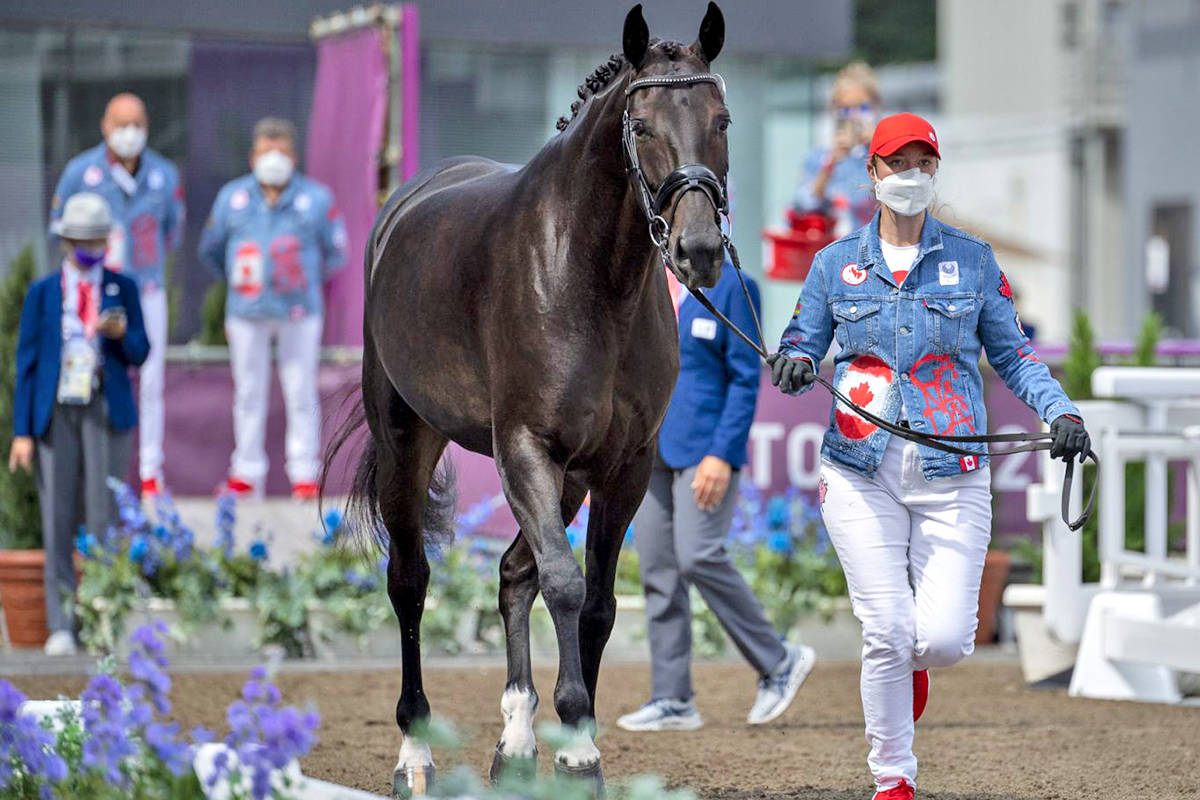 They have never placed outside of the top three in 14 competitions together and most recently, Barwick and Sandrino won the 2021 Adequan Global Dressage Festival in Florida, one of the world’s largest international and national dressage circuits.

“As my fifth Paralympics, I feel like this has been one of the best,” said Barwick, who won gold and silver medals at the Beijing 2008 games.

“We have come together as a team and united. I’m really looking forward to going down the centre line and supporting the rest of the riders.”

South Langley’s Noni Hartvikson, 62, will be bringing over 30 years of dressage riding, coaching and judging experience to her first Paralympic appearance with Onyx, an 8-year-old Hanoverian gelding, who was previously campaigned by Barwick at the Rio 2016 Paralympics.

“I began thinking about making the Paralympic team for Tokyo in 2017,” said Hartvikson. “I was a long time coming into para sport. Then, it became a huge and exciting focus to compete to the best of my abilities on a level playing field.”

Here we go! 👏 Para-dressage competition begins tomorrow in Tokyo. Our Canadian athletes are in the zone and ready to go!#RideToTokyo #TeamCanada pic.twitter.com/AdLJA2FhvG

Para-equestrian dressage competition, which is divided into five grades based on functional ability, begins today, Thursday, Aug. 26, with the individual test for Grades II, IV and V.

Canada’s paralympians, who are in Grades I and III, will take on the individual test and the first chance for a medal on Friday, Aug. 27.

Three combinations will then compete for the maple leaf in the team test on Saturday, Aug. 28, with team medals decided after all grades have performed the following day.

Finally, the top eight combinations per Grade will move on to the individual freestyle on Monday, Aug. 30 for their last shot at an individual medal.

For more information, including the full schedule of equestrian competition and results, click here.

Rumors are swirling that pro basketball could be coming to Langley