Members of the Vancouver Giants will be suiting up with a special jersey this weekend, for one of their at-home games.

The G-Men play back-to-back games at Langley Events Centre, tonight (Friday) and Saturday. And during the latter, they will be adorning a grey/silver jersey that will pay homage to frontline workers.

The Saturday game marks the first of six “Community Heroes” nights being presented by the BCLC, explained Giants senior vice-president Dale Saip. And the entire team will be sporting their commemorative jerseys for the first time.

It’s tribute to those who “kept our groceries stores open, mechanics who kept our vehicles running, and teachers who performed their jobs admirably both online and in the classroom,” Saip explained.

In the meantime, a few other November at home games will be themed, as well, including the JR Country Night on Nov. 13 and the White Spot Legends Night on Nov. 20.

Tonight, the G-Men look to secure their third straight home victory when they welcome 2023 NHL draft prospect Riley Heidt and the Prince George Cougars to town for the second time. The Giants are 1-0 against Prince George so far this season, and can leapfrog them in the B.C. Division standings with a two-point effort.

Then on Saturday, the Vancouver Giants welcome the Portland Winterhawks to town, marking the first time the Giants have hosted an American team since February 2020 – which, by the way, was a win over Seattle

In other hockey news, the Langley-based team, in conjunction with Hockey Canada, announced that represent their country in a national competition later this month in Ontario.

The two Giants rookies were among 66 players invited. The players will be divided into three teams in the coming weeks.

The four-team tournament, which also includes Canada’s National Women’s Team, begins Nov. 26 and runs through to Dec. 1 in Ottawa.

RECENT: Rockets squeak out victory in overtime against Vancouver Giants

Leslie was originally selected 10th overall by Vancouver in the 2020 WHL prospects draft.

The 6 ft. 1 in., 182-pound blueliner has since appeared in 24 games with the Giants, where he’s recorded six goals and four assists for 10 points along with 21 penalty minutes.

So far this season, Leslie is tied for the team lead in scoring amongst defencemen with five points (1G, 4A). Last season as an under-ager he joined the Giants for 17 games in the Kamloops/Kelowna hub and supplied five goals.

Halaburda was selected one round later with the 32nd overall pick in the 2020 WHL prospects draft.

The 5 ft. 11 in., 164-pound centre has produced one goal and four assists for five points through seven games, so far this season.

Four of Halaburda’s five points have come in the previous two games.

On Oct. 29, against Kelowna, he recorded his first career WHL goal, along with an assist. Then earlier this week – on Wednesday – he added two more assists for the Giants in Kelowna.

Hockey Canada announced earlier today (Friday) that the 66 players will be divided into three teams – Team Canada Black, Team Canada Red and Team Canada White – and will compete against Canada’s National Women’s Team as part of its centralization schedule.

“We are excited to unveil the 66 players that will suit up for our three men’s under-17 teams at the Capital City Challenge and have the unique opportunity to compete against Canada’s National Women’s Team in Ottawa,” said Hockey Canada’s senior vice-president of national teams, Scott Salmond.

“Although this has not been a traditional year for our program of excellence and the under-17 group, we are excited to introduce these athletes to an event that replicates short-term, international competition.”

Reminder: Leslie, Halaburda and the rest of their Giants teammates return to action tonight at the Langley Events Centre for a 7:30 p.m. showdown against the visiting Prince George Cougars.

Giants defenceman Mazden Leslie has been named to the Canada U17 team. (Special to Langley Advance Times) 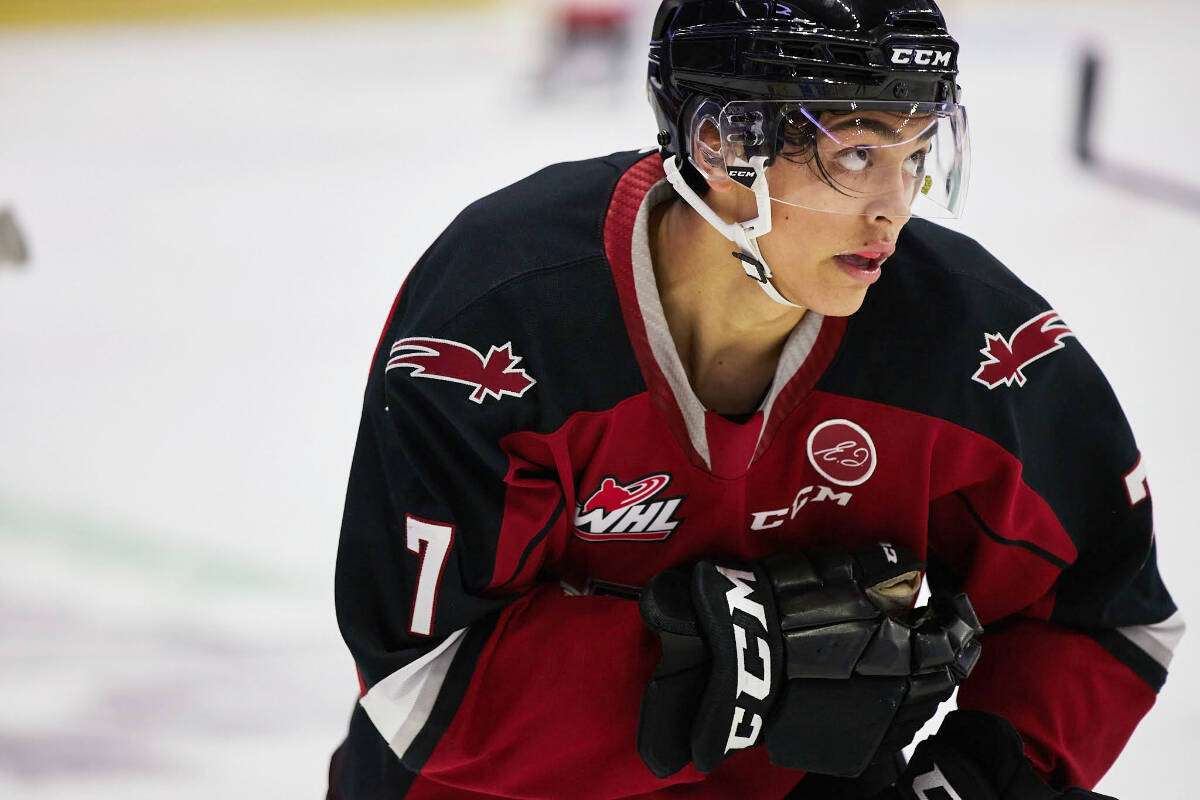 Giants forward Ty Halaburda has been named to the Canada U17 team. (Special to Langley Advance Times)

Rockets squeak out victory in overtime against Vancouver Giants

Brookswood to kick off holiday season with its annual lights festival