Fort Langley has devised another way to commemorate soldiers who didn’t make it back from war.

A series of 24 lamp post banners went up last week in the village, what Andy Schildhorn, president of the Fort Langley Community Association (FLCA), hopes is just the start of a special Remembrance Day commemoration program.

The village’s banner program has been in the works since July.

Working with a grant from Veterans Affairs, the FLCA connected with the Langley Centennial Museum and local historian Warren Sommer to kick off the banner program this year.

They were able to secure two dozen pictures of veterans from the First World War, images that were of sufficient quality and size to be enlarged for the 32 by 61-inch cloth banners. Each including the person’s likeness, their name, and the words “Langley Remembers.”

Over the upcoming years, Schildhorn said he and others with FLCA hope to expand the Remembrance Day campaign to include many more veteran banners, potentially doubling the current number.

“It’s a way to help the community remember… These people, they were 18 or 19 years old… they went to fight a war and they lost their lives. It’s important to remember the ultimate sacrifice they made,” Schildhorn said.

“In today’s society, we don’t have any kind of experience like that, so we feel it’s very important that we not forget.”

The response he’s received, so far, has been “very appreciative,” calling the initiative a meaningful way to bring the community together.

“They are so beautiful,” added Sandra Stewart Cameron.

“These are so perfect,” Bre Black added.

Others used words such as outstanding, wonderful, fantastic, and amazing to describe the initiative.

In the meantime, a similar program has been run by the Downtown Langley Business Association (DLBA) for a decade now.

The DLBA’s banner initiative has received provincial and international recognition, with many communities replicating what they saw in Langley City, said executive director Teri James.

While that’s flattering, she said the most meaningful aspect of “this passion project has been, by far, meeting so many people who gave of themselves for us, and hearing how they served their country, and honouring them in such a unique and genuine way…” James said.

In the initial program, the DLBA worked with the local legion and professional photographer Brian Bury to have pictures taken of the local veterans.

When it came to replacing the aging banners a few years back, they used all the original pictures and added 35 more – using pictures that were taken during a photo shoot at Langley Lodge, as well as others that came in the form of private submissions.

“It was a huge honour for me to work with our local legion for the first set of banners, and then again working with the families at the Langley Lodge to photograph their loved ones. It was quite humbling to spent time with genuine heroes and hear their amazing stories either from themselves or their families,” James said.

The DLBA banners always go up the last week in October, and remain in place until mid-to-late November every year, James said. 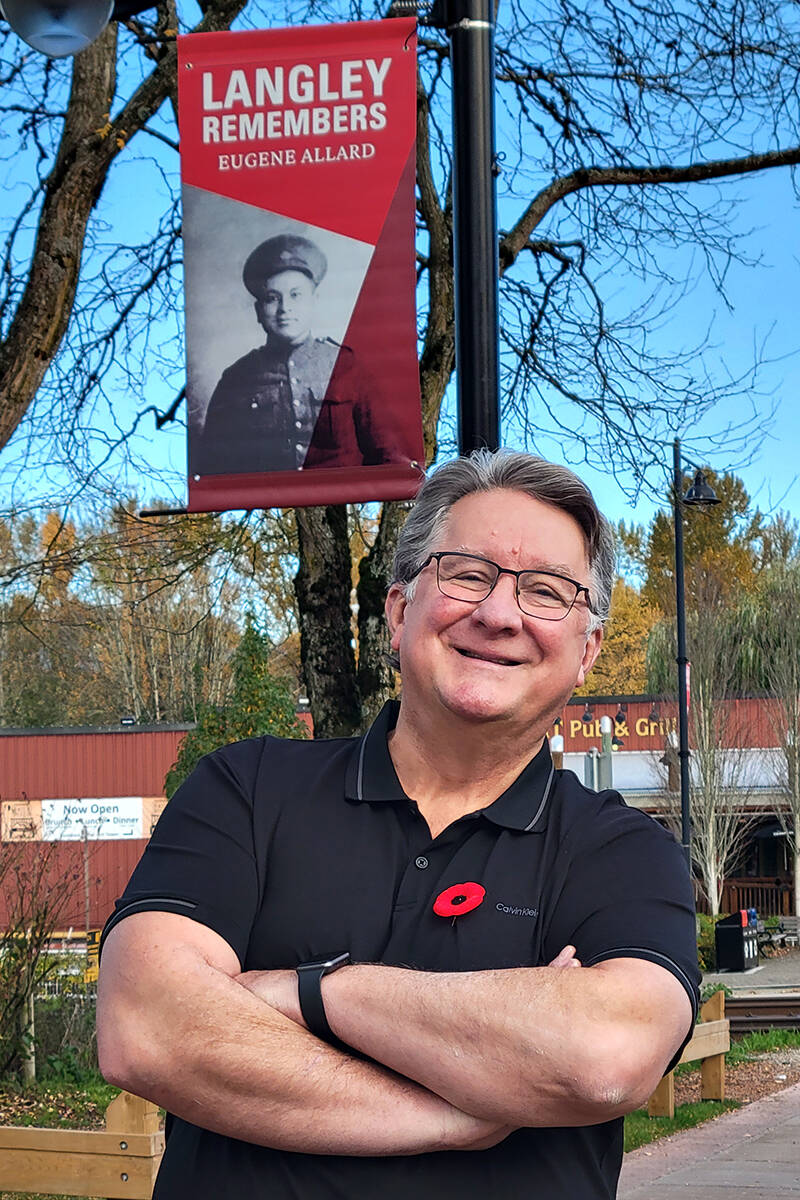 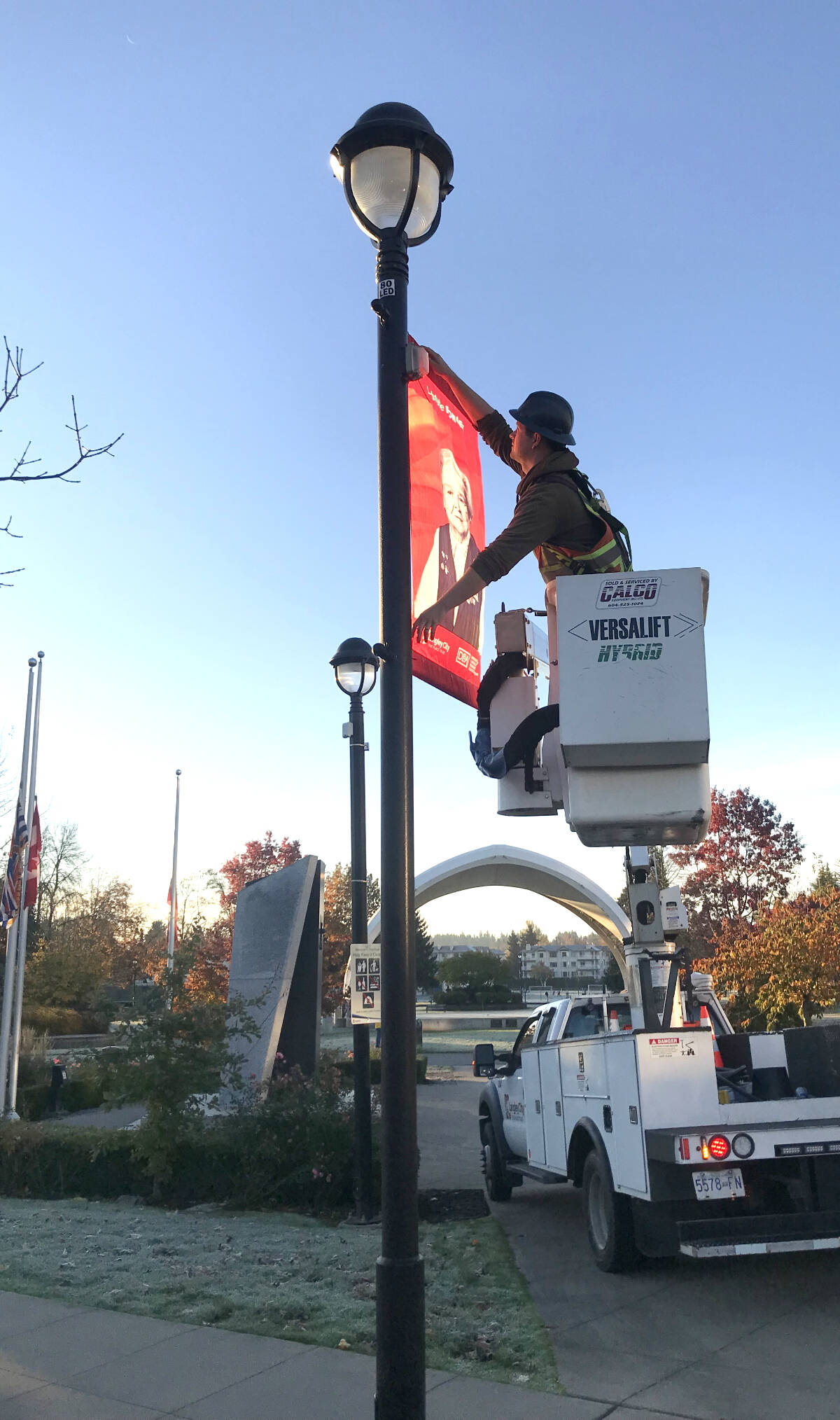 Remembrance Day banners have been a fixture in Langley City for a decade now, thanks in large part to the Downtown Langley Business Association and several key individuals. (Special to Langley Advance Times) 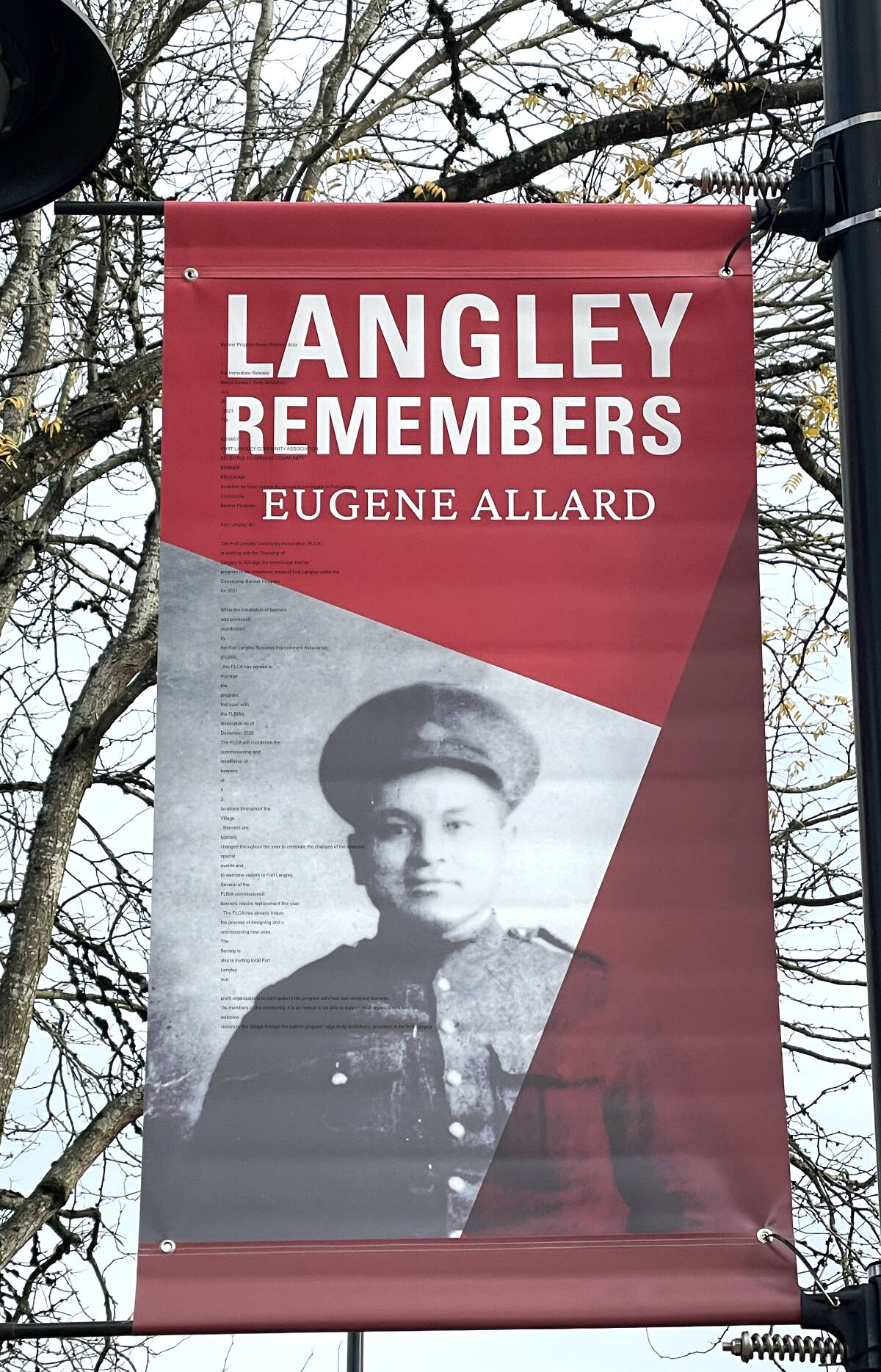 A series of new Remembrance Day banners have been hung in Fort Langley, with organizers hoping to expand the program in the years to come. (Special to Langley Advance Times)